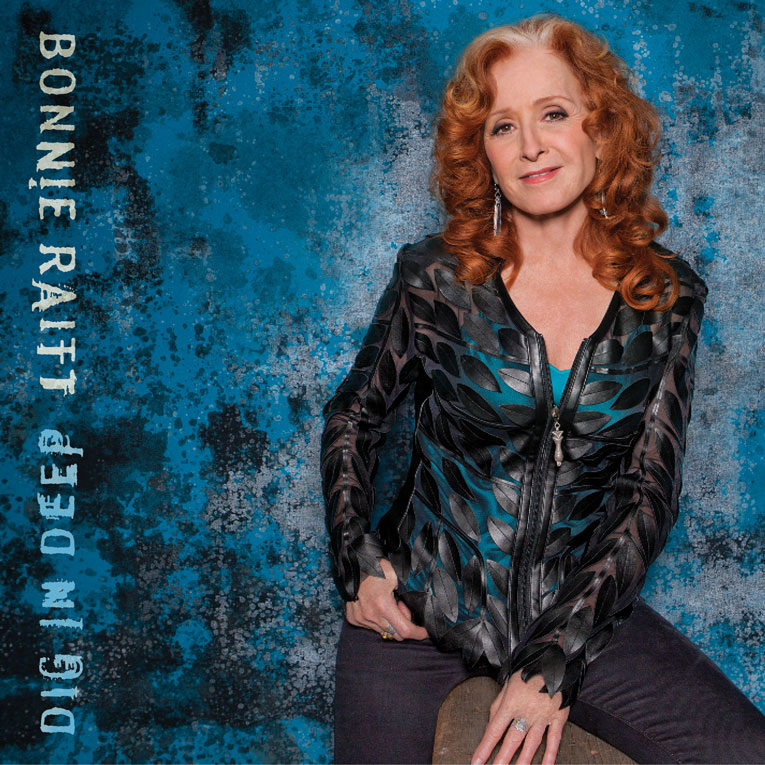 Dig in Deep, Bonnie Raitt’s new album released on February 26th, 2016, is without question, her best album in years. Recorded on Redwing Records, her own label, Raitt produced the album herself and wrote five out of twelve songs. With her fingerprint on just about every aspect of Dig in Deep, Raitt put out an album that is true quality from start to finish and one that showcases her love of blues-rock and meaningful ballads.

This album rocks. It also might tear at your heart.

Dig in Deep is real music. Raitt sings and plays guitar like she means it. With her unmistakable tone, Raitt’s vocals slide from sultry to melancholy and then to blues-rock in seconds. There’s also no shortage of truly great musicians to accompany her in the band with George Marinelli on guitar, James “Hutch” Hutchinson on bass, Ricky Fataar on drums and Mike Finnigan on keyboard. Finnigan played on Billy Gibbons and the BFG’s new album, Perfectamundo.

Dig in Deep represents what Bonnie Raitt and her band can really do.

The opening track, “Unintended Consequence of Love,” and written by Raitt, is a funky, blues-rock tune with her trademark slide guitar running throughout. Raitt’s vocals are soulful but full of spice. Her vocal phrasing, always a treat, lifts off the beat and then leaves space where space is needed. Mike Finnigan’s Hammond B3 organ provides punch and groove in concert with Fataar’s solid drumming.

“I Need You Tonight,” the second track, is another song with a distinct, tasty groove. Marinelli’s guitar licks smack of raw tone and slapping rhythm, reminiscent of some great guitar rhythms from a couple of decades ago.

“All Alone With Something to Say” is my favorite ballad on the album. The lyrics cut deep and touch on regret and owning up to one’s part in the downfall of a relationship. As I listened to it the first time while driving the streets of L.A, this ballad cut through my veneer, the one I wear when traffic at 5pm is a jammed parking lot. It summoned not just sadness and longing but a real appreciation for the songwriting. The acoustic and electric guitar by Marinelli is truly inspired. Raitt throws herself into this tune and the result, at least for me, was to stop and catch my breath.

There are several up-tempo, rock tunes on this album, including “Shakin’ Shakin’ Shakes,” co-produced by T Bone Burnett. With screaming guitar licks, chugging drums, and Raitt’s powerful vocals, this song made me want to grab drumsticks and tap out the rhythm on my desk top.

“If You Need Somebody,” written by Raitt, is another of my favorites. Raitt sings from her heart on this song, something you won’t find on over-produced, current pop songs. She sits tight on the verses and bends the notes in all the right places.

Unlike some other vocalists who over sing, Raitt has emotional command of her voice without using tricks or gimmicks meant to impress audiences. With TV shows like The Voice and American Idol, we can get accustomed to over singing, and to auto-tune to correct pitch. We can forget just how impressive it is to listen to a vocalist who sings from the seat of her soul with her feet firmly planted on the floor. This is Bonnie Raitt. She offers herself through her music, which actually makes listeners feel something.


Why Dig in Deep wasn’t nominated for a Grammy Award, except for a nod for best engineered album, is beyond me. Raitt’s last album, Slipstream, won a Grammy for best Americana album.

There are one or two forgettable tracks on the album, songs that just don’t go anywhere. “You’ve Changed My Mind” didn’t do anything for me, maybe because it drags a bit. For a ballad, that’s the kiss of death. But the final track, “The Ones We Couldn’t Be,” is just the opposite. Beautifully written by Bonnie Raitt, she weaves a story about a relationship breakup while trying to figure out what exactly kicked the can down the road.

And though it seems much kinder
Just to leave some things unsaid
Like all the ways I tore myself apart
If you really want forgiveness, better
Try the truth instead.

Bonnie Raitt, Dig in Deep is available on: