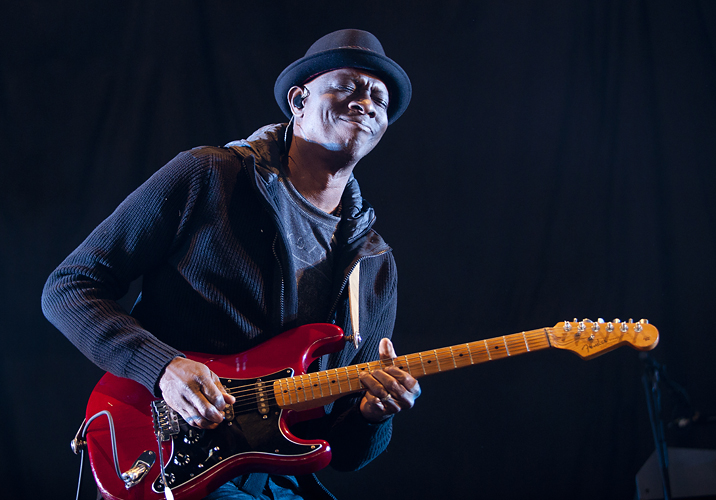 The way to experience Keb’ Mo’, if you haven’t already, is to see him live, which I did in March of this year at the Fred Kavali Theater, in Thousand Oaks, CA. I’d already appreciated Keb’ Mo’ before that concert but seeing him live opened a window to the unique eminence of this great blues musician, singer/songwriter, and guitarist.

Listening to That Hot Pink Blues Album is the next best thing to being there. Capturing Keb’ Mo’s 2015 concert tour, this album has sixteen tracks from concerts in nine cities that his house engineer spontaneously recorded at the beginning of each show. According to the website, it was an unplanned move. Obviously a successful one.

Like all of Keb’ Mo’s music, this album is fun, uplifting, moving, and at times humorous. It conjures tastes of the South on a warm but not-too-humid evening at a backyard barbecue. Listening to the two-disc collection, Mo’ lures me to places I want to be.

I’ve thought about what makes Keb’ Mo’ such a beloved artist. Sure, it’s his voice—gentle, laid back, soulful, and with beautiful tone. His guitar playing, whether on his Gretsch Electromatic, Mesa Boogie Mark Five 35, his signature Gibson Bluesmaster, or Reso Rocket (among others,) springs forth roots of Delta blues with contemporary flair. Maybe part of what makes Keb’ Mo’ so special is his calm presence that comes through his music. His honesty is soothing and the rawness makes it powerful. He is a true storyteller.

With such versatility, Keb’ Mo’ created That Hot Pink Blues Album with songs that reveal a variety of blues flavors with dashes of country, folk, jazz, rock and R&B. For example, you’ve got “Henry,” one of my favorite acoustic songs, which previously appeared on the album, Slow Down, that’s a combination of blues and folk. And then there’s the R&B/pop tune, “She Just Wants to Dance,” which features his trademark slide.

“Dangerous Mood,” which blues fans will certainly recognize, is an eight and a half minute, must-hear version that swells with the crowd’s whooping and whistles in the background of this track. This is blues at its best with tasteful guitar licks and some excellent organ chops by Michael B. Hicks and drumming by Casey Wasner. It’s a truly soulful version with spaces between the builds that provide room for smooth guitar solos by Keb’ Mo’.

“More Than One Way Home,” with an R&B backbeat, is some nice storytelling with catchy guitar riffs. You can just tell Keb’ Mo’ is feeling it while sharing his story. Check out the acoustic version of “More Than one Way Home” on this video, Live Piazza Blues Italy.


“And when the eagle flied on Friday I’d go out to play
Wastin’ time with Otis out on the dock of the bay
And my ticket to adventure was a ride on the bus
Different places, different faces but they were just like us

With little or no mechanics on his voice and maybe a few guitar pedals to tweak the sound, That Hot Pink Blues Album is like turning back time but with a modern twist. Keb’ Mo’s beautiful voice tone has a few welcomed, scratchy edges. He performs soulful, contemporary blues with a tight trio, namely Casey Wasner on drums, Stan Sargeant on bass and Michael B. Hicks on keyboards.

As a three-time Grammy Award winner for contemporary blues album and many more credits to his name, Keb’ Mo’ has created an album that’s a good primer for those who haven’t heard much of him and a feast for those who have.