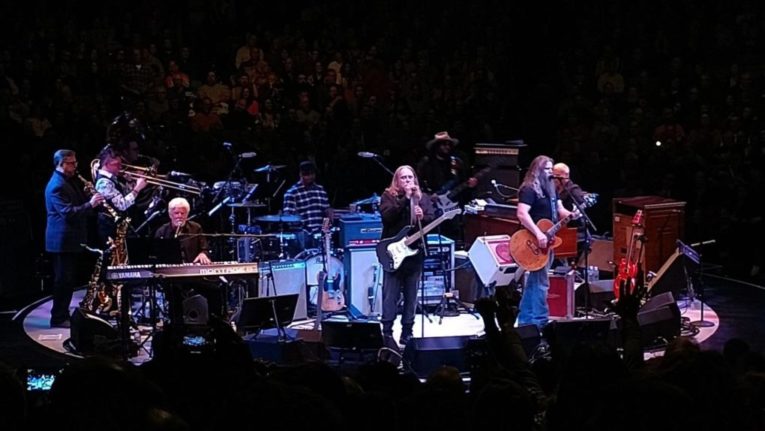 by Michael A. Weiss

Staying true to each respective member’s prodigious musical bloodline, this “super group” not only masterfully performed the songs from The Last Waltz movie and communicated its inimitable Americana sound, but each of these inspired musicians injected pedigreed signature sounds into a performance that quite possibly transcended the cinematic historical event. This pitch-perfect interpretation of the 1976 legendary concert was as cool as it was extraordinary.

What began as a milestone-achieving farewell concert morphed into a cultural musical celebration when The Band sought to document the event and were joined by more than a dozen special musical guests including Bob Dylan, Neil Young, Ronnie Hawkins, Dr. John, Joni Mitchell, Van Morrison, Muddy Waters, The Staple Singers, Ringo Starr and Eric Clapton. Two years later, director, Martin Scorsese’s love for the music and understanding of the farewell concert’s significance, resulted in the remarkable 1978 documentary, The Last Waltz. It is still hailed as the benchmark for rock ‘n’ roll concert movies.

Jamey Johnson opened the show with a strong rendition of “Up on Cripple Creek.” Then Michael McDonald surpassed all vocal expectations with a most energetic and declarative version of, “The Shape I’m In.” Warren Haynes introduced the audience to his broad vocal range and limitless singing styles with “Stage Fright.” As I sat in the sold out, 1800-seat theater, I realized that I was witnessing the greatest cover band in the history of rock ‘n’ roll.

Then something I’d never experienced occurred when they played “Georgia On My Mind.” Each band member started making deliberate, mind-bending blues and jazz DNA-derivative contributions, driving the “super group” to an even higher level of musicianship.

“Life is a Carnival” featured Michael McDonald’s soulful vocal chops set against a majestic brass section, replete with every horn imaginable. The roof kept rising. On each and every song McDonald and John Medeski provided electrifying keyboards, matching the exhilarating vocals, harmonies, guitar jams and synchronistic brass horns. It was The Band’s music with dulcet sounds of Little Feat, The Grateful Dead and The Allman Brothers Band that intensified the listening euphoria.

Drummer Terrance Higgins and bassist, Don Was, had now formed a comfortable “beat pocket” enabling McDonald and Haynes to improvise during “It Makes No Difference,” perhaps the prettiest love song ever sung. Haynes set the bar high when singing the first two verses. When Michael McDonald joined in, he transformed the rest of the song’s forlorn lyrics into a religious experience, which Haynes and the horns perfectly supported until the very last note. That’s when I realized that I was witnessing a magical evening of musicians’ musicians cherishing the opportunity to entertain an audience with music they loved. Levon Helm, Richard Manuel and Rick Danko, deceased members of The Band, would’ve been mighty proud.

Words will not suffice to describe the collective happiness shared among the 1,800 people in attendance at this soul-soothing, mind-numbing concert so below I have posted videos of a few of the songs performed. To be sure, none were highlights of the concert; they all were. This was live music at its finest.

The first set continued with,“Down South in New Orleans,” “This Wheel’s on Fire,” “Who Do You Love?,” “King Harvest” “The Night They Drove Old Dixie Down.”

The second set consisted of “Chest Fever,” “Ophelia,” “Caravan,” “Helpless,” “Mystery Train,” “Rag Mama Rag,” “Mannish Boy,” “Caledonia Mission,” “Forever Young,” “The Weight” and “I Shall Be Released.” The encores were “Such a Night” and “Don’t Do It.”

At the moment, this is only scheduled as an 11-date tour so hopefully record-producer-extraordinaire, Don Was, will soon produce official recordings of these shows.