Album Review: Give It Back To You by The Record Company 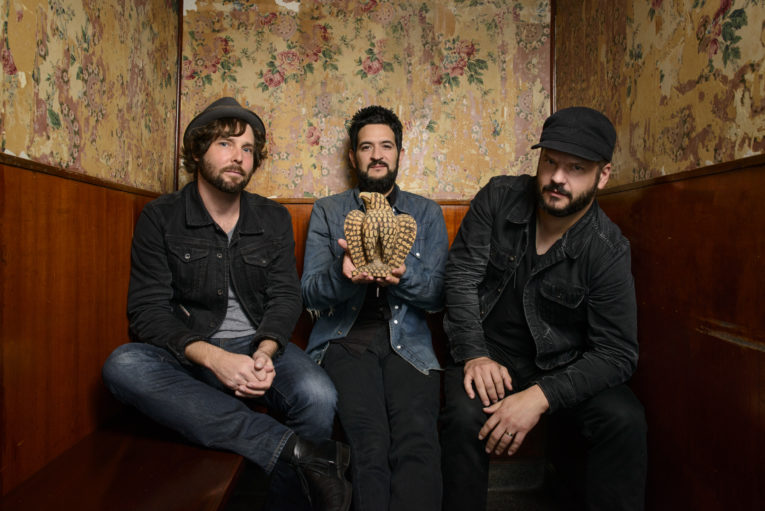 Any good band is always equal to more than the sum of its parts. This is especially true of trios. A tight trio has an energy and connection you can feel whether the music is hard or soft, fast or slow – hence the term, “Power Trio.” From the Jimi Hendrix Experience to Rush to The Jam to Green Day and everyone in between, the musicians in a trio fuse together on a molecular level in ways that larger bands do not. There is more sonic room for everyone, but that also means there is more sonic responsibility for every member. That oneness of purpose, shared focus and commitment to the groove is what makes trios jump off the turntable (or hard drive) and into your head.

The Record Company is one such trio. Give It Back To You was nominated for a Grammy Award for good reason. What I heard is a minimalist but not stripped-down rock and soul band that adds a bit more funk to music and reminds me of Morphine (another badass trio) mixed in with some Al Green soul and occasional flashes of old-school hard rock.

First track (and first single) “Off The Ground” is the right choice for the opening salvo of this recorded-in-our-living room album. The song begins with a rolling, funky bass line and matter-of-fact lyrics from lead singer and guitarist, Chris Vos, that leads into a soul-clap call-and-response chorus of “ooh-ooohs.”

The handclaps and audience shout-alongs continue in the next track, “Don’t Let Me Get Lonely,” but with more of a rockabilly-flavored boogie driving the show. Next up is the second single off the album, “Rita Mae Young,” a classic lament of heartbreak hung on a strong bass, a rata-tat snare-heavy beat and a few fat lap steel chords.

“On The Move” is another heartbreak lament but fastened to more of a big beat Zeppelin-esque blues groove, complete with harmonica fills and some Vos falsetto. It is followed by “Hard Day Coming Down” that dips more into the handclappin’ and foot stompin’ Country Blues territory.

The groove gear comes back, along with the ubiquitous audience friendly “Hey Hey Hey’s” in the next tune “Feels So Good.” And feel good it does, this song, perhaps more than any of the others, shares that Morphine DNA that makes nearly every song in this collection sound like a candidate for a good long workout in a live situation; a chance for the band to test the hip-shaking endurance of a crowd. “Turn Me Loose” dials down the tempo while turning up the intensity in a nearly Swamp-Rock stomper.

The title track “Give It Back To You” comes next, firmly lodged in the band’s funky wheelhouse of handclaps, groove-defining bass and juuuuust slightly behind the beat (on purpose) vocals. There is enough sonic room for everyone which, in the context of a trio, means plenty of room for inventive fills from the bass and the drummer but, thank God, not enough room for bass or drum solos. All three musicians combine to keep the engine of this song moving down the track.

The albums closes out with two tunes that drift further afield. “This Crooked City” showcases Vos’ falsetto vocals for a slow one that reminds me more of an Eagles ballad than anything else. Where you stand on The Eagles will determine your level of enjoyment of this one. The album closer, “In The Mood For You,” has the most Nuggets-esque vibe from the dirty guitar chords that dominate the song to the crackly vocals and of course, some “Yeah Yeah Yeah’s” for the audience to latch on to.

This trio, like the best of them, has the ability to focus its energy like a laser. All three musicians support each other while gladly submitting to the power of the groove they’re creating. That’s when magic happens. Three become one and take the listener on a ride worth taking.

Give It Back To You Can Be Found: