Album Review: Chills & Thrills by Bernard Allison. The Blues is in Good Hands! 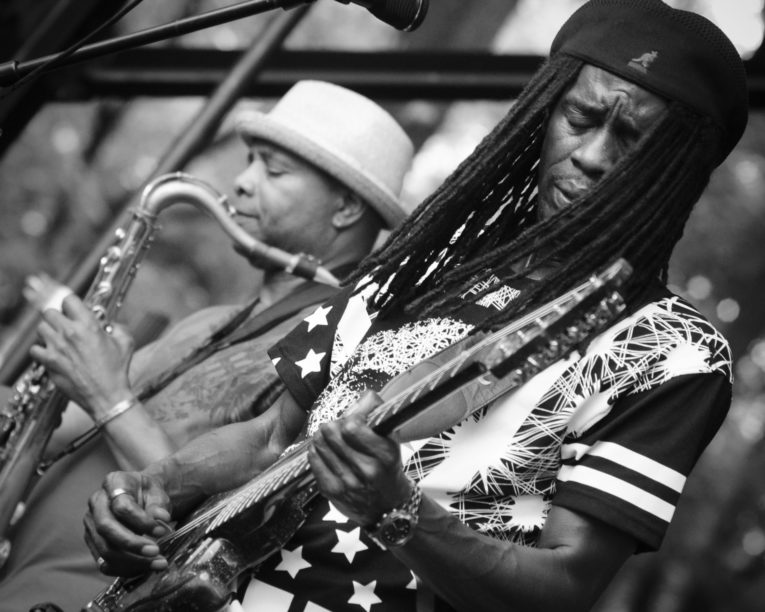 OK blues fans, it’s summer. We’re all looking to relax and get our groove on. Why not let guitarist Bernard Allison lead the way? All you have to do is go back a few years to his 2007 release, Chills and Thrills (Jazzhaus Records) and he’ll deliver exactly that.

As the son of the late Chicago blues guitarist Luther Allison, Bernard Allison has been on the blues scene for his entire adult life. Beginning right after high school, he went on the road with the legendary Koko Taylor (where he was mentored at various points by Johnny Winter and Stevie Ray Vaughan.) Later, he became the touring band leader for his father and eventually went on to lead his own successful and well-respected band.

I had the pleasure of seeing Bernard Allison perform on stage in 2014 at the Pittsburgh Blues Festival, so I can attest that the way he rips it up live has been captured beautifully and accurately on Chills & Thrills.

Allison’s nicely controlled Jimi Hendrix-inspired tone kicks things off on the title track, a snappy, mid-tempo funky song, which allows him and his wonderfully solid band the chance to relax into the groove and set the pace for the rest of the album. I love the simple but effective way they pause and then restart that groove, like downshifting, coasting and then popping the clutch on a sleek sports car, hugging a winding back road. When Allison’s guitar solo kicks in, packing equal parts bite and sophistication, it will command your attention. Good news: that caliber of soloing is consistent throughout this record.

Enter the classic blues shuffle with “Boogie Man.” It has just a hint of Stevie Ray Vaughan in its intro, its general feel and certainly during the outro lead guitar (I wonder where that influence might have come from?) but it’s distinctly its own song. Especially nice are the juke joint piano and the dirty organ solo.

There’s more beautiful keyboard work on the opening of “So Divine,” which is quickly joined by a small brass section, including a featured alto sax solo. The fade out is carried by another ripping guitar solo. No complaints here.

Song order on an album has always been very important to me. In that regard, the next two songs, “When I’m Gone” and “Missing Tyrone” are well juxtaposed; the first in its rawness, opposite the second in its classic sophistication.

Just as I’d thought, “Hey, there’s no slide guitar on this blues album,” guess what? Oh, yes there is. And wouldn’t you know? It turns up on “Just My Guitar and Me.” It’s well worth the wait. That slide guitar returns later on “Black and White.”

“Compromising for Your Needs” is not an epic song arrangement; quite the reverse. Its basic structure is simple and repetitive. It does, however, allow the band to come down and ride cruise control while the boss does his usual turn up and burn down fretwork.

On “Heart of St. Paul,” the listener might be fooled into thinking that the band has wandered into the realm of faster tempos but it’s just the drummer’s focus on the upbeats that seems to move things along.

“Groove With Me” offers more funkified, bluesy goodness at a tempo that makes it easy to digest. Wah-wah pedaled guitar weaves almost seamlessly with a soft touch on the keyboard, as a snappy bass line and precocious drumming slyly coax the listener’s hips into motion. Rarely have four minutes and three seconds been put to such good use as they have here.

There are a few moments of real beauty on Chills and Thrills. “That’s Why I’m Crying,” previously performed by the aforementioned Koko Taylor, seems to be done as a tribute to her, with little or no changes made to her version. “Serious” is a deeply soulful track, carefully produced with sustained organ chords, female backup singers working off of Allison’s plaintive vocal and set at a slow simmer. Perhaps most beautiful for me is the second version of this song, “Serious (After Hours),” a very spare take with guitar, keyboards and Allison’s lone vocal – no bass, drums or backing vocals. It’s exactly as you’d expect to hear it performed in a club or a dive bar, after the crowd has left, the doors are locked and the rest of the band have packed up. Just one more song as the bartender cleans up and counts out the register.

If you’re a fan of Bernard Allison, you probably dig this album as much as I. If you don’t know his work, Chills & Thrills is a great place to start.

Chills & Thrills Can Be Found: