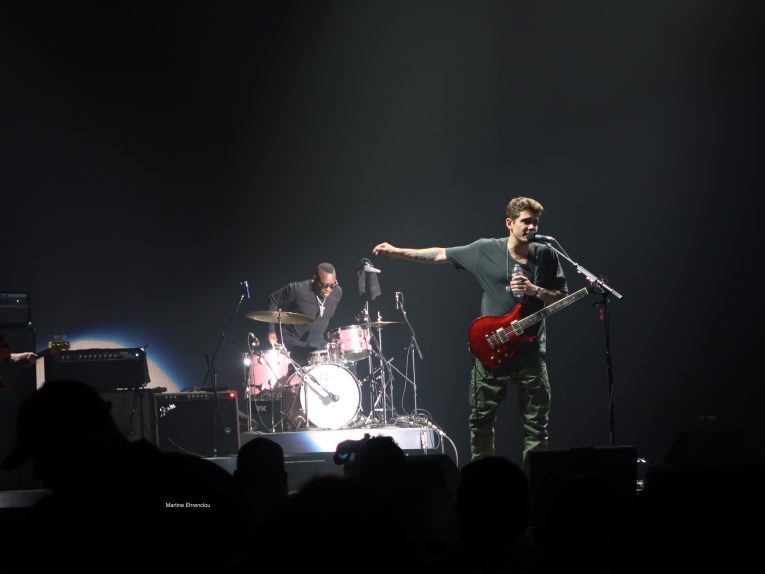 Years ago, I’d drifted from John Mayer’s music for a variety of reasons. But over the last six months, I’d discovered videos of Mayer playing the Blues. Impressed by his guitar playing and some of the blues musicians he played with, I quickly dispensed with thumbing my nose at him. The videos I discovered are just outstanding, his guitar playing so deft and innovative. Talk about emotional riffs and solos, something I didn’t hear often in his pop music. There’s another side to John Mayer that some don’t know about.

It is that side of him that led me to his “Search for Everything” concert at The Forum, in Los Angeles on July 30. I wasn’t fooling myself, I didn’t think I was going to see a blues concert, but I wanted a glimpse of him playing guitar, up close and personal.

Right off, I’ll say that the theme for the concert was very creative and the production was spectacular in a cool, hip, understated way, right down to the lighting. The concert was crafted in chapters as if in a book, with titles on a large screen behind Mayer and the band.

The show kicked off with Chapter 1, featuring John Mayer and his whole band, complete with two backup singers. They launched into, “Helpless” a fun groove-tune with great guitar work by Mayer on his Strat.

Pleasantly surprised, I rose to my feet along with the mostly Millennial crowd. Two young girls sat next to my friend who accompanied me. Their ear-piercing screams knifed though parts of “Helpless.” One of girls shouted to Mayer that she wanted to have his baby. Obviously, she had not read or heard about the controversial Playboy interview with Mayer.

Grabbing his acoustic, Martin guitar for “Georgia,” a fingerpicking tune, Mayer created such rich resonance mixed with crisp tone. Nice chord progressions too, at least in the rendition he performed that night.

“I Don’t Trust Myself” featured Mayer in typical breezy, pop style, but his guitar chops had me. Truly, he is a magnificent guitarist and a talented songwriter. That may not be apparent by his commercial hits, but the talent is certainly there.

Mayer’s band that night was composed of extraordinary musicians; Steve Jordan on drums, Pino Palladino on drums, Larry Goldings on keys, David Ryan Harris on guitar, and Isaiah Sharkey on guitar. The backup singers (Tiffany Palmer and Carlos Ricketts) added a certain depth and almost gospel feel to the evening.

A few more popular songs later, Mayer had another beautiful Strat in hand. He and the band closed out the first chapter of the set with, “Moving On and Getting Over,” a little soul groove number. Mayer’s guitar licks at the end of the tune were outstanding

Chapter 2, the acoustic segment of the evening, began with Mayer alone on stage with his acoustic guitar, another Martin. He played and sang, “Emoji of a Wave,” and as soon as I was about to roll my eyes over that name, I was struck by the beauty of the song. Maybe part of it was Mayer allowing himself to give into the music. His fingerpicking on that tune was pretty impressive. The audience sang along and I have to say that between Mayer on guitar (no other instruments) combined with a packed house singing this song, it was a bit magical.

The last song of the acoustic set began with a jazzy intro by Mayer and blended into, “Neon.” Regardless of how you feel about “Neon,” check out the video below.

Chapter 3 was titled, The John Mayer Trio. This segment was breathtaking, really. Just John Mayer, Pino Palladino on bass and Steve Jordan on drums. They were so tightly knit, hot and bright. Mayer’s intro solo before the song, “Vultures” was truly inspired. A short documentary was shown about the history of The John Mayer Trio, which highlighted Mayer’s musical roots.

“Wait Until Tomorrow” (Jimi Hendrix cover) was worth waiting for. This was definitely the best portion of the show, for me anyway. Mayer’s guitar playing was outstanding, breathtaking in spots and the bassist and drummer were so in sync, so in the groove. Mayer displayed his true guitar chops in this segment.

This is why I was there. To see John Mayer cut loose and depart from the commercial hits.

The trio then played a blistering rendition of “Crossroads” (Robert Johnson cover.) Another winner. They went full out on this song.

Chapter 4 brought back the full band and a few surprise guests. On “Still Feel Like your Man,” a soul infused R&amp;B number, Tommy Lee (Motley Crue) joined them on a second drum set. Mayer sang falsetto on certain parts (as he did a few times during the night) a la Curtis Mayfield. Post Malone (rapper) joined Mayer for this song and the two partnered on vocals and guitar. Post Malone played a Louis Vuitton telecaster. That’s all I’ll say on that.

One highlight of the night was singer-songwriter-guitarist, David Ryan Harris, who sang the intro to “The Beautiful Ones” by Prince. Bathed in spotlight, the stage dark, Harris’ voice rung out into the stadium. His voice was so beautiful, I turned to my friend right away and asked her, “Who is that?” A stunning talent. Below is a short clip of Harris.

The next song struck me as particularly poignant. The lighting changed to warm tones and lights appeared like candles on stage with a chandelier that could have been in a Texas bar. As the band started to play the song’s intro, Mayer said to the audience, “A message from myself to myself.” The mood shifted to a more somber tone as Mayer started in on acoustic guitar on a song that is certainly introspective and revealing about him. The lyrics speak of hiding in one’s mind, which seems like a fit for the person I saw that night.

After a few more of Mayer’s commercial hits, the show was about to close. After the encore of “Blood” and “Gravity,” the stage was cleared. Mayer sat down at a white piano. The stage was bathed in a gray/white hue. On piano he played and sang, “You’re Gonna Live Forever In Me,” another beautifully written ballad by Mayer. Soulful, melancholy and exquisite.