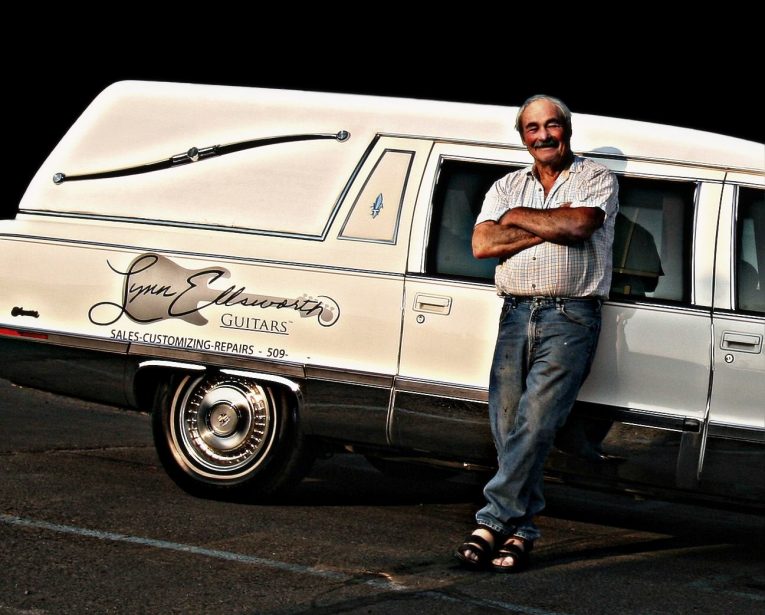 At a time when big-name guitar sales are reportedly on the downswing, there are handmade guitars that might be making up for some of the loss. Among those very special guitar makers is Lynn Ellsworth, a legendary luthier who has made guitars for many music greats over the years. Ellsworth made Eddie Van Halen’s iconic guitar, “Frankenstrat,” and guitars for Eric Clapton, Pete Townsend, Joe Walsh, and many more.

What motivated me to talk with Lynn is his reputation for making guitars with amazing, and I do mean amazing, tone. After watching a video of the guitarist, Max Watters play a guitar with tone I’d never heard before, I found out that his Strat was made by Lynn Ellsworth.

Lynn was kind enough to talk with me over the phone.

Martine: Can you tell me about the guitars you make?

Lynn: I was in a band with Wayne Charvel in college and we remained good friends ever since. I was making replicas of antique furniture back then up here in Tacoma. Wayne got in touch with me and asked me to make a guitar out of exotic wood. So, I did. I made two of them out of gorgeous one-piece rosewood, which you can’t get anymore. I sent them down to California and before you know it I was building guitars for Pete Townsend and John Kay from Steppenwolf and his lead guitar player, Bobby Cochran—all through Wayne Charvel. Then we started doing them for other people.

At the time, I called them “Boogie Bodies” because we were making just the bodies. I didn’t make the neck or the complete guitar back then. After a while people started asking me, why don’t you do the neck and make a completed guitar? So, we did. And we sold them under the name, “Boogie Bodies.”

Martine: How did you get to all these famous musicians?

Lynn: When they would come up here and do a concert, I found out that if you pull up to the gates in a hearse, they open the gates. They want to know what you’re doing with it. I’d find out in advance who the guitar tech was for the (famous) musician and ask for him, and then show him the guitar. The tech would get all excited about it and then he’d do the selling for me. He’d show the musician and say, “Look at this thing.”

What made Wayne’s and my guitars different from anybody else is that they were hollow, and were made of exotic woods, like quilted maple, rosewood, zebrawood, stuff like that.

A friend of mine, Floyd Rose, came up to me while I was showing a guitar to a band in Puyallup, WA, and said, “What would you say if I came out with a whammy bar that wouldn’t go out of tune?”

I said, “Buddy, you do that, you’ll be a millionaire.”

Floyd told me that he’d done it. And I’ll be darned if this guy didn’t have a whammy bar that would not go out of tune.

Lynn: I did. For the guys that wanted whammy bars I put Floyd Roses on them and then I was making templates for Floyd Rose because he couldn’t keep up with the production. But the main reason why “Boogie Bodies” were so involved was the exotic woods. We were the first guys to hot rod guitars, to put humbuckers on Strats and use exotic woods. That’s what made them different.

Martine: How about the guitars you’re making now?

Lynn: My guitars now are copies of the popular guitars and I make them out of 2000-year-old redwood from old barns and boat docks in Lake Pend Oreille, Idaho. I find the pieces that have the most knots in it, that have more character than the rest of them, and I buy them. And then I take them home and look them over for a long period and figure out what would look best. I use refigured red fir for the top and laminate that on top of the redwood.

The guitars now are half the weight of the regular guitars and the sustain and tone are unequaled. You take it up on stage and nothing will come close to it. Once you play one if you can’t hear the difference between that guitar and your guitar, you’re wasting your money.

What happens when you tap a regular guitar, no matter where you tap that guitar, it sounds the same, the tone is the same. You take my guitar and tap it and you get four or five tones out of it, different frequencies because its hollow. If you tap a guitar I made for you, there’s a bass note that the guitar body modifies, amplifies, if you will, the sound that the string is making. So, you could be playing ear-piercing highs and hit a bass note and you swear the bass player just hit the bass note.

Martine: They sure are beautiful and the tone I heard was insane. Is it just about tone or is there more to it?

Lynn: First of all, the weight. A Les Paul is very heavy. Mine are half the weight. The second thing is, when you plug it in and hit power, both the body and the neck are just vibrating like crazy. Because I don’t put finish on these guitars. I put bees wax on them to smooth them out. You don’t want to seal the wood pores because that’s where you’re getting the vibration.

Then the sustain, when you hit a note, it doesn’t want to go away. Well, that’s the Holy Grail for a guitar player—the sustain. When I show my guitars, I say, let the tone and playability be the judging factor. Forget about the name. Plug it in, close your eyes and tell me what you think. 99 percent say, “I can’t believe the tone that’s coming out of this guitar.” 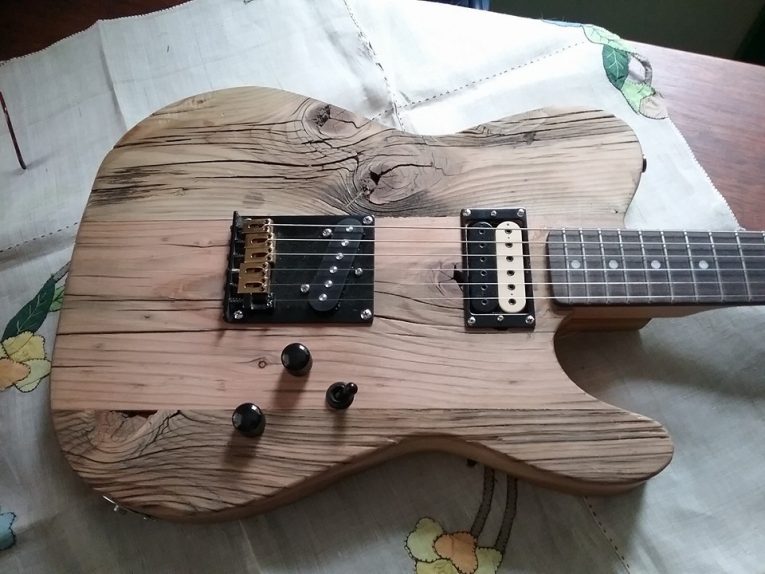 Lynn: Oh, it’s fun. We took one out to the best guitar player here in Spokane, his name is Bobby Patterson. He was playing his Les Paul and we took him a Strat copy that I had made. It weighed almost nothing. He didn’t hit 10 notes and got on the PA system and said, “This is the most badass guitar I’ve ever played in my life.” After the set, everybody in the band said, “Man, you got to get that guitar.” So, he got that one. That’s how we’re selling, by word of mouth. We just get them in the hands of the guitar players and I don’t have to do a thing. The guitars sell themselves. I get them in to the hands of people who are friends with musicians. I’m making prototypes right now to go out to Pearl Jam, Heart, Alice in Chains, and Steve Miller.

Martine: Who else have you made guitars for?

Martine: Maybe all you have to do is show up at concerts and hand the artists your guitars and let them play.

Lynn: I did that with Bruce Springsteen, believe it or not. The guitar was gorgeous. He wanted to buy it and I couldn’t sell it. He asked me if I’d make him a guitar exactly like it. I told him that I could make one like it but I couldn’t guarantee that it was going to sound exactly like it. Each piece of wood is a little different. They respond a little differently based on how they grew on the tree, the knots in them or the actual structure of the wood. He got pissed off. That’s been 30 years ago, I guess.

How I got one of my guitars to Eric Clapton is I drove up in my hearse and asked for his guitar tech. This was a gorgeous guitar, a zebra wood Strat. I only made 12 of them. I said to the guitar tech, “I’ve got a guitar here.” The tech said that Clapton wouldn’t be interested because he’s an endorser of Fender and they gave him all the guitars they want. I asked him if I could show him the guitar. 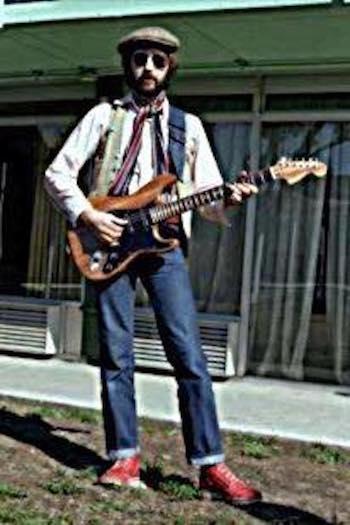 I opened the guitar case and the guitar tech said, “Eric Clapton is going to poop his pants when he sees this.”

I asked if I could stay around to show him. Later that day I did meet with Clapton. When he opened the case, he said, “That is the most gorgeous guitar I’ve ever seen.” It looked like what tiger eye looks like. Clapton asked me what I wanted for the guitar. I told him only what I got into it—a thousand dollars. He said it was way too cheap. He paid me for it and called me later to reshape the neck. So, I did.

Martine: Tell me why you make guitars. It can’t just be that you have a real gift for it. There must be something else.

Lynn: I’m into this. I’m definitely not doing it for the money. It’s worth everything to go up on stage and hand the musician a guitar, have him hit a few notes and see the grin on his face. You can tell immediately. And that to me is worth everything. It just sends goosebumps through my body when the guy lights up, and you get that tone and everybody in the band goes, “Holy Cow, that’s incredible.”

So, that’s why I do it. It’s for the love of building and helping somebody get a better tone, a better instrument.

You know how to make a small fortune in the music industry?

Lynn: Start with a big one. (Laughter)

Martine: That’s a great one. (Laughter)

Lynn: A lot of people know me here in Spokane, some guys don’t, and they say it’s the guy who drives the white Cadillac hearse. They may not remember my name but they remember the car.

Martine: So, you do it for the love of it.

Lynn: That’s for sure.

Lynn is no longer affiliated with Lynn Ellsworth Guitars LLC.