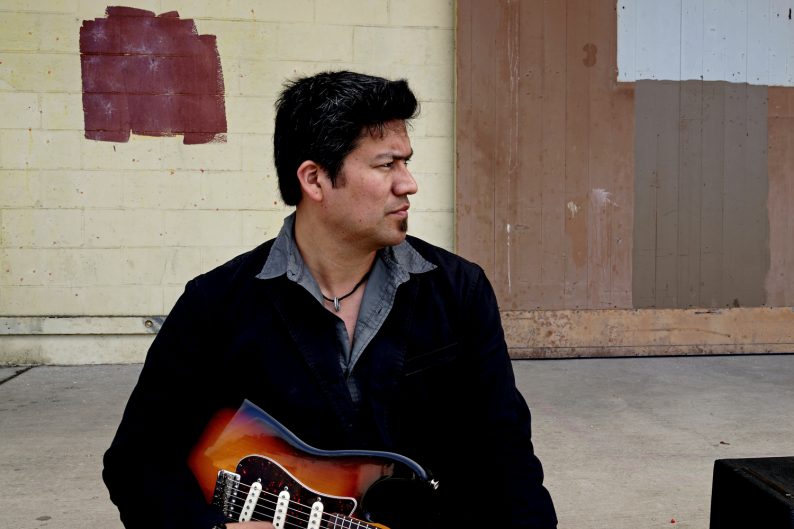 I interviewed Mato Nanji, frontman, guitarist, singer-songwriter for the blues-rock band, Indigenous, and member of the Experience Hendrix Tour for the last 15 years. I first noticed the superb guitarist, Nanji, at the Experience Hendrix concert in Los Angeles. His playing was outstanding and I wanted to find out more. Mato Nanji was kind enough to talk with me on the phone. He was just coming off an east coast tour with Indigenous when we spoke.

Mato: Yes, Chris Layton has been there since the start too. And Kenny Wayne Shepherd, Billy Cox, and I think Buddy Miles did a few of them. In the beginning, there were a lot of different artists that came and played. I think Santana did a couple.

Mato: Neal Schon from Journey, some of the guys from Pearl Jam, the guitar player, Mike McCready came and played and a couple from Alice in Chains. And the singer from Heart, she did some shows.

Martine: Wow. So many great musicians have joined you.

Mato: Yeah, it’s been really cool, awesome. Still is. It’s a blast to get up there and do it every time, you know?

Martine: I bet it is. Are you going to continue on with the Experience Hendrix Tour?

Martine: Oh, they’ll have you.

Martine:  What’s your favorite part about Experience Hendrix? Is it the other musicians, is it the music?

Mato: It’s definitely the music. Getting a chance to see everybody play is a really big part of it too, because everybody brings who they are to the music and it’s kind of cool to see the different versions and different takes on Jimi’s songs.

Martine: Oh, I’m sure. You’re also the front man, lead vocalist, guitarist and songwriter for your band, Indigenous. Can you tell me about your music with the band?

Mato:  It’s similar because Hendrix was a huge influence and it kind of started then, from Hendrix and Santana. I grew up listening to my mom and my dad’s record collection, all that rock music from the 60s and 70s and a lot of R&B. My mom had a lot of R&B records from Otis Redding and Sam Cooke.

Indigenous’ music is like a mix of all that. I try to get pieces from everything that I hear and kind of incorporate it into what I’m doing or writing because it’s really inspiring to hear all these great artists and musicians.

Martine: It was inspiring for me to listen to Indigenous. I watched some videos and I was stunned. Your music is so good.

Mato: Thank you. We appreciate it. We started out with my family band, my sister and two brothers and then we toured for about 10 years and then made a few albums together. We made it last as long as we could and then I just decided to keep going with the name and making records. I’ve been going ever since.

Martine: How did you put together a band at that point?

Mato: I just searched and then finally found some young guys from New Mexico that have been my main guys for the past five years or so. They were in their own band called the Plateros but they joined my band after that. They’re actually from the Navajo Nation down there. They’re young players, really great players.

Martine: Do you write all the music for Indigenous?

Mato: There were maybe a few songs that my brother and my sister wrote on some of the records and then we did a couple of cover songs here and there. We actually did a record with, I don’t know if you’ve heard of Doyle Bramhall, Sr.?

Martine: Yes, didn’t he produce one of your albums?

Mato: Yes, he was Stevie Ray’s main co-writer. They wrote a lot of songs together and he produced one of our records. When we first met him, we opened up for him back in like the late 90s. We stayed in touch and when the time came for somebody to produce one of our records I thought of him. He was always one of my favorites. He was actually Doyle Bramhall II’s dad.

Mato: We actually got Doyle II to play on some tracks too on one of our records. It was awesome.

Martine: The last Indigenous album was in 2014, right?

Martine: Do you have plans for another Indigenous album?

Mato: Yes, we just finished one and it will be out November 11th, 2017. It’s called, Gray Skies. We’re looking forward to getting it out there.

Martine: Tell me about Gray Skies. Is it blues-rock like the other albums?

Mato: Yeah, it’s a mix of that. It’s on the same record label as the last album.

Martine: Rock and Blues Muse followers would love to hear a little bit of it.

Mato: I think we’re planning on releasing a couple of tracks soon.

Martine: When I published my review of Experience Hendrix a few months ago, I’d mentioned you in the review.

Martine: A bunch of people jumped on that and said this guy is one of the best guitar players ever.

Martine: Did you write most of the music over the last few years with your wife? Is that what I read?

Mato: Yeah, ever since the first Indigenous record, we’ve been slowly writing some songs. It ended up working really well so we’ve been writing together ever since.

Martine: That must be a fun process.

Mato: It’s awesome because she’ll sometimes have a melody and some lyrics and she’ll be able to sing and then I get an idea and we put it down and then work it out. It works pretty good.

Martine: What’s ahead for Indigenous besides the new album? I see that you’re touring through November.

Mato: We’ll be kind of all over the place and as much as we’ve been touring, we haven’t had the chance to really get over to Europe. I think that might be one of the next steps. There’s a lot of fans, I mean, just from the few shows and festivals that we’ve done, and the fans over there loved it. We just did a festival in Germany, which was really awesome. I was surprised because there were a lot of fans there already that had our CDs and posters and pictures. We’re slowly reaching the rest of the world. It was cool to go over there for the first time and see fans.

Martine:  You’re going to be probably promoting the new album with a tour also, right?

Mato: As soon as we get that out we’ll be hitting the road again.

Mato: Well, actually, early on when we first toured we did shows with Bob Dylan, the Dave Matthews Band, Jackson Browne, Bonnie Raitt, and The Indigo Girls.  There’s a lot of different players we’ve played with and it’s been pretty awesome.

Martine: if you had a wish–I’m sure you have a guitar hero or two, who would you like to play with?

Mato: I’d want to tour probably with Santana, I guess that would be one of my dream tours. A lot of my dreams came true touring with BB and Buddy, you know? So, it would be hard to kind of choose, but I think Santana, he’s always been a big influence too.

Mato: Well, I’m not sure how much he’s been touring but maybe doing some more stuff with Buddy Guy, my band and Buddy Guy’s band would be awesome too, you know? I love the band, Los Lobos too. They’re one of my favorites. Anytime we get to work together is awesome.

Martine: I hear Hendrix and Stevie Ray Vaughan in your guitar playing but I’ve also read that your father, Greg Zephyr, was a big influence. Can you tell me about that?

Mato: Yeah, he was the biggest influence on me as a player overall. When I was really young, I found his guitars and amps and stuff in our basement and I didn’t even know he had a band or that he was a musician.

He said, once you learn by ear, you’ll never forget it. It’s been true ever since. He was probably the biggest influence on me as a player. My mom was also a huge influence. She was always so supportive, and she sang a lot too. They were both really supportive and really inspiring to keep moving forward and doing what we do.

Martine: You’re very fortunate you had that.

Martine: I noticed a theme about troubled times with American Indian and indigenous youth in your music over the years. Can you tell me a bit about that?

Mato: I think that’s just kind of how it is here growing up on a reservation. It’s actually still where I live in South Dakota, on the reservation. It’s just a smaller but different world. I touch on it a little bit in my music. I try to support a lot of the youths here that are maybe having a tough time. Whatever I can do to help. If they’re feeling bad one day and they hear one of my songs or something, I don’t know. I just keep trying to put it out there to help them along. Like youth everywhere, a lot of families get separated, and they end up without parents or something happens to their mother or father. It’s always tough. By me growing up and having a mother and father in my life, it helped me a lot so I feel like that sometimes gets lost on the reservation. So, I try to do anything I can. It probably isn’t much, but if it inspires or helps somebody to move forward and do good, then I feel like that’s what it’s all about, you know?

Mato: I just love making music and I feel like it’s more a part of who I am and all I knew growing up. I just want to spread it out there and send good vibes.

Martine: Cool. Let’s shift gears and talk a bit about your guitar. I’ve seen you play a Strat.

Mato: I have the one I use for the Hendrix tours, the one I’ve had ever since I first started. It’s a [Fender] 62 re-issue, Sunburst, with a rosewood neck and it’s all pretty much stock. The original neck that I had on there was kind of getting worn down and then Kenny Wayne Shepherd just mailed a new one to me out of the blue, kind of a surprise. He sent me a neck. It was pretty awesome so I put it on.

Martine: That is so nice.

Mato: Yeah, it was cool, awesome.

Martine: Do you have other guitars?

Mato: I have another Strat, a Mexican made Strat that’s really nice but now my son has been playing it. It’s become his guitar. I also have a Fender Jaguar that has P90s. That’s my backup guitar. I have a couple of acoustics, Martins. A 12 string and a 6 string. I mostly use acoustics when I’m in the studio.

Martine: I think I’ve taken up enough of your time today. It’s been a real pleasure talking with you. Thank you so much.

Mato: Thank you. Nice to talk to you.

For more information on Mato Nanji and Indigenous go to: