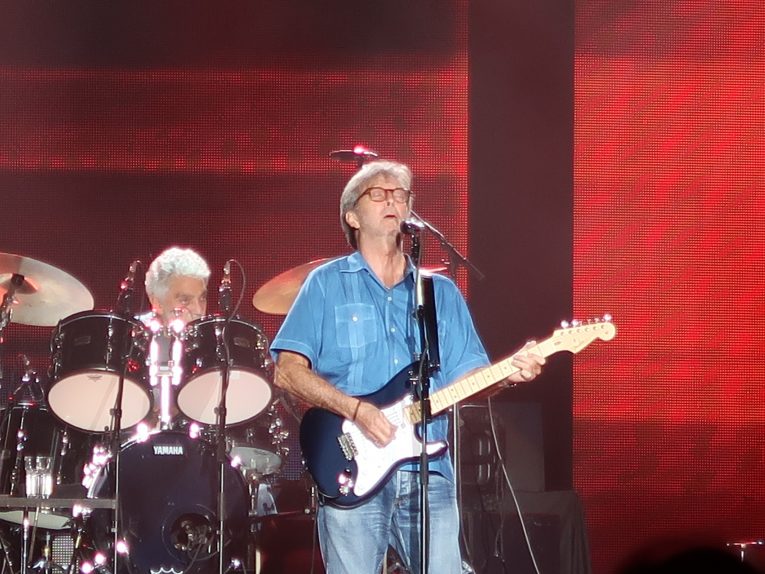 Eric Clapton, Gary Clark Jr., and Jimmie Vaughan created a musical feast for blues fans, in particular for guitarists and those who love them, on Monday, September 18, 2017, at the Los Angeles Forum.

To see Eric Clapton perform was, in a word, magnificent. And I’d seen him live before many years ago. A blues legend, who at age 72, performed four nights in L.A. Amazing? Oh, yes. A night to remember? Definitely. One of the best concerts I’ve ever seen? Without question.

Gary Clark Jr., a stunning talent, appeared on a stark, low-lit stage, almost still, as he launched into mind-bending solos and haunting songs from his Live North America 2016 album. Clark’s lyrics and melodies sometimes strike at the heart of the soul. Combined with raging rhythm guitar and solos with heavy distortion, Clark is one artist to watch. Talk about talent and a style all his own. His new single, “Come Together” by the Beatles, was the standout closing number before the master appeared.

And by the master, I mean, of course, the great Eric Clapton.

Some claim that Eric Clapton is a subdued performer. I see him as an artist who is less focused on putting on an act than he is on performing wonderful music. Watching Eric Clapton play is, among other things, to witness his interconnection with music. You can see it on his face—genuine relaxation into the music, instead of consciously putting on a performance. Isn’t that a true gift to be privy to that personal experience? I think it is.

Like Gary Clark Jr., Clapton appeared on stage with a brief “hello” to the audience, and didn’t say much. The crowd didn’t need him to talk because Clapton’s performance was all about the music, outstanding guitar playing, expert musicianship from the band, and songs most knew and loved.

Strat in hand, Clapton opened with, “Somebody’s Knockin’.” With two talented back up vocalists, the sound was rich, full-bodied. “I’m Your Hoochie Coochie Man” was the next crowd pleaser before the beloved, “I Shot The Sheriff.”

Now the entire crowd was singing along with Clapton and his band of stellar musicians. Back up vocalists, Sharon White and Sharlotte Gibson,  introduced a gospel feel to this tune and others.

Watching one of the greatest guitarists of all time, with his trademark tone, combined with the oh-so-recognizable riffs and solos, nearly knocked me off my feet. Close your eyes and listen to Clapton play a solo on, for example, “Stormy Monday.” You know it’s him. He’s a beautiful player, smooth, and soulful in his own way. Unlike anyone else.

By the time Clapton played, “Driftin’ Blues” I couldn’t help but wonder about the news of his medical condition, the rumor about this possibly being his last tour. Perhaps that enhanced the power of the concert for me. I kept thinking, “This is history.”

Clapton then downshifted into an acoustic set, complete with his Martin acoustic, Eric Clapton Signature model, of course. And I could see that signature on the fretboard because of the floor-to-ceiling video screens behind him with consistent close-ups on his hands playing that guitar.

“Nobody Knows You When You’re Down and Out” was next, a song I’d watched Clapton perform countless times on video over the last few years. No one does this tune like Clapton. His acoustic version of “Layla” followed, a lovely rendition of the hit song.

Chris Stainton’s piano solos were pieces of exquisite music in and of themselves. This guy is that good. Stainton traded solos with Clapton and the equally gifted, Walt Richmond, on Hammond organ. Bassist, Nathan East, is also in the gifted category but not just on bass but with vocals as well. Drummer, Steve Gadd, provided a beat and rhythm rivaled by few.

The acoustic set, performed by a seated Clapton and seated band, included, “Tears in Heaven,” a heartfelt nod of respect to his late son. It had a slight reggae feel this time around, and to see Clapton play this live (for a second time) still moved me. With it, came a mellow hue to the the evening.

An invigorating, “White Room” by Cream, blasted the start of the final electric set. Bassist, Nathan East, took on the Jack Bruce vocal parts and did the song justice. This tune introduced fiery energy once again into the show. The pace of the show was well orchestrated as the softer acoustic set didn’t loom over the breakout third act.

Clapton played and sang a very moving “Wonderful Tonight” and then launched into the rocking, “Cross Road Blues” by Robert Johnson. Clapton seemed to be really enjoying himself on this song.

A blistering “Cocaine” closed out the final set, with many people around me dancing, hands in the air. Gary Clark Jr. and Jimmie Vaughan joined the band for the encore, “Before You Accuse Me.”

An extraordinary night of live music it was. The venue was filled with awe and respect for a musician who has made an indelible mark on blues and rock history.