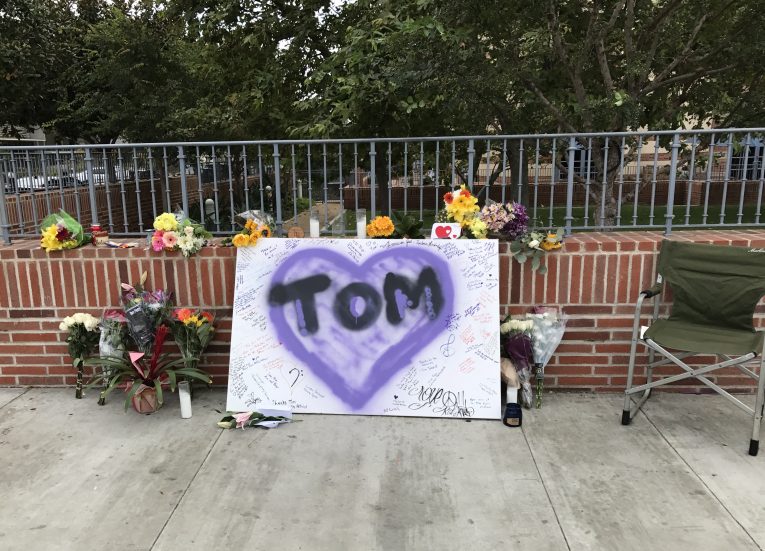 The above photo captures one memorial outside of the hospital in Santa Monica, CA where beloved rock legend, Tom Petty, died Monday, October 2nd, 2017. He will be terribly missed and fans are mourning across the globe. Chris Levick, tour publicist for Alligator Records, said to me this morning, “He was the soundtrack of my youth back in the late 70s. I have all my original vinyl and still wear my 1981 Damn The Torpedoes tour jersey. And the guy was still a vital, relevant artist whose fan base spanned generations (an amazing feat on its own). What an amazing legacy.”

In case you missed my write up on Tom Petty on the night his death was confirmed, please see link here.

Martine: Randi, please tell me about the Tom Petty concert you went to on Friday, September 22nd. I really wish I could have gone.

Randi: It was a great show. He looked happy and healthy and very much like he was enjoying himself on stage. He told us that the previous night he’d performed it had cost him a $5,000 penalty because he went over time! He said he just didn’t want to stop playing he was having such a good time.

Petty was very gracious on stage. After every single song he said, “Thank you very much!” I’d forgotten the string of hits he had and he played them all. He was so good as was his band. Everybody was singing along and he invited us to sing with him. There were a lot of young people in the audience, perhaps they’d discovered him in the 90’s. I’m sure glad I went.

Martine: What songs did he play?

Randi: “American Girl” Refugee” “Wild Flowers” “I Won’t Back Down” “Free Fallin’” “Crawling Back To You” “Runnin’ Down A Dream” He played all of them. He was so good. A couple of my favorite Tom Petty songs are “Learning to Fly” and Free Fallin’.”

Martine: How long have you been listening to Tom Petty?

Martine: What do you think makes Tom Petty so popular?

Randi: For me, he’s just good ol’ fashioned rock and roll. His music has blues, soul—all kinds of music influences. If you’d been at this concert, it was one big sing along.

Martine: Did anything surprise you at the concert?

Randi: He played tirelessly and continuously for about two hours. There was a lot of old footage of his journey out of Florida to California. I was really struck by the fact that he seemed to be enjoying himself so much and loving playing to his hometown crowd and playing his 40th tour to our audience. The guy next to me had flown in from NYC to see two Tom Petty concerts and he’d never been to L.A. before. He said that Tom Petty had done a two-hour set the night before.

Randi: Tom Petty looked really healthy and very together and was totally enjoying himself. It’s so sad. It’s a big loss in music. I’m very grateful that I got to see him.