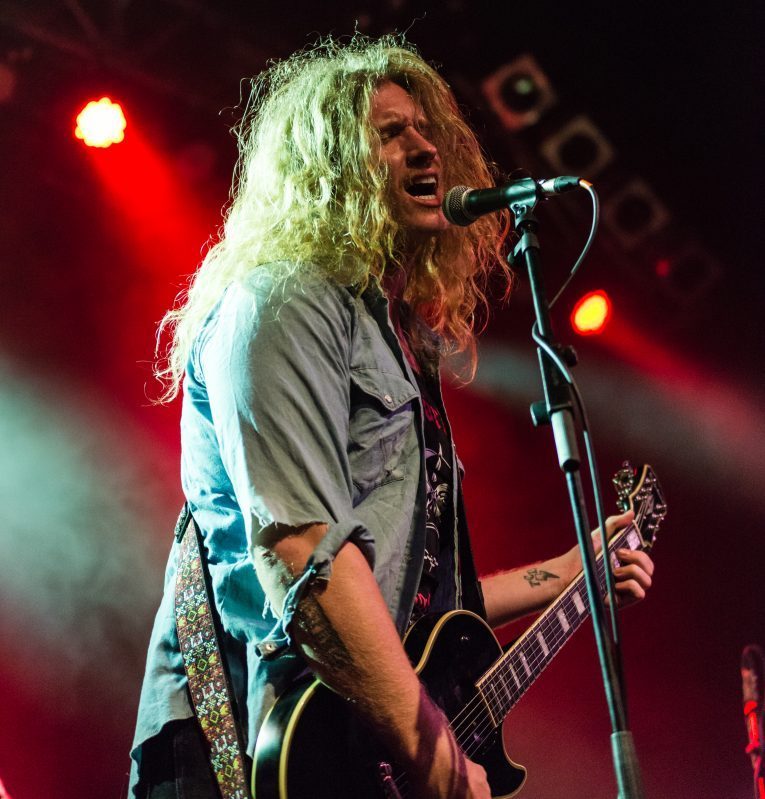 Heavy blues-rock guitarist, Jared James Nichols, has been touring as the opening act for hard rock legends, Saxon and UFO. He and his band appeared at Jergel’s Rhythm Grille when their tour hit Warrendale, PA on 10.11.17. Nichols is promoting his forthcoming second full-length album, Black Magic (due out 10.27.17 on Listenable Records) but on this night, he also drew from his first album, Old Glory and the Wild Revival and his debut EP, Live at the Viper Room. Although his material seemed to be unfamiliar to some of the people I spoke with from that night’s audience, his brief but intense set went over like red meat at a barbecue.

As Nichols strode onto the stage with his long mane of hair falling on the shoulders of his cut-off plaid shirt, he greeted the crowd with a wide, toothy smile. “Hey!” he boomed into to a slightly hot mic, which was quickly adjusted. He engaged in a bit of playful banter with the audience, introduced the first song and then he and his band (Erik Sandin, bass; Dennis Holm, drums) went into “Playin’ for Keeps,” a slow, stomping, psychedelic blues-rocker. Nichols wasted no time in displaying both his relentless attack and precise control on his favored single pick-up, Epiphone guitar, dubbed, “Old Glory.” As a vocalist, his voice had power and grit to equal his guitar playing.

Nichols is an incredibly skillful player, who has obviously spent a great deal of time studying, refining and innovating on the electric guitar. The result of his hard work is a mastery which allows him to effortlessly manipulate and coax an endless array of sounds from the guitar, not unlike another young guitar slinger from long ago – the trail-blazing Jeff Beck. Like Beck, Nichols favors a pick-less method of playing, which allows him to work the strings to achieve a variety of tones.

His bandmates possessed equal prowess on their respective instruments. Bassist, Erik Sandin plucked his strings so fervently that I could see them quivering above the fret board. Dennis Holm’s drumming was wild enough to be interesting but measured enough to be dead-on tempo. Together, this rhythm section was bedrock solid; the perfect answer to the demands of Jared James Nichols’ guitar playing.

Given a brief opening slot (roughly 45 minutes), Nichols wisely offered up some prime samples from his catalogue, including the intriguing “Don’t be Scared” from Black Magic (think of a Black Sabbath/Deep Purple/Kenny Wayne Shepherd collaboration. Yeah, right?) and the bluesy, soulful, up-tempo crowd pleaser, “Can You Feel It?” from Old Glory and the Wild Revival.

An interesting inclusion to the set was the band’s flawless cover of Ted Nugent’s, “Stranglehold.” Hearing them perform a 70s guitar-rock classic (I know that they’ve also been performing Mountain’s “Mississippi Queen” at some of their shows) drew a direct line to their obvious roots and influences. It was great to see them acknowledge that on stage.

At some point toward the end of Jared James Nichols’ performance, I set my notebook and camera aside and took a moment to watch him win over a room full of new fans. They may not have known who he was when he took the stage, but I’m pretty sure they’ll never forget him after he left.

For more information on Jared James Nichols and Black Magic: