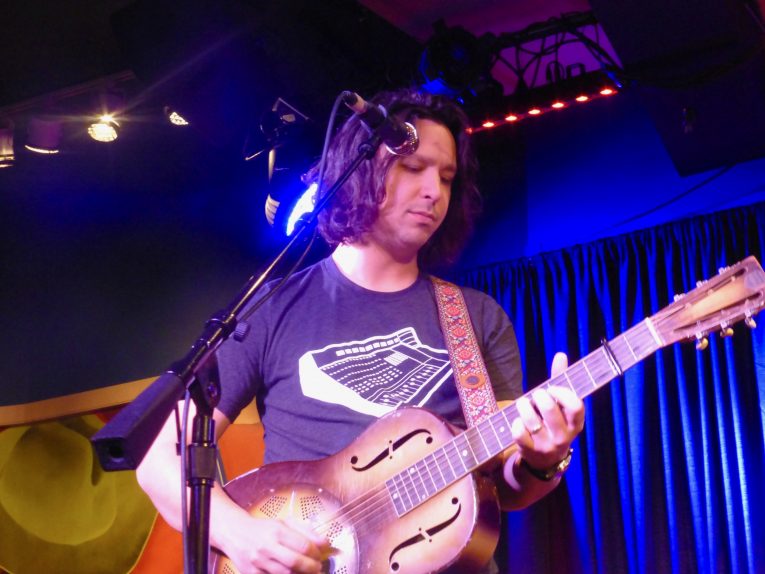 Davy Knowles stormed into Annapolis, Maryland, on November 8, 2017, playing before a packed house at the club, Rams Head on Stage. Not surprising, Knowles and his band, consisting of Michael Caskey on drums, Andrew Toombs on keyboards, and Marvin Little on bass, are a well-oiled machine. Knowles played for nearly two hours and drew from his entire catalog, including his time with the band, Back Door Slam, and threw in some choice covers for good measure.

After a short but very good set from the Jamie McLean Band, Davy Knowles and his band took the stage to a raucous ovation, the crowd clearly anticipating the fiery fret fireworks that were to come. Knowles did not make the crowd wait, jumping into “Catch the Moon” from his 2015 album, The Outsider, and played a solo on his classic 1966 Telecaster at lightning speed, inciting shouts of approval from the crowd. The intensity did not let up as Knowles jumped into “Government Row” from 2016’s Three Miles from Avalon, and “Riverbend,” the first of three straight songs from his days in Back Door Slam. Live, Knowles plays these three songs at a faster tempo than the studio versions and the band executed them with aplomb. Knowles then played the title track, “Coming Up for Air,” a swampy and funky song that featured a fine keyboard solo from Toombs, and a sustained wah-wah guitar solo from Knowles.

Knowles and his band are collectively pretty loose, quick to flash smiles and display their sense of humor. Knowles provided the background story to “Heavy on My Mind,” from Backdoor Slam’s Roll Away album, released in 2007. He explained to the audience that he’d stayed in his manager’s house, and the house was, in Knowles’ words, old and pretty spooky. At that moment, Toombs playfully played some eerie sounds from his piano, which Caskey supplemented with equally-eerie sounds from his drum kit.  Perhaps it was planned, perhaps not, but it elicited laughs from the crowd.

A fan, Natasha, video-taped this performance and gave us permission to use it. See the performance of  “As the Crow Flies.”


One of the many highlights of the evening was Davy Knowles’ solo performance of four acoustic songs, two of them from an acoustic blues EP he released earlier this year, 1932, using the 1932 National acoustic guitar that he bought on his very first U.S. tour about 10 years ago. Knowles has long proclaimed his admiration for the late, great Irish guitarist Rory Gallagher, and he played a stirring version of “As the Crow Flies,” originally written by Tony Joe White and covered by Gallagher on his Wheels Within Wheels album.  Knowles then performed a new song, “You Know, I Know,” that was stunning in its beauty.

After playing Greg Brown’s “Ships,” Knowles told the crowd that he recently got married to his long-time girlfriend, Amber, and said that his next song he would play is called “Amber’s Song.”  After a chorus of “awwww” from the crowd, Knowles flashed a devilish grin and exclaimed “it’s a break-up song!” Of course, Amber is lobbying for Knowles to write a love song for her, which Knowles claimed he will do when inspiration strikes, explaining with a mischievous smile, “You can’t rush these things.”

The band returned to the stage, and Knowles launched into two songs from Three Miles from Avalon, “Oxford, MS” and “Never Going be the Same.” The first features a sing-along chorus and hand claps, while the second has a funky beat and a slide guitar solo from Knowles. The band closed with a stirring version of the title track of Outsiders, a favorite of mine, with a heavy organ, a great sing-along chorus, and, of course, a strong guitar solo from Knowles.

The crowd was not going to let Davy Knowles off easy—they chanted and clapped for an encore, which he was only too happy to provide. The encore consisted of three great covers, with the first being Cream’s “Outside Woman Blues.” The band shined on this song, with Toombs playing a rollicking keyboard solo and Little performing a funky bass solo. Knowles invited guitarist, Jamie McLean, onto the stage, and the two traded vocals and solos on an impassioned version of the great Traffic song, “Dear Mr. Fantasy.” The concert ended with an explosive version of “Adam Raised the Cain,” with Knowles and the crowd screaming out the chorus and sending my Springsteen-loving girlfriend into orbit.

At the tender age of 30, Knowles is building an impressive catalog, with two solo records, an EP, and four Back Door Slam albums.  As good as that catalog is, Knowles is best experienced live—the passion of his vocals and guitar solos are displayed more prominently while his band has a chance to shine, both collectively and in playing solos. Given Knowles’ frequent touring, you will not likely wait long before he comes to your town, and if he does, don’t miss it. In the interim, check out Knowles’ “Official Bootleg” series on his website, a monthly collection of live recordings culled from Knowles’ performances.