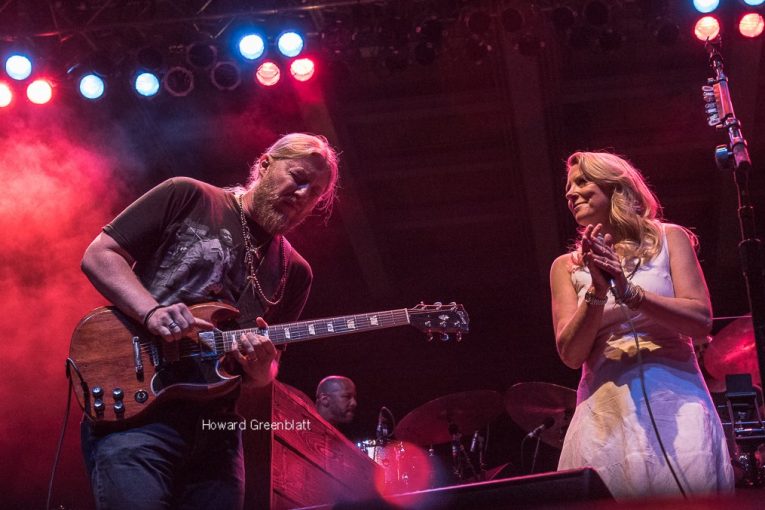 Jam band. The very words conjure up images of jean-clad stoners noodling on guitar, drum solos that go on forever, and an Americana-kissed sound that sometimes trucks but all too often dissolves into a miasma of psychedelica.

Then there’s the Tedeschi Trucks Band, technically a jam band but so much.

At its sold-out Saturday, Nov. 11 appearance at the Orpheum Theater in Los Angeles, the band showed, over the course of its two-hour-plus set, that real music played by real musicians can trump razzle-dazzle choreography, pyrotechnics and Auto-Tune any day.

This extraordinary 12-member ensemble moves fluidly from blues to gospel, from rock to jazz, from Indian raga to R & B, oftentimes within the same song. Take the fearlessness of the Grateful Dead, the muscular musicality of the Allman Brothers Band and the Southern soul of Delaney & Bonnie, filter it through the Susan Tedeschi’s impassioned vocals and Derek Trucks’ guitar wizardry, throw in one of the tightest bands this side of the West Coast Get Down, and you have Tedeschi Trucks.

Tedeschi, one of music’s singular vocalists, revealed herself to be the heart and soul the band.

In the gorgeous “Midnight in Harlem” from the group’s 2011 Grammy-winning debut, “Revelator,” Tedeschi mesmerized with her soothing vocals that floated over a bed of Trucks’ languid guitar and keyboardist, Kofi Burbridge’s sweet organ.

In “I Pity the Fool,” a Bobby “Blue” Bland cover, Tedeschi stamped her feet to wring every ounce of emotion from her guitar and husky voice. So overcome by the music was Tedeschi that she took off her axe mid-solo, a la Jimi Hendrix, and began jamming behind her back. The wowed crowd gave responded with a standing ovation.

Her husband, Trucks, didn’t say a thing the entire evening. He didn’t have to. His guitar expressed more than his words ever could. His solos rarely overstayed their welcome and served only to take the music higher. It was easy to see why “Rolling Stone” named him No. 16 on its list of “The 100 Greatest Guitarists of All Time.”

Trucks joined the legendary Allman Brothers at 20, played with the likes of Bob Dylan and Joe Walsh as a teenager, and won a Grammy Award in 2010 with his Derek Trucks Band. That peerless experience came through in his fluid and often stirring playing at the Orpheum.

One of the evening’s highlights was his gritty, aggressive soloing in the band’s “The Storm,” which also featured a tasty interlude by drummers/percussionists Tyler Greenwell and J.J. Johnson. Trucks, paying homage to his old band, then transitioned into an extended “Whipping Post” improv that conjured up the ghost of the late Duane Allman. Trucks passionate playing turned the Orpheum into a musical cathedral, bringing congregants to their feet.

Tedeschi and Trucks by no means created this transcendent evening alone. They generously and smartly shared the spotlight with everyone in the group.

A musical juggernaut, Tedeschi Trucks takes sounds in any and all directions, displaying the type of virtuosity that comes from spending 200 days on the road a year. The three-member horn section of saxophonist Kebbi Williams, trombonist Elizabeth Lea and trumpeter Ephraim Owens played with power, precision and passion. Williams’ funky sax solo during an incendiary “Don’t Know What It Means” proved a high point.

The evening ended with a loose version of “Let Me Get By,” the title song from the group’s most recent and strongest studio effort. As the band played, an eagle flashed on a screen. The eagle, which also appears on the “Let Me Get By” album cover, made for a fitting symbol: fierce, free and bold, just like the Tedeschi Trucks Band.