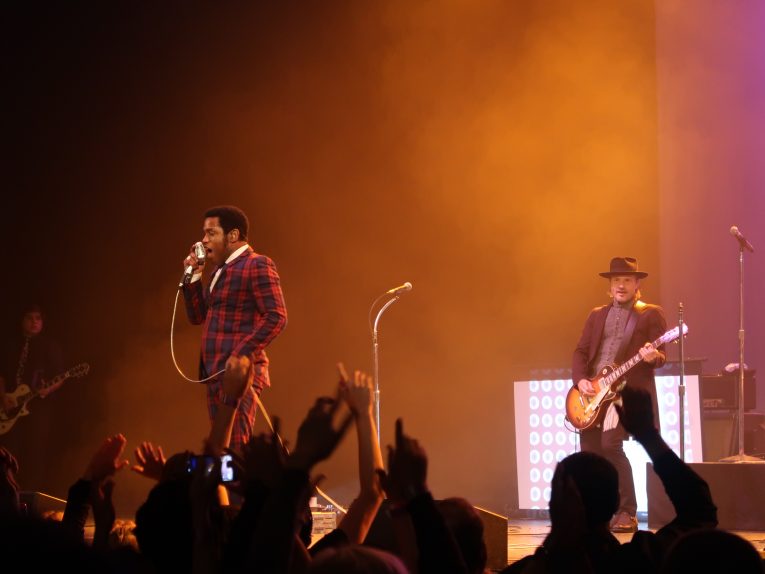 Have you ever gone to a concert, not knowing what to expect, and been so knocked out by it that you couldn’t believe you didn’t know about the band before the show?

This is exactly what happened when I saw Vintage Trouble at the Wiltern Theater, Los Angeles, Nov.15, 2017.

After a solid groove-based R&B set by opener Desi Valentine, Vintage Trouble took the Wiltern by storm. Lead singer, Ty Taylor was electrifying. An outstanding singer with monster control and serious dance moves, he and the members of Vintage Trouble transformed the venue into their own brand of rock and roll church.

A stellar show with 12 songs, and two for the encore, the stylishly dressed band, made up of Ty Taylor on vocals (and trombone) Nalle Colt on guitar, Rick Barrio Dill on bass and Richard Danielson on drums, wowed a packed house that night. Vintage Trouble’s music could be described as guitar powered rock with R&B flavors and hints of jazz and soul.

Produced by the legendary Don Was, and having opened for The Rolling Stones, The Who, AC/DC, Lenny Kravitz, and more, Vintage Trouble not only floored me with their show, but everyone else in the room with their unhinged form of sonic abandon.

I didn’t know one song the band played and yet I was riveted. Along with everyone else in the audience, I clapped when Ty Taylor beckoned us to. I gave high fives to people I didn’t know around me at his request. All eyes were on Ty Taylor with his dynamic voice, as he shimmied and shuffled, jumped and danced, strutted and spun around.

This was some rock and roll preacher.

There wasn’t one member of the audience who wasn’t along for the ride, dancing, clapping, and screaming for more. Talk about experienced entertainers with energy to burn.

I simply could not believe what I was seeing. Talent coming out of their pores, Vintage Trouble opened with “Strike Your Light.” Cracking drumming and slamming guitar riffs, this was soul-influenced, rock and roll at its absolute best. Front man Taylor, was yet to hit his stride.

“Blues Hand Me Down,” from their first album, The Bomb Shelter Sessions, was next and Ty Taylor and the band knocked it out of the park with their peak energy and Taylor’s stunning vocals. He strutted on stage, spun around, shuffled his feet, all the while hitting every note. A modern-day James Brown with glimmers of Prince, Taylor bend backwards to the floor, mic and stand in hand, while belting out this outstanding tune. Unbelievable.

By this time, the crowd was all in, on their feet and moving to the music. Outstanding slide guitar, thwacking tight drums, a bass player who regaled with one heck of a bass solo and a guest keyboard player who could really sing. The entire band jumped into the groove as they did for the hour and a half show.

“Doin’ What Your Doin’” was next and Taylor ran from the stage into the crowd standing in the pit and sang in the midst of people crammed in front of the stage, their hands tight with cell phones, high above their heads, videoing this stunning performance.

Later into the rock infused set, Taylor leapt into the crowd again and was carried by the audience (while singing full throttle) back to the stage. Singers and guitar players have done this type of thing before but never have I seen it with such genuine fun, love of the performance and the music. This wasn’t just theatrics—Vintage Trouble has the chops and musicianship to back it up. And it was authentic. I guess that’s the difference when you see a band that genuinely loves what they are doing and having a blast while doing it.

Desi Valentine joined the Taylor and the band on vocals for “Love Song to the World.” This was feel good music with groove. Both were in step with the beat, danced on stage and sang, “This is my love song to the world” and I believed them. I was not alone. Taylor incited the audience to sing along and most did.

It’s been a long time since I’ve witnessed such star power. Talk about charisma—Taylor and the band as a unit have “it.”

By the time they played, “Run Like the River” they had the entire audience on their feet, singing along. I wasn’t ready for them to quit. I could have been part of that energy, that great musicianship all evening. It was that good.

If you want a taste of their music, check out this video.

The first song of the encore was “Nancy Lee,” a rock and R&B tune, and Taylor and the band nailed it again. Grooving to the song, the entire band sang back up, and Taylor, like each song that night, sang it like he meant every word. With a little fancy footwork, he threw himself into as if it were the first time he’d ever sung it. Dragging the mic stand with him, it was as if he were singing directly to each of us in the audience.

“Not Alright By Me” closed out the show. Taylor asked the audience to sing “Ooooo oooo” for the intro. Our voices flushed the silence from the venue. Many sang the words right along with Taylor and he sang softly so our voices were the prominent sound.

If you have a chance to see Vintage Trouble live, I highly recommend it. You will not be disappointed.