Concert Review: Tommy Castro and The Painkillers, The Canyon Club 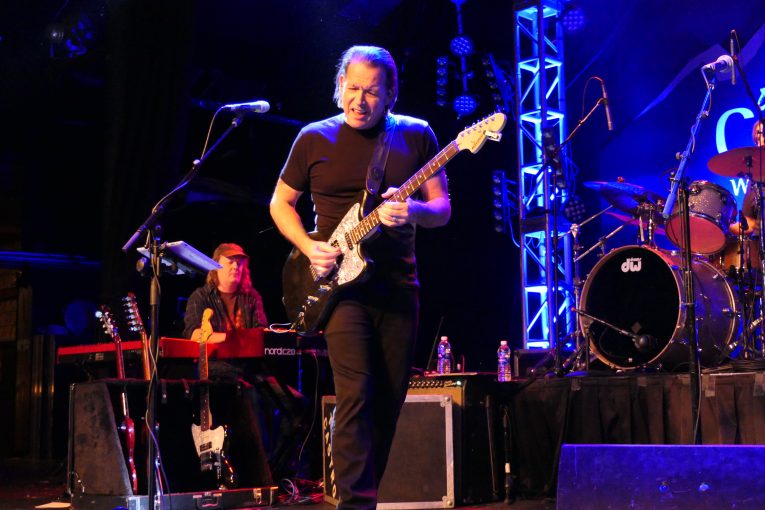 As many times as I’d heard that the blues-rock and soul band, Tommy Castro and The Painkillers, were outstanding live, I didn’t fully understand until Sunday night, January 14th, at The Canyon Club, Agoura Hills, CA.

Before the band appeared on stage, two people sat next to us and started talking up Tommy Castro and his band and the magic of their live performances. Another woman a couple of seats down joined in and said she had tickets to see a second show later in the week.

At 9pm sharp, Tommy Castro and The Painkillers appeared on stage and within a few minutes I understood what their devoted fans were talking about.

Castro has stage presence and some serious vocal and guitar chops. Clearly, he loves the music and performing, connecting to his bandmates, to his fans. There’s a reason Tommy Castro won The Blues Music Award for “B.B. King Entertainer of the Year.”

Tommy and the band opened the nearly two-hour set with a blues boogie tune, “Callin’ San Francisco” from their album, Right as Rain and then shook the house with “Love Is” from their latest record, Stompin’ Ground. The crowd went wild and many gravitated to the dance floor for the remainder of the set.

From foot-stompin’ tunes like “Enough is Enough” to great storytelling in “My Old Neighborhood,” Tommy Castro and The Painkillers rocked it. This is one tight band.

It wasn’t until I saw Tommy Castro play his signature “CastroCaster” that I realized what a great guitar player he really is. I’d listened to plenty of their music, even reviewed Stompin’ Ground, and I’d heard the soul and mastery in his hands. But not until I saw him perform did that talent come to life. The band includes top drawer musicians–Randy McDonald on bass, Mike Emerson on keys, and Bowen Brown on drums. Each offered side-splitting solos during the evening.


Castro and The Painkillers played a number of tunes from Stompin’ Ground and their other albums, and a few popular rock covers. And just to bring some soul and R&B into the mix, they played, “Them Changes” by Buddy Miles.

The show from beginning to end was charged with energy. Tommy Castro is versatile, singing scorching blues to soul-tinged R&B, blues-rock to rock. This is one musician with a lot of soul fueling passion for the music.

Castro and his band graced the last portion of the fast-paced evening with “Nonchalant” and “Common Ground,” both songs with meaningful lyrics and catchy melodies. We were on our feet as was the rest of the packed venue.

Before I knew it, the show was drawing to a close with “Blues All Around Me.”

What a show. This is a band that throws themselves into their performances. To see them live is to fully appreciate Tommy Castro and The Painkillers.

Tommy Castro and The Painkillers are currently on tour. See here http://tommycastro.com/upcoming-dates/