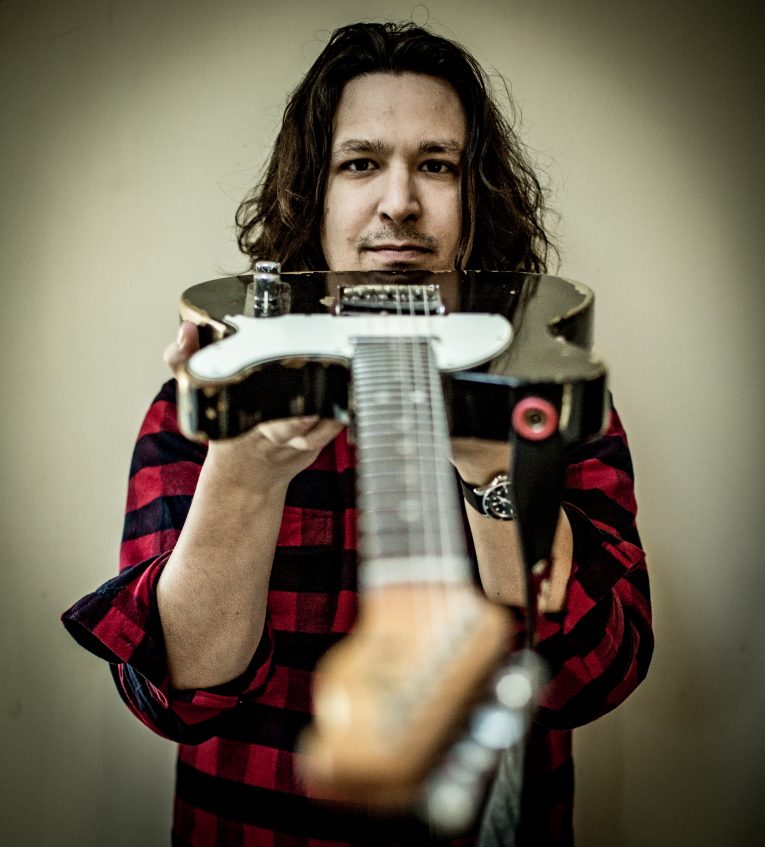 Fans of blues-rock music will likely remember Rory Gallagher, the Irish guitar virtuoso who started with the band, Taste in 1969 before turning solo in 1971. He released 14 studio and live albums until his untimely death in 1995. Gallagher was known for his marathon live shows, his go-for-broke guitar playing, his beloved sunburst Fender Stratocaster, his shunning of the limelight, and his working man stage attire. Gallagher’s legion of fans among his peers include the Edge of U2, Slash of Guns ‘n’ Roses, Johnny Marr of the Smiths, Glenn Tipton of Judas Priest, Gary Moore, and Joe Bonamassa. Eric Clapton credits Gallagher for getting him back into playing blues music, and the Rolling Stones recruited Gallagher to replace Mick Taylor when Taylor left the band.

Bassist Gerry McAvoy, who played on every one of Gallagher’s albums, put together the Band of Friends with drummer Ted McKenna, who played with Gallagher from 1978 to 1981, as a vehicle for keeping Gallagher’s music and memory alive. In Europe, the two played with Marcel Scherpenzeel and have been nominated repeatedly for Best Band for the European Blues Awards.

The Band of Friends will be touring the U.S. in April with Davy Knowles playing guitar and on vocals. Knowles has made no secret of his admiration of Gallagher’s music, and frequently plays Gallagher’s “As the Crow Flies” and “Million Miles Away” in his own live shows. Regular readers of Rock and Blues Muse know we are big fans of Davy Knowles—his passionate and fiery guitar playing and singing are something to behold, and we interviewed Knowles and reviewed his concert last year in Annapolis, Maryland. Knowles was kind enough to participate by phone in an interview.

DK:  The idea of Band of Friends is to highlight a musician who was incredibly under-rated and to have the opportunity to play with another pair of great musicians. It’s about celebrating Rory and his music, and for me personally, the influence he had on me, and to play music with other great musicians.

Years and years ago, Gerry was in a band called Nine Below Zero, and they played at the Isle of Man and they met my dad. My dad got Gerry to call me. He told Gerry that I was a massive Rory Gallagher fan and a musician. Gerry was sweet enough to call me. I’m not sure he remembers that. Years later, I did a live session on Facebook on Rory’s birthday, talking about how much he meant to me. I could hear the Celtic influence in Rory’s playing, and being Celtic myself from growing up on the Isle of Man, I could really relate to the Celtic sound in Rory’s playing. Gerry saw the video, liked it, and got in touch. He talked about Band of Friends and asked if I would be interested in playing with them when they toured the U.S., and of course, I said yes.

KP:  Did you ever think, listening to Rory Gallagher as a kid, that you would actually be playing his songs with his band?

DK:  (Laughs). No, of course not. You just try to learn and absorb it. But to be playing with the guys who played on Rory’s records is great. Even in rehearsals, we’ll play a little bit, and Gerry would say, “Rory and I used to play this,” and it is just amazing and stunning at the same time. You realize this guy (Gerry) was on all those records, and it’s a lovely thing.

KP:  When rehearsing, did you learn some new things about how Rory played?

DK:  Oh yeah, there’s a bunch of stuff. There’s the ending of “Tattoo’d Lady,” and there’s a guitar part at the end that’s so tricky. It doesn’t sound like the hardest thing he’s doing, and then you try to play it, and you’re thinking “bloody hell.” You have to step back and realize it’s not as natural to me as the guy who played it.

KP:  I’m sure it’s really amazing and daunting at the same time.

DK:  Yeah, but it’s a great opportunity to learn, isn’t it?  I did a similar thing with the Rhythm Devils when I played with Mickey Hart and Bill Kreutzmann of the Grateful Dead. The Grateful Dead catalog was something I never really explored, and suddenly, there’s a whole new world to be exposed to. Even though I’ve been listening to Rory’s music all my life, it’s a similar experience when you get into it and really start to play it.

DK:  It’s not note for note—I think that would defeat the purpose. The whole idea behind Rory Gallagher was this spontaneous ball of energy that wasn’t rehearsed to the nth degree and to honor that properly, you have to think along the same lines. It would be silly if I didn’t play a Stratocaster (laughs), but apart from that, I still want to be me as a guitar player and show how Rory influenced me and play these songs faithfully but make them ours as well.

KP:  What kind of stamp do you think you might put on these songs?

DK:  (Laughs). I don’t know. We put covers in our set, like “Almost Cut My Hair,” by Crosby Stills Nash and Young. I guess it’s the sum of all your influences—you’re supposed to be that and maybe something a little more. Obviously, Rory’s influence is reflected in my playing, and I’m really proud of that, but I also don’t want to slavishly copy anyone. I don’t think that is what Rory would have done.

KP:  Rory really was underrated and died way too young, but he really was influential.

DK:  Yeah, he impacted a lot of people, and he has fans from a wide variety of genres that is even more to his credit. Slash is a huge fan, as is Johnny Marr of the Smiths, and at first glance, it seems surprising but when you listen closely, you can hear how Rory influenced their playing. That’s what I loved about Rory in that he represented a broad canvas of playing. He kind of danced around a bit, and from a commercial perspective, maybe that didn’t work in Rory’s favor, but from a musical or artistic standpoint, his willingness to try different things is what made him exciting.

KP:  From what I’ve read about him, Rory struck me as someone who did not seek out the limelight.

DK:  I don’t know, I never met him, I never even saw him play. But from speaking to people who knew him, he was a very gentle person but also driven and highly intelligent who knew what he wanted. He’s always billed as an Irish blues guy, but he wasn’t just a blues player—he touched on so many things.

KP:  How does Gerry’s and Ted’s playing differ from other people you played with?

DK:  The first thing I noticed is Gerry brought out his P bass (Fender Precision) that was on so many of Rory’s records. I recognized it and totally wigged out (laughs). He plugged it into a small practice amp, and holy crap, there’s that sound. I knew immediately it was him. It was such a huge part of Rory’s sound, just this relentless driving sound, and just his tone is different from what is considered standard these days—it’s warmer, and there’s just a different quality to it. Ted’s drumming immediately struck me as how powerful it is, like a little engine. It is just fantastic.

KP:  You can really hear how pronounced Ted’s playing is in Rory’s records—it’s right there, not mixed down at all.

DK:  I think that is why Rory went back to a trio when Ted was in the band who could fill so much space, not with busyness but with power. He’s still got that in spades, it’s really amazing.

KP:  I’m impressed you’re taking a chance and dropping everything to do this.

DK:  I didn’t see this opportunity ever happening again. Musically, I love all sorts of stuff, and if you go back and listen to the first Back Door Slam record (Roll Away), there’s “Come Home,” which is obviously a blues thing, and “Outside Woman Blues,” but the title track is a Celtic ballad and there was a pop ballad, “Too Good for Me.”  We had a funky song called “Takes a Real Man.”  Even though the album was billed as a blues thing, there was a lot of varied stuff on there. Not to the same level as Rory (laughs). From a work ethic perspective, he wasn’t a pretentious guy—the shirt he wore at the gig was the same shirt he wore while driving to the gig. It wasn’t like he put on a suit and became Superman. He seemed like an ordinary working class guy who did his job and did it well, and I love that lack of pretension. I think that is something to be cherished and admired.

KP:  What kind of show can fans expect from Band of Friends?

DK:  The setlist is a really good mixture. It’s like what I do with my band, in that we learn a ton of songs and then decide on a setlist. It’s a really good mix of Rory’s career, which I’m excited about. Hopefully, the idea is to pay tribute to one of the finest musicians in the rock and blues world in the most respectful of ways, who hasn’t been paid tribute to enough. I don’t think there’s anyone better placed than Gerry and Ted to be doing that. It’s a real honor for me to be joining them.

KP:  I didn’t realize how many albums Rory put out. He was pretty prolific.

DK:  Yeah, and touring 250-300 days on the road. He was relentless. He guested on a lot of records, too. He was a guest artist on the Muddy Waters London sessions, recorded with Lonnie Donnegan, with some of the Yardbirds in Box of Frogs, with Peter Green. He was everywhere.

KP:  Do you think there will be a live album or DVD that comes from this tour?

DK:  I don’t know. That’s not really my call. I’m just happy to be on the shows, and anything after would be fabulous. I’m just concentrating on doing the shows as best as I can. We start on April 5th.

KP:  Do you have any plans for putting out some new music of your own?

DK:  Yes, definitely. As I’ve done in previous years, I’d like to put out a full album and an EP. We’ll start working on a full length album very shortly.

KP: Do you have material written and ready to go?

DK:  Well, yeah, in a way. Nothing like a bit of pressure to help grease the wheels. My strategy is just to write as much as I can and gather the ones that make sense together. But in this day and age, some people don’t even make records—they just record something and put it out on its own. But I still like to record songs that make sense collectively. We’ll be testing a few new songs out on the road with my band.

KP:  Davy, thanks for your time, and best of luck with the upcoming Band of Friends tour.

DK:  Thanks, always a pleasure.