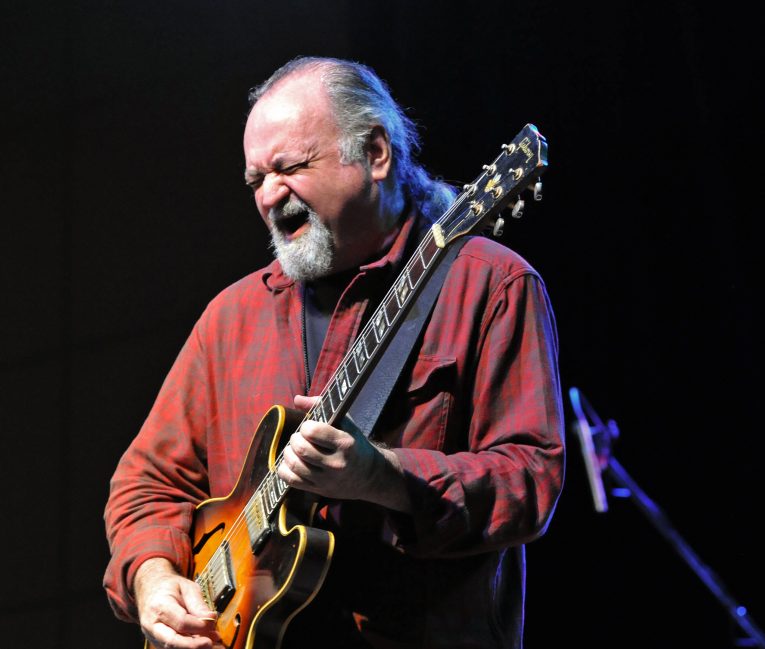 2018 is shaping up to be a good year for Tinsley Ellis. The veteran blues man’s new album, Winning Hand, was released in January and received rave reviews, including from Rock and Blues Muse, and has been a fixture on the Billboard Blues charts. He just finished his longest continuous tour in over 20 years, playing 65 shows from coast-to-coast. More shows are scheduled for later this year, including a co-headlining tour of the Eastern U.S. with Tommy Castro.

Winning Hand adds to Ellis’ impressive catalog. His albums are always good, if not great—he’s as consistent as they come. Although renowned for his blues-rock albums, Ellis has also recorded an instrumental album and a soul album for his own label, and did a tour playing Grateful Dead songs, known as Blues is Dead. Ellis was kind enough to talk to us by phone.

KP: Congratulations on the album, Winning Hand. I love it, our readers love it. Tell me how did the album come about?

TE: We’re real excited about Winning Hand. It came out on January 12th, making it one of the first blues albums of the year. That gave us a good head start, and we’ve been all over the country playing and promoting the record. We’ve done 62 shows coast to coast, from Palm Beach in Florida to Vancouver to San Diego to Maine. We have a few more shows in Texas.

KP: I looked at your tour schedule, and it’s quite impressive. I was exhausted just looking at it! 60 or so shows in 70 days!

TE: 65 shows in all. A couple of them were two-nighters, but 98% of them were one-nighters from city to city. Our friends at Alligator Records set up interviews for us everywhere, and that has really helped the album. It’s still hanging in there on the Billboard Blues Chart in the top 10 after almost three months.

KP: “Gambling Man” is where the title track comes from, right? “I won’t show my winning hand until the joker goes away.”

TE: That’s right. When I was trying to come up with a title for the album, I was reviewing all the lyrics, and I came across that line in “Gambling Man.” Winning hand has a double entendre with not only the winning hand in a card game but also the hand of a musician.

KP: Funny, I was thinking the hand of life, like having a winning hand.

TE: Another one, yeah.

KP: What comes first in writing a song for you—the music or the lyrics?

TE: Almost always, the music comes first and then I’ll write the lyrics to fit the mood of the song. With “Gambling Man,” it’s a slow minor key blues song so it will be kind of sad. For “Nothing but Fine,” that’s up-tempo so the lyrics will be more lighthearted.

KP: Tell me about “I Got Mine.” I understand that came from something Buddy Guy said.

TE: That’s right. A younger musician was asking Buddy Guy for advice on how to get ahead in music, and Buddy said, “I got mine, go out and get your own.” There’s no shortcuts in the music business, particularly in blues, that I know of. You have to go out and win fans one at a time. With blues music, you start out struggling and you outlast your competition—people either stop doing it or pass away, so it’s a career of attrition. You just whittle away at it, and now we travel all over the world with friends and fans in far away places. We’re very blessed and very grateful as well.

KP: You’re kind of the epitome of that—you’ve been doing this for 30 years now?

TE: I’ve been playing music for almost 50 years—I started playing in band when I was 10 years old.

KP: When did you start playing blues, and when did you figure you could make a living doing it?

TE: It just was a long process. I played in junior high school, high school and college and started making money doing it on the weekends. I was literally on the road a week after I went on to college. It’s what I always wanted to do so I was very fortunate, but it involved a lot of hard work. Show business is five percent inspiration and ninety five percent perspiration. I just worked really hard at it. There’s always been people better than me, like Stevie Ray Vaughn back then and Derek Trucks now, so I always felt that I had to work harder.

KP: I know you’ve played with Derek Trucks in the past. Do you have plans to collaborate with any other blues artists?

TE: I’ve collaborated with a lot of blues artists, like James Cotton, Bob Margolin and Mike Zito, and I look forward to collaborating with other people in the future. In the fall, I’ll be doing an East Coast tour with Tommy Castro, who is a good friend of mine. Hopefully, we can take that tour elsewhere, but it’s just the East Coast at the moment.

KP: How has your guitar playing evolved over time?

TE: I started out very much a copycat. I learned by playing along with Freddie King and Johnny Winter and people like that. When I started writing my own songs, though, I had to come up with my own style so I wouldn’t be copying anything, so I’d say the turning point was when I started doing original material.

KP: You’re known for your wah-wah playing. How did that come about?

TE: I got a wah-wah pedal in the 1970s, and they only had been used in music for a few years at the time, so that might be the one time I’ve gotten in on the ground floor (laughs). First wah-wah I remember hearing is Cream’s “White Room.” I got a wah-wah pedal shortly after that. Over time, I started incorporating into my albums. I started making albums in 1981, and I used a wah-wah on my first Alligator record. I was the first Alligator recording artist to use a wah-wah on a recording in 1988.

KP: You did a cover of a Leon Russell song, “Dixie Lullaby,” on Winning Hand. How did Leon Russell influence your songwriting?

TE: He didn’t just stick with the traditional one-four-five chord progressions; he put gospel changes in there and came up with a few changes of his own, like in “Hummingbird” and “Shoot Out on the Plantation.” “Delta Lady,” of course, was one of his big ones. I consider him to be one of the greatest American music talents of all time.

KP: I understand you don’t do a set list when you play live. How does that work?

TE: I don’t. I take five different guitars on the road—they’re all depicted on the inside of Winning Hand—and I do four or five songs on each of the guitars. Musicians see me pick up a guitar, they know which group of songs I’m going to do, and I just launch into them. There’s about five songs for each guitar.

KP: I know you did five albums in the past five years, covering different genres. Is your next album going to be in a different musical style than Winning Hand?

TE: I think I’m going to continue to rock, but down the line, there are albums that I would like to make. I did a live album back in 2005, and I did an all instrumental album in 2013. There are some other albums I would like to make, like an album of acoustic music, or an album of songs from artists who influenced me like B.B. King, Chuck Berry, Freddie King, Hank Ballard and the Midnighters. I also would like to do an album of duets. I’m kind of following the career path of people who made a lot of albums. B.B. King did these kinds of albums. There’s a lot of albums to be made, but I think the next one is going to continue to rock in the vein of Winning Handbecause people really like the guitar driven blues-rock.

KP: I would think having a solid, dependable fan base but not necessarily selling tons of records, gives you a little freedom in a weird sort of way.

TE: It does. I had one album that really sold a lot, and that was Storm Warningin 1994. There were a lot of factors that came into play that made that album popular, such as the recording debut of Derek Trucks. I also had Oliver Wood from the Wood Brothers, the great Americana band, and he was bringing songs to the table for me, like “Sell My Soul to the Devil for a Dime.” That album also had the original version of “Quitter Never Wins,” that Jonny Lang covered on his breakthrough album, Lie to Me, and Chuck Leavell played keyboards on the album. All the planets came into alignment for that album, and it was the only album of mine that sold well and was featured in Rolling Stone magazine. It would be nice to have another one of those albums again, but things like that just tend to happen.

KP: Thanks so much for taking the time to talk to us and best wishes to you for the future.

TE: It was my pleasure.

For more information on Tinsley Ellis: