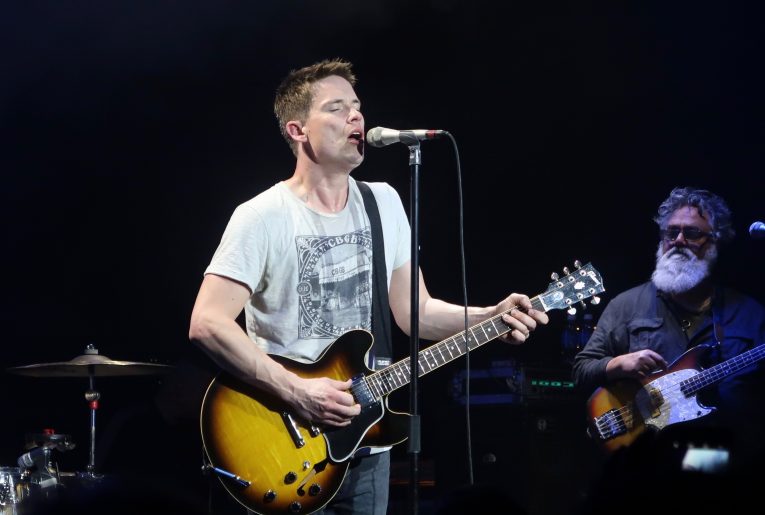 To listen to Jonny Lang’s music is one thing. To see him perform live is something else altogether. Jonny Lang came alive on stage at The Canyon in Santa Clarita, CA, on Sunday April 8th. It’s a show I won’t soon forget.

The club was jammed. His fans knew what they’d come for. I suspect I was one of the few who’d never seen him live as the pre-show conversation with those around us focused on a previous Jonny Lang concert only two months before. From blistering rock, to blues, gospel, and jazz, Lang’s music has groove, and it’s fun. It makes you want to move. Except for, of course, the blues scorchers and ballads that bring you to tears. The takeaway is outstanding musicianship and a virtuoso guitarist with plenty of soul.

Lang appeared on stage in a t-shirt and jeans, as if this were just another night. He greeted everyone in the room; the boy next door, friendly and humble, perhaps a bit shy at first, until he picked up his Gibson Les Paul guitar. When he started to play and sing, this ferocious, soulful voice emerged along with virtuoso guitar chops. All you could do was fall back against your chair, mouth open in disbelief. It’s the juxtaposition of the fresh-faced, unassuming guy and the musical beast he transformed into, that at first, was so stunning.

I don’t think I’ve ever seen an artist bring it like Jonny Lang. With every single song, he immersed himself into the music, a deep dive with each note. Vulnerable and formidable at the same time, he has a powerful stage presence. Perhaps that stems from a certain authenticity or maybe it’s just about giving himself over to the music in a way that few can.

Lang and his equally exceptional band, opened the show with “Freight Train,” a funky rocker with plenty of groove, from his album, Turn Around. The perfect tune to energize a room of devoted fans, and all eyes were on him.

With stripped down, soulful vocals not unlike a contemporary Joe Cocker, Lang launched into the title track on his album, Signs. It’s a dark, blues-rock number with meaningful lyrics about the state of the world, and a heavy, foot-stomping beat. The dirty guitar riffs cut to the core. Lang’s guitar solo, dissonant in places and in service to the meaning of this original tune, delivered a powerful whack.

Let me first mention Lang’s drummer—Barry Alexander killed it on this tune and on the others. Considering the rhythm of Lang’s music, he’d have to be some kind of drummer. And he is. This guy is superb, as were the other members of the band—Jim Anton on bass, Tyrus Sass on keys, and Zane Carney on guitar, who opened as a solo act for Lang with some impressive guitar playing and jazz/indie vocals.

Slowing things down a bit, perhaps to give us a breather after the first two power-punch numbers, Jonny Lang opened an emotional vein on the blues scorcher, “Quitter Never Wins,” originally by Tinsley Ellis. This tune could break your heart, especially the way Lang sings it. His guitar solo, played on his Telecaster Thinline, was in a word, extraordinary.

If there ever were a sales pitch for the joy and power of music, Jonny Lang is it. Especially when he plays guitar, his body writhes, twists and sways. It’s inspiring to witness a musician like this, one who doesn’t appear to resist any emotion a song calls for. He gives in, gives himself over to it, and that kind of authenticity is an infectious quality for an artist, one you don’t find very often, especially in combination with other-worldly talent on guitar.

After “Snakes,” another intense, rocking tune from the Signs album, the mood lightened with the Quincy Jones jazz tune, “Rack ‘Em Up.” Lang’s vocals simmered a bit on this tune and the beauty of his tone was controlled and clear. He gave room to his bass player to play a punchy solo before the keyboard player brought us all into the rhythm with a fun and stellar run on the Hammond B3. All smiles, Jonny Lang jammed with the band on this tune, right down to his vocal scatting while playing guitar.

The audience went wild, now on their feet in praise of Lang’s outstanding talent. With a broad smile, Jonny said to us, “We love sharing our music with people and we’re glad we get to share it with you guys tonight.”

“Red Light,” another heartbreaker about hitting the skids, kicked off with Lang soloing on his Tele. Before long, he launched into a gospel-esque refrain, complete with organ in the background. Lang’s vocals shined brightly on this one, a beacon for anyone who’d ever doubted they’d make it through the day. Beckoning the audience to join in on the chorus, we sang, “Everything is going to be alright.”

“Living for the City,” another highlight of the evening, rocked the house with a wonderful rendition of the Stevie Wonder song. Great rhythm with great musicians to pull it off. Lang’s guitar solo dazzled us all.

By now, everyone was out of their seats, fully committed to the ride. Lang played a call and answer on guitar with the keyboard player, adding to the fun of the evening. Truly a conversation between musical instruments. Call it innovation, ingenuity, musical genius—it all applies.

The crowd went crazy. As if they couldn’t get more involved in the performance, they whooped and hollered. When the song came to a close, Lang stepped to the mic, quietly shaking his head, and said, “You guys are just great. Thank you.”

After “Still Rainin’,” a thundering rock ballad from Lang’s Wander This World album, they closed the set with “Bring Me Back Home,” one of the most moving love songs I’ve heard.

As if to bring us back to the beginning of Jonny Lang’s career at age 15, he and the band performed “Lie To Me” for the encore. The album went platinum in 1997 before his record, Wander This World earned him a Grammy nomination. With three Grammy nominations and one Grammy Award win, Jonny Lang has toured with the Rolling Stones, Buddy Guy, BB King, Aerosmith, Jeff Beck, Sting and more. He appears regularly as part of the Experience Hendrix tour.

For more information on Jonny Lang: