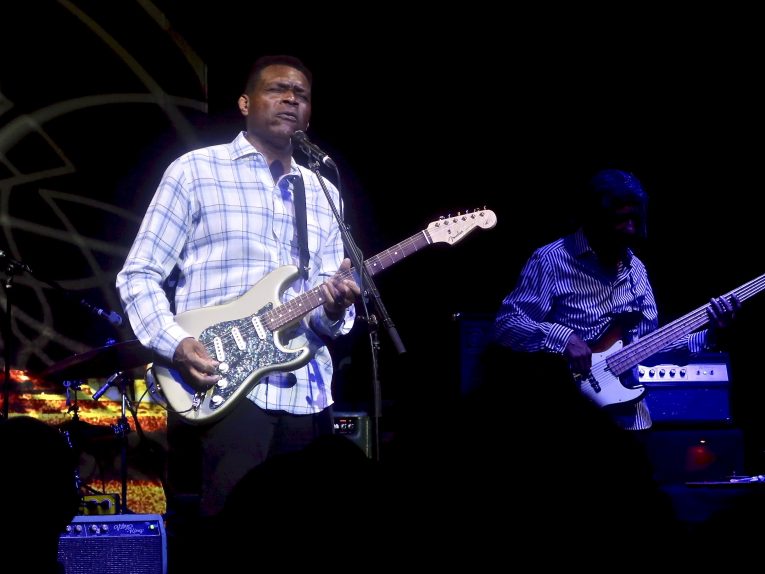 The lights had dimmed. We were ushered to our seats at The Canyon Club in Santa Clarita, CA on April 22nd  just as Shawn Jones was announced. Only two days ago, a friend had praised Jones and suggested I listen to his music. And there he was, totally unexpected, opening for Robert Cray. Guitar in hand, Jones stepped to the mic and greeted the audience with a warm smile. I didn’t know anything about him, but it was clear he was in his element, comfortable on stage, excited to perform.

Shawn Jones and his trio of fine musicians, kicked off the evening with up-tempo rootsy blues and rock & roll. “Yesterday’s News,” a rhythmic blues number, showcased Jones’ outstanding vocals and guitar chops. Such beautiful tone in both his vocals and on guitar. What a singer and player. We’d arrived to see Robert Cray, but this musician charged in with real blues and exquisite musicianship. You might not call it by seeing him, as the clean-cut appearance belies the depth of this musician’s skills and soulfulness. Three songs in, “‘69 Coupe DeVille,” a funky blues tune with some swamp, ramped up the groove. For his six-song set, Jones entertained us with bluesy, rockin’ tunes and I might add, a rare ’85 Guild Starfire to die for.

I later learned that Jones played with B.B. King, Waylon Jennings, Bonnie Raitt, Buddy Guy, Derek Trucks, Robben Ford, Joe Bonamassa and more.  With five studio albums and one live album, he tours the world with Robert Cray. If you get a chance to see him, I highly recommend it. What a delightful surprise.

I’ve seen Robert Cray perform live before. But to witness a legend like him again, is just as exciting, just as awe-inspiring. This guy is part of blues history. I was not alone, as the crowd whooped and hollered for the five-time Grammy Award-winner as he entered the stage. And he was casual, humble, mild mannered and calm.

Until he picked up his guitar.

To watch one of the greatest blues guitarists of all time, is magic. It just is. With more than 20 albums to his name, Robert Cray played with the blues greats, BB King, Stevie Ray Vaughan, Eric Clapton, John Lee Hooker, Bonnie Raitt, and more. From his voice, the way he plays guitar, the songs he writes and chooses to perform, you can tell that he not only sings the blues but has lived them.

When Cray grabbed his Fender Strat, fingers finding their way on the strings, he leaned his head toward the mic to sing and something else took over. That’s what happens with true masters—they merge with their music– they’re in it, at one with their instruments. That’s the great, Robert Cray.

If you were to close your eyes and listen to five guitarists, you’d be able to pick out Robert Cray in a millisecond. He has his own, completely unique guitar tone and sound. Same for his vocals too. Cray is one helluva singer with insane vocal range. At age 64, his voice sounds better than ever.

Jump-starting his set with the beloved, “Chicken in the Kitchen” from his 2009 album, This Time, old-school blues energized the crowd. We knew we were in for a great night. Maybe it’s the way he performs it, with a wry sense of humor, but the song is actually funny and clever, an original by Cray.

There’s nothing like watching a seasoned pro perform with a band that’s been with him forever. Outstanding musicians in their own right, Dover Weinberg on keys, Richard Cousins on bass, and Terence Clarke on drums, all synced with Cray like a firm handshake.

With passionate yet controlled guitar chops and pristine tone and feel, Cray launched into a Bill Withers tune, “The Same Love That Made Me Laugh,” from Cray’s latest album, Robert Cray & Hi Rhythm. Cray warned us that the songs on the setlist weren’t exactly happy. Maybe that was his dry humor again but there were plenty of up-tempo, uplifting tunes along with the blues scorchers.

“Fix This” served up more blues as Cray channeled other-worldly guitar riffs on yet another Fender Strat.

And then, as if to ease up the heartbreak a few songs in, Cray said to us, “Let’s get fu-u-u-nky. I mean low down funky.” “You Must Believe in Yourself” is a rocker with plenty of groove and soul. Cray opened up on a ripping solo with conscious room for space between the notes. Not a big mover on stage, he let go on this tune.

The crowd let loose with shout-outs to Robert Cray and rewarded him and the band with a standing ovation. We were witnessing one of the masters and we knew it.

Another up-tempo crowd-pleaser, “Bouncin’ Back” rode shotgun on the high energy in that room. It’s an R&B, soul tune about bouncing back after a break up and moving on. Weinberg on the B3, played one jaw-dropping organ solo.

Robert Cray’s deadpan humor surfaced again during the evening. “Just How Low” from his latest album, is a poignant and humorous political tune, another original.

The crowd was glued to Robert Cray. They were devout fans, many who I guessed had followed him for decades. During a tender and truly beautiful guitar solo, one guy from the audience, and not the first that night, shouted out to Cray in praise, “F*** Yeah!”

No one was ready for Robert Cray and the band to finish their set. As they headed back stage, people rose from their chairs and screamed for him to return. He did, thanking the audience, and played, “The Forecast (Calls for Pain, ) a rolling, rhythmic rocker with organ fills throughout. Once again, great rhythm, stellar vocals and a guitar solo with that Cray trademark twang.

Robert Cray, humble and gracious throughout the entire evening, is a master guitarist and stunning vocalist who has the ability to channel emotion through his music to reel you back to your own times of heartbreak. “Time Makes Two,” the final cut for the evening, is one such mournful song. As many times as I can imagine that he has performed that tune, Cray brought heart and presence to it and wowed us all.

For more information on Robert Cray: