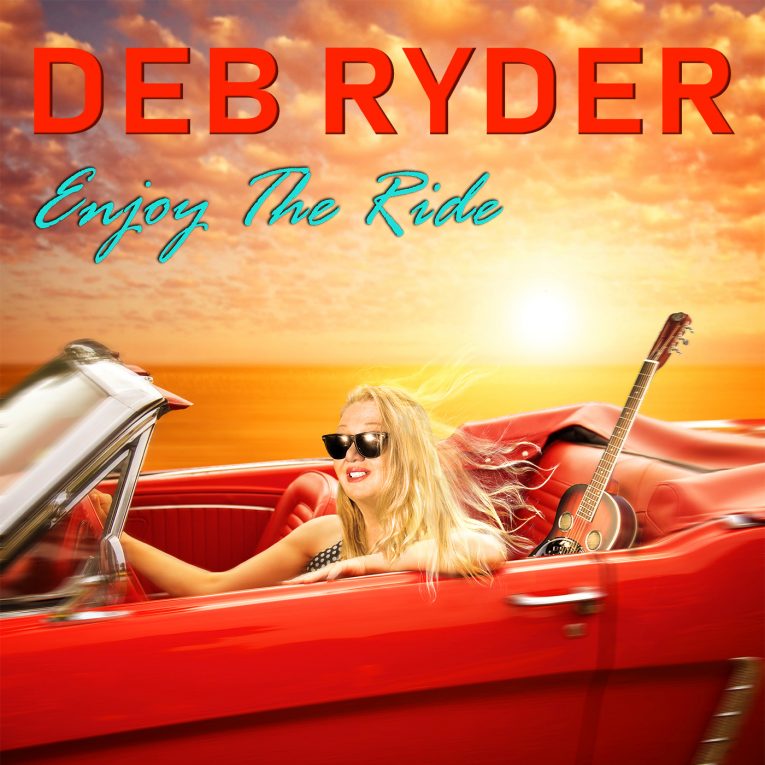 Deb Ryder has been immersed in music throughout her entire life. She grew up in her step-father’s music club, the famed Topanga Corral, outside of L.A. It was there she was exposed to and learned from musicians like Etta James and Neil Young. From there, she went on to a career doing recording session work and on-stage background singing, as well as performing with her husband, bassist Ric Ryder in their band The Bluesryders. Deb stepped out as a solo blues artist in 2013. With three albums behind her since then, Enjoy the Ride builds on the success she’s amassed over the past five years.

Opening with the slow and gritty blues of “A Storm’s Coming,” Ryder uses her powerful, sexy growl to warn us, “Because a storm’s comin’ – get your head out of the sand; If you can’t ride the whirlwind – you better get out while you can.” Joining Ryder on this track is left-handed Stratocaster-blaster Coco Montoya (noted solo artist and former member of John Mayall’s Bluesbreakers) playing lead, and Texas-based guitarist Johnny Lee Schell (Bonnie Raitt, Eric Burden) playing the core riff. The track works well to establish both the old-school feel and the contemporary tone of the album.

Producer Tony Braunagel, who plays drums throughout the album, kicks off the upbeat, horn-punctuated shuffle of “Temporary Insanity.” Ryder does an entertaining and convincing job of implying that she must be crazy to love her man the way she does. It’s done through her phrasing and inflection, which sounds natural and sincere, right through to her exasperated sigh at the end. Guests on this track include Dutch blues harpist Pieter “Big Pete” Van Der Pluijm (featured throughout the album) and guitarists Johnny Lee Schell and Kirk Fletcher (solo artist, Fabulous Thunderbirds) trading solos.

“Bring the Walls Down” is an impressive ‘rock n’ soul’ tune that sounds like something from the Stax Records catalogue. Ryder starts off in a lower register, reminiscent of Mavis Staples and then quickly lifts her voice to the heavens when she gets to the chorus, where she’s joined by spirited backing vocals, rich horns, and dramatically swelling keyboards, played by Mike Finnigan (Jimi Hendrix, Joe Cocker). The brief, jazzy spoken word section, written by Van G. Garrett and performed by Big Llou Johnson lends an extra air of sophistication to this already classy composition.

There are several text-book-definition-grooves to be found throughout Enjoy the Ride. “Nothin’ to Lose” has a classic, chugging locomotive cadence. “What You Want from Me” shifts back and forth between a familiar ‘Bo Diddley beat’ and a sinfully good gospel stomp, where Ric Ryder’s bass lines and Braunagel’s drum beats mesh seamlessly to allow Finnigan’s keyboard solo to come in and steal the show. On “Sweet, Sweet Love” the ensemble lays down a lovely New Orleans walk-about shuffle. Deb Ryder owns all these genres, her vocals always out front and in charge.

The title track, “Enjoy the Ride” lays some funky groundwork for Ryder to work her sultry, siren magic. Especially nice are her slightly subdued, effects-tinged vocals during the bridge before the keyboard solo. This song should prove to be a highlight during live shows as they tour to promote this album.

On an album full of fine vocal performances, “Forever Yours” stands out as Ryder’s most breathtaking moment. The instrumentation is spare, allowing the singer to relax and explore different vocalizations. Ryder hums, croons, soars and dips with a commanding passion and complete control.

These days, Deb Ryder no longer stands on the side of the stage – she stands at the center of it. There’s no looking back and she’s ready to Enjoy the Ride.

For more information on Enjoy The Ride by Deb Ryder: