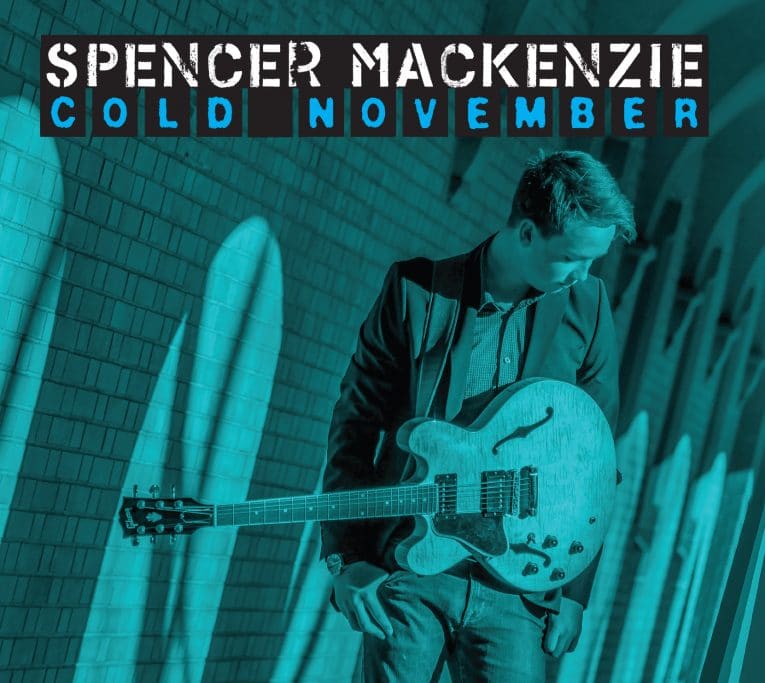 Young Canadian blues phenom and multiple blues award-winner, Spencer Mackenzie, released his new album, Cold November on June 1st, 2018, via Fontana North. If The Blues is going to survive (spoiler: it will) it doesn’t just need young players who can emulate the sounds, themes and structures, it needs those players to eventually take charge, make the music their own and help evolve the genre into whatever it will become next. It’ll be “kids” like Spencer who’ll be doing a lot the heavy lifting in the years & decades to come. Cold November is a crisp and professional document in the early stages of a sure-to-be important and influential Mackenzie career timeline. He has already won “Artist of the Year” by the Maple Blues Awards and others.

In “Fine Place to Start” the first sounds you hear are Spencer’s scuttle-buttin’ intro lick and the low growl of a ready-to-go horn section. The solid playing, along with a confident voice that is still exploring its range, combine to let any blues fan know you’ll be listening straight through to the closing track. The tone switches  on “Move on Down the Track” which starts off as a basic 4-on-the-floor dirty blues workout until all the instruments drop out for a vocal break that then tees off a driving railroad beat for this classic-feeling train song. Pretty sophisticated song craft for such a young musician. On “Shut the Door (Baby don’t look back)” Mackenzie channels the smooth feel of obvious influence Robert Cray and even a touch of BB King. This is the kind of song that doesn’t try to impress you, which is why it does.

Title track “Cold November” is, I have to say, jaw-dropping in its maturity. The guitar work is as smooth, emotive and controlled as we’ve already come to expect from SM, but it is the subject matter that sets this song apart; a commentary on the senseless November 2015 attack in Paris. His clean bell-tone vocals soar and swoop heartbreakingly over the moody, rain-soaked music. Listening to it is a reminder that, if the world is going to be saved, his is the generation that just might pull it off. Smartly, he follows such a stunning song by keeping the beat slow but brightening the vibe a bit on “Voices Echoing” which explores the Stevie Wonder-esque funky slow-groove side of the blues. The funk knob gets turned up even higher on “Haunt Me” with a solid assist from Miles Evans’ Hammond organ. This tasty hoodoo of a song has a long and subtle lead break and a few chuckle-inducing lyrics: always interesting when someone too young to buy a beer (even in Canada!) wails “…alcohol can’t help me at all.”

Some more surprisingly sophisticated lyrical ideas bubble through “Your Mama’s Crying.” On this track he is letting himself be brave enough to draw from a deeper emotional well than many of the 40+ year old blues dudes I’ve heard over the years. There is also room in this song for tasty piano sections and an emotionally effective  guitar break. The light-hearted swing-vibe comes back on “She Don’t Care” with its city-fied horns and finger snapping beat. Mackenzie indulges his inner crooner on this tune that eventually opens up to an extended jazzy instrumental break and a glimpse at yet another fretboard skillset this 18 year-old already seems to have locked in.

The album closes with two covers that illustrate the two sides of SM’s coin. On his take of the Robert Cray’s “You Move Me” we hear every angle of that refined and restrained style (click back and re-listen to “Shut the door” and you’ll hear exactly what I mean.) The album closes with a raw, stomping gallop through Gary Clark Jr’s “Next Door Neighbor Blues” where you’ll hear his gritty guitar stylings along with some wide-open rhythm slide-work.


This collection impresses me from start to finish. The only tiny missteps, as mentioned, might be a couple of lyrics that don’t ring quite true for an 18 year old. Those moments are far outweighed by so many of the refined and downright worldly lyrical ideas found in nearly every song which, when combined with his smooth and surprisingly seasoned guitar playing, earns Mackenzie every accolade and award he has already received in his still-incredibly-young career.

Most interesting to me will be the development of his vocals. Some vocal lines in this collection go in directions unexpected by blues ears; going high when most would go low or fluttering up to high notes more associated with boy bands and pop singers than blues howlers. These unexpected twists and turns in the vocals are part of the authenticity of his voice. If he was trying to sound like a grizzled whiskey-gargling  blues survivor, it would ring false. The point of the Blues is being honest about where you are at, in life and in everything else. At eighteen, Spenser Mackenzie has a few things that older blues veterans can’t speak to and those are his strengths at this point–his youthful hope with an eye toward the future… and he’ll be the one taking the blues there with him. Believe it.

For more information on Cold November by Spencer Mackenzie: