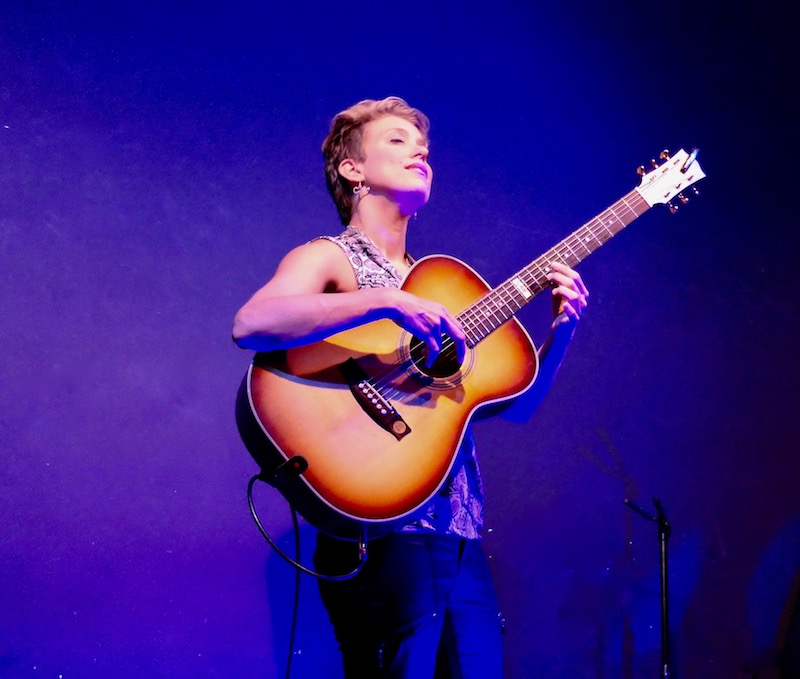 And what a show it was.

Acoustic guitars lined the walls of the venue. This was a gig that drew many guitar players but we witnessed a multi-talented artist who offered a great deal more. Lenée dazzled the audience with her fingerstyle techniques, percussive playing and harmonics, but also with her soulful vocals and gift for storytelling. Using several different guitar tunings, Lenée created a show that was both uplifting and impressive. Her music has been compared to Michael Hedges, Joni Mitchell and Dave Mathews.

Christie Lenée is not just a virtuoso guitar player who incorporates outstanding fingerstyle, two-hand tapping, harmonics, and percussive techniques to her playing–she is a one-woman-band. Dressed in leather pants and motorcycle boots and armed with a Martin 12-string and Maton 6-string guitar, Lenée created the effect of a band, a trio if you will, complete with bass drum, foot tambourine, looper pedal, and harmonies. She also used a vocal harmonizer that allowed her to trigger two, three and four-part harmonies. That might sound like a lot to manage, but this musician had it down. Lenée is the real deal.

Opening the show with an all instrumental tune, “Ivory Coast/Chasing Infinity” showcased her otherworldly guitar skills, beautiful melodies and harmonics. This first tune established her right away as the virtuoso guitarist that she is, but one with soul, with inspiration.

Before launching into Joni Mitchell’s “Big Yellow Taxi” Lenée shared how she came to this tune, a story that included her mother and a nod to the state of California. Anyone who attempts a Joni Mitchell song had better have the vocal chops and Lenée certainly did. She she brought this audience to its feet.

A few songs in, Lenée asked the crowd to sing along, handing us the vocal parts while she sang the main melody. The result was nearly as moving as the rest of her show, a product of a musician who clearly loves her music and the audiences for which she performs.

Perched forward with her right foot on the stomp box pedal, I glanced at her feet, tapping not in unison, but independently, her left with a foot tambourine, the right on a stomp box which sounded like a bass drum. Lenée launched into her tune “Ivory Coast” off her album, Chasing Infinity, the song that won her the International Fingerstyle Guitar Competition. Excitement and passion in her performance, this was a stunning song with both of Lenee’s hands working the fretboard at the same time to create beautiful harmonics. 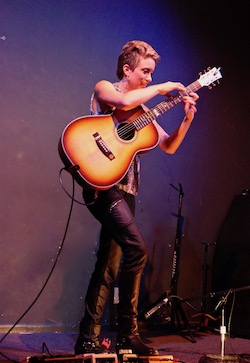 Lenée described the next tune, “Home” as a tribute to her home in Tampa FL. It was obvious by the joy on her face that she loved what she was doing. Lenée is a true professional. No smoke and mirrors. With more harmonics and masterful guitar playing, she sang beautifully while tapping and creating different sounds on the guitar, not unlike the great, Tommy Emmanuel.

Before the title track on her latest album, Stay, Lenée explained that this song was dedicated to a dear friend and musical partner who took his own life. As if in a living room with close friends, she shared that she had written the song to inspire and comfort those in moments of challenge and darkness.

After a few words about what inspired her to write “Free World Citizen,” Lenee threw her whole body into this tune, playing percussion on the face of the guitar, singing it with passion and toe-tapping rhythm. It was clear she loved this song, as did the audience.

Christie Lenée is a stunning combination of talents. It takes a rare musician to create the music she does. Honestly, I don’t know how she does it. I watched her feet stomp out complimentary rhythms, watched her in awe as both hands created remarkable melodies and sounds on her guitars, and listened to her sing and perform with grace and a certain presence. There was vulnerability to her performance, a willingness to share on an intimate level with an audience she wasn’t familiar with. Authentic comes to mind, as if she was comfortable with herself at all times. Bottom line–to watch Christie Lennée perform is to witness a master who is at one with all aspects of her music, and at many times during the show, with the audience.

Closing in on the end of the show, Lenée performed, “Song for Michael Pukac,” a song she’d played in the final round of the International Fingerstyle Guitar Competition and the first instrumental she’d ever written. It was as if she was playing several guitar parts at the same time. The crowd greeted her on their feet, clapping and whistling in applause.

“We Are One” drew the night to a close as Lenee invited us to sing along to this rhythmic, foot-stomper, with an enlightened message. Her strumming hand kept amazing time without the support of a drummer or bass player. It was the perfect show-closer for a united, and thoroughly enjoyable evening.

Christie Lenée has performed all over the world and is currently on tour. With four albums to her name and a recently released single, “Sterling Highway” she has performed and recorded with Tim Reynolds (Dave Mathews Band) Tommy Emmanuel, Andy McKee, Amy Ray from the Indigo Girls, and many others.

For more information on Christie Lenee: