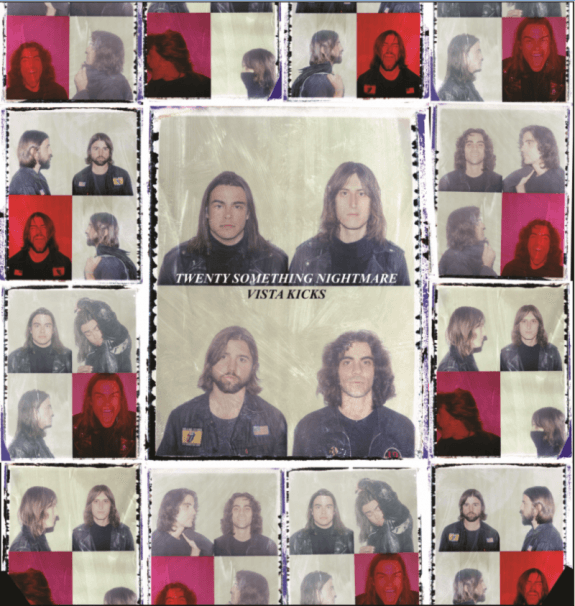 Ambitious California band, Vista Kicks, takes some giant steps in their new sophomore album (18 tracks!,)
Twenty Something Nightmare, due for release on July 13 from Little Hook Records. On this extensive collection, Vista Kicks sets their sonic sights higher than just keeping bodies moving. They want to keep your synapses firing too. Few of these songs settle into a single tempo, groove or even overall feeling. There are more shifts and changes, bordering on outright time-jumps, than I’ve heard on any one album in a long while. Not interested in claiming any particular sub-genre, this is a band that is still exploring.

Even the self-claimed influences (AC/DC, Beatles, Sabbath, Bee Gees, and Michael Jackson) don’t really give you an accurate sense of what to expect when you cue up these tunes, which actually touch on everyone, and everything from Buddy Holly, to the 90s rock they grew up on, to gritty funk, to even a touch of groovy jam-band shenanigans. But I enjoyed the countless directions this album pulled me in. I’m guessing a lot of other people will enjoy it too.

Vista Kicks is a band of guys who grew up together in Northern California. They didn’t just go through similar ‘phases’ of musical appreciation and fandom, they went through them together. That creates a different kind of alchemy than, say, a bunch of gunslinging musical strangers who put their band together by finding each other in “gig wanted” ads. That shared history creates a kind of power, and bond, that allows a band to truly trust and go exploring together. That’s where magic can happen.

A lot of press attention has been on album opener, and first single, “Million Dollar Seller.” In an interesting twist, the band released the single directly into the Public Domain, which means that anyone can use the song (and the B-side “Numbers”) for any commercial or non-commercial purpose, for free. What other indie band can you think of who managed to get coverage in places like Forbes magazine? Publicity savvy moves aside, this is still a powerful song and a great lead-in to the rest of the album, because all the elements are here: Confident, swaggering musicianship that can turn on a dime, lush production with real sonic depth, and some hyper-smooth vocals from Derek Thomas, a frontman who can actually sing.

The swagger gives way to a sweeter, more contemplative vibe on “If I didn’t Have You.” You’ll hear hints of Foster the People in this tune and in the gentle heartbeat of Nolan Le Vine’s drums that build to a gallop as the song ramps up the intensity. “Victim of the Times” rolls by with a similar vibe, calling back mid-tempo 90s rock that was almost-but-not-quite psychedelic.

As you can rightly guess from the title, there are no new messages in “Live, You’re Gonna Die,” just a useful reminder to a new generation that you don’t get bonus points for spending your life miserably following everyone else’s rules. Unfortunately, it is a message that always gets missed by the people who need to heed it most. The band’s hearts stay on their sleeves for “I’m Yours,” a love song with a discernible tension running through it. The song also features some of the first really gnarly guitar breaks from Sam Plecker, reminding everyone that while Vista Kicks is a lot of things, it is also definitely a rock outfit.

In a collection full of shifting gears, the jump to “Cool it” is still a head-turner. This song reminds me so much of early-career Kinks, I had to check Wikipedia to make sure VK wasn’t covering an obscure old Davies brothers B-side. The song is a cross between a straight-up British ‘music hall’ vibe and a slightly demented country magical mystery tour. The listener is then hit with “Wrong Side of Town,” a straight-ahead riff-rocker with a walking, practically stomping, baseline from Trevor Sutton. This is definitely a dose of rock, not funk or jam.

Next up, “Numbers” is more of a head-scratcher than a booty-shaker, which can be a good thing. The intentionally weird-ish audio opening clues you that this isn’t your typical “Summer song.” There are some big ideas here. They just happen to be wrestling with more tempo and intent changes than you’ll find in an entire weekend-long Summer music festival. The feel bounces from a Sublime-esque not-quite-reggae bounce to screaming Santana-esque guitar breaks. To clear your head, the sonic strangeness of “Numbers” is followed by the instrumental “part two” of opening track “Million Dollar Seller” – which is also available for free use in the Public Domain for all you makers and remixers out there.

Some themes are eternal. The lovelorn will find new additions to their heartbreak playlists over the next couple of tracks. “Why Do You Say You Love Me” is a straight-up song of love and wonder that covers the same ground Leadbelly did waaaay back when he howled “Lord, it’s hard to love someone who don’t love you.” Then the sturdy 50s chord progression and melody that backbones “Having a Good Time” is the perfect construction for a classic tale of downbeat teen romantic angst that still manages to sound sonically gorgeous and modern enough for any young fan’s ears in 2018.

“Kelly Come Back” is another sonically ambitious tune that pulls from more influences than I could cram into an online review. The concept of “you never know what you got ’til it’s gone” is another timeless theme for/from anyone’s “nightmarish” 20s, as a young (male) dumbass begs his girl for forgiveness and “one more chance.” The clean, precise guitar work on “I Can’t Think of Anybody but U” frames another lovelorn lament, this time putting the spotlight on Derek Thomas’ inner crooner, tucking in close to the microphone for verses that Chris Isaak would probably like to take a crack at, before the big chorus and sweeping organ/strings chords hit you right between the ears.

Vista Kicks doesn’t slack off on the final three songs as we roll into the homestretch of this large collection. After four tunes about the wounds of love and loss, most of them self-inflicted, along comes “Water Under The Bridge,” a song of acceptance for what has come and gone, and the new lesson (warning?) that “too late” is a real concept that even 20-somethings will eventually have to figure out for themselves.

The album ends with the title song “Twenty Something Nightmare” which is a smart move. Based on conclusions from the previous 17 songs, this track sums it all up at the end. The nightmare of being twenty-something almost always has more to do with our own failings than with the cruelties of the World Machine.

Instead of focusing on one ‘sound’ or an easy 30 second elevator pitch “concept” for a group, a band like this has taken the time to evolve together and slowly create their own sonic universe. They then present that universe to the world and see if anyone wants to join them.

Think about what a rare thing that is, even in a world filled with so many great bands. Rarer still is this: They’re not trying to sound like anything, or anyone else. They’re trying to sound like themselves and that might turn out to be a long and interesting journey for both the band and their fans.

Vista Kicks might be a departure for many visitors and fans of RBM, but it is a trip worth taking. It IS rock and roll and you’ve never heard it played quite exactly this way before. Their musicianship is flawlessly dialed-in and unafraid to go that extra, crazy, experimental step in pursuit of the song’s goal. This is a strong 18 song collection from start to finish. There are, admittedly, a few clunker lines that lean a bit too heavily on the easy/obvious metaphor, but when the lyrical inventiveness catches up with the freewheeling and fearless musicianship, as I’m sure it will, there’ll be no stopping these guys.

For more information on Twenty Something Nightmare by Vista Kicks: