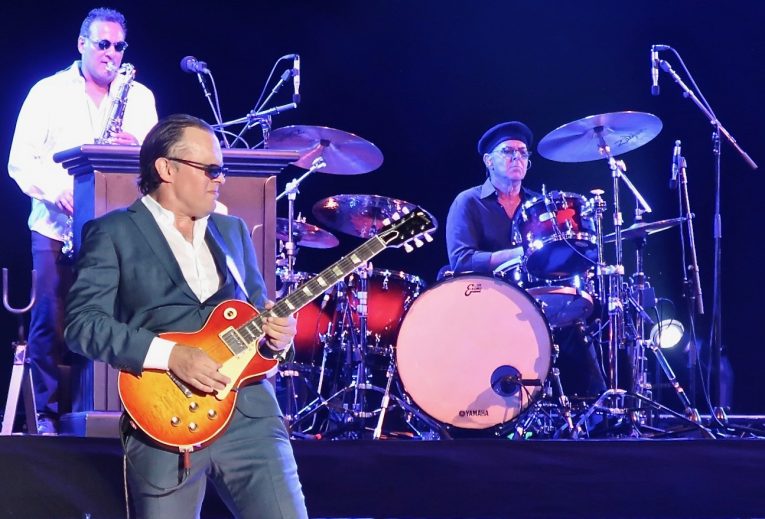 Despite the 90 degree heat, I was excited to see two-time Grammy nominee, “Blues-rock Titan” Joe Bonamassa perform at the Greek Theater, Los Angeles, on August 1st. It had been a couple of years since I’d seen him live and this outdoor venue is one of my favorites.

Besides, I’d promised my husband that if he saw Joe Bonamassa live that he’d become a convert, a loyal fan. He, like a few others, was of the opinion that Joe was a masterful guitar player, a technician if you will, and a little short on soul.

But I knew better.

Seeing Joe B. live is the best introduction to this phenomenal guitarist, singer, songwriter, who at eight years old, opened for B.B. King. He is considered one of the world’s greatest guitarists and has 12 studio albums, 16 live albums and three collaboration albums to his name. He is a virtuoso guitarist and the members of his band are outstanding musicians themselves.

Joe appeared on stage at 8pm in a gray suit, Stratocaster in hand, to join his bandmates. Most of the audience rose to their feet, greeting him with a standing ovation before he even began.

That tells you something.

The crowd, not just older hippies who love the Blues, but guitar fanatics, musicians, tried and true Bonamassa fans and those who were brought along.

After opening with “King Bee Shakedown” and “Evil Mama” from his upcoming, Redemption album, Joe traded out the Strat for a Gibson Les Paul, his trademark guitar. The whole feeling of the set changed then as he and his superb band launched into a slower paced rocker, “Just ‘Cos You Can Don’t Mean You Should” also from Redemption. With exquisite guitar licks and killer tone, Joe sang this Blues, almost Southern rock tune, with heart. Reese Wynans on keys delighted the audience with his vamps and a solo, summoning the audience to their feet once again.

If an audience does in fact affect artists, this crowd’s energy and appreciation changed hands with Joe B. because after this tune, this man was on fire. Joe and the band slid into a monster groove and for 2 ¾ hours we were graced with one of the best performances I’ve ever seen. The band consists of Reese Wynans (keyboards) Anton Fig (drums) Michael Rhoads (bass) Lee Thornburg (trumpet) Paulie Cerra (sax) and two backing singers, Jade MacRae and Mahalia Barnes.

Setting the mood with a groaning guitar, Joe threw himself into “Self Inflicted Wounds,” his vocals full of heartache. It’s a mournful song, and Joe gave in to it. That was the first time I’d heard the real quality of his voice, the beauty of it. Whether I’d previously been focused on his dazzling guitar work, I’m not sure. This song showcased Joe as a soulful singer and blew a soft wind over the audience, now quiet, in reverence.

Albert King’s “Don’t You Lie to Me” came next, as Joe played a red Gibson 335 guitar. This tune had a more syncopated feel than the original and the band was in top form. Trumpet and sax players, Thornburg and Cerra, kicked off the melody and then handed things off to Joe who was now fully loosened up. Wynans blew us away with one kick a** piano solo, which drew whoops and hollers from the crowd.

One of the standouts from the evening “Breaking Up Somebody’s Home,” a funky, R&B rocker that rocked everyone–the audience and the band. Joe swayed back and forth and played off his bass player, Rhoads, and moved across the stage with great groove and feel. At one point during the song, I turned to view the 4,000-seat packed venue, and realized that not one seat was empty. Solos from Wynans on organ and Cerra on sax, wowed everyone. This tune featured the entire band’s talents, including Joe playing an absolutely stunning guitar solo that turned into a full on jam.

At this point, my husband turned to me and said, “I take back everything I’ve said about him. He is incredible, just incredible.”

Thanks to Linda Moke (missmoke007 on YouTube ) for this video of “Breaking Up Somebody’s Home.” Be sure to wait for Joe’s guitar solo.

After this song ended, Joe took off his glasses and spoke to the audience to welcome us. He said, “I’m one of you. I know what it takes to drive seven miles and have it take three hours.” Everyone laughed, having just fought rush hour traffic in L.A. to get there. Unless you live here, you cannot imagine what it is like. But for some of us, we make the drive to see outstanding live shows. This one was definitely worth it.

Joe Bonamassa was funny, self-effacing with his humor and we loved him all the more for it.

After more crowd favorites like “Slow Train” and “Nobody Loves Me But My Mother,” a BB King cover, Joe and the band performed a couple of Led Zeppelin covers, the second being “How Many More Times” from his album, British Blues Explosion Live. A breathtaking version, once again Joe and the band wowed us with outstanding musicianship. But more than that, everyone on stage seemed to be having such a good time. The energy was infectious. Maybe the respect and love from the crowd allowed for more freedom from Joe and his band, but I knew then that we were witnessing a special show that night.

A searing ballad, “Slow Gin” closed out the show. This slow burn of a song showcased Joe’s voice from soulful and soft to clear with emotional punch. His solo on his Les Paul guitar was not only impressive but moving.

Was this a show planned down to the wire? Probably. Even down to choreography of band members interacting on certain songs? Maybe. Did I care? Not at all. Because Joe Bonamassa and the band delivered beyond my expectations. The musicianship on every single one of the 15 songs was superb, outstanding.