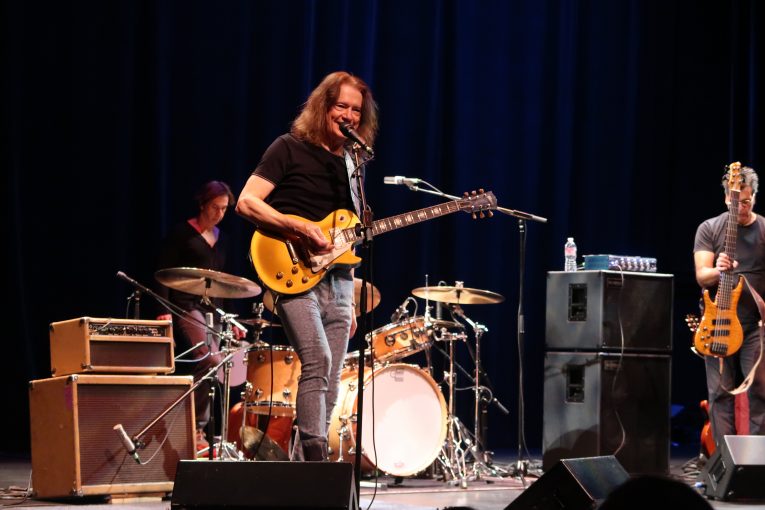 Not everyone knows of five-time Grammy nominee, master guitarist, Robben Ford who achieved world-wide fame for being a solo artist and for his collaborations with Miles Davis, George Harrison, Steely Dan, Joni Mitchell, Dizzy Gillespie, and many more. To see Ford perform his blend of blues, jazz and rock in an intimate setting, is a once in a lifetime experience. On September 21, he and three other superb musicians put on an amazing show at Theatre Raymond Kabbaz in Los Angeles, a 220 seat venue.

Robben Ford appeared on stage, Les Paul gold top in hand, alongside drummer Toss Panos, guitarist Jeff McErlain, and Jimmy Haslip on six-string bass. Ford greeted the audience and mentioned that this show was almost like a concert in your living room. And it was.

Ford’s gentle nature and humor about a few technical snafus, bonded us to him immediately. This guitar god was human. After a few sound issues were resolved, Robben Ford and his band of class-A musicians got off to a ripping start.

This guitar virtuoso, singer-songwriter has a tremendous music vocabulary of jazz, blues and rock. It’s almost dizzying to take in a full set—your mind wants to anchor on one or two genres but instead Ford dazzled without even trying with unique blends of genres and interesting time signatures and syncopation.

And then there’s the groove.

Opening with the Lightnin’ Hopkins song, “Good Times” from his latest album, Made to Last, Ford played the interesting and almost experimental opening riff that turned into a full on showcase for his blistering guitar work and tight rhythm. Throughout numbers such as “I’m Better Off (For What I Haven’t Done)”, and “Bullet” off his Renegade Creation album, a tremendous groove settled in with Ford and the band, inciting a few shouts of praise from the audience. 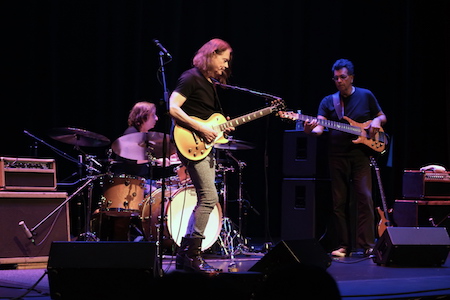 Ford explained that the next tune was on Jeff McErlain’s upcoming album that he’d produced. What transpired was an electrifying song/jam of jazz-rock fusion, an instrumental featuring McErlain on guitar. I believe the song was called, “The Groove”—aptly named as it had plenty of it. To witness such exquisite musicianship from each of the players (including a stunning bass solo by Haslip) made me want to jump up and shout. But I held back because this audience seemed a bit subdued for that.

Mid-show Robben Ford introduced the next tune, “Cannonball Shuffle”, a song he’d written for Freddie King. He then launched into a great blues instrumental that paid tribute to the man himself. Ford rocked it, hands blazing the fretboard. McErlain also took a guitar solo and in contrast to Ford’s gentle touch, his guitar chops were muscular and whip-fast.

What I found interesting at this point in the show was that Ford made a lot of room for his players to shine in the spotlight. And it wasn’t just the usual one to two-minute solo either. It made me think that this was more about the band as a unit. Not many artists would be so generous.

On the light-hearted 12-bar blues number, “Automobile Blues”, Ford began with a bassy riff and then jumped in with his own jazz flavors, letting loose with it. In full stride now, Ford’s vocals, soulful and bluesy, were full-bodied in tone. He performed one of the most beautiful blues-jazz guitar solos.

If a drummer takes a solo while the rest of the band is completely silent, he/she had better be pretty tremendous. No problem there. Toss Panos played one of the best drum solos I’d ever heard. Mid solo, one of his sticks flew from his hand to the floor. Without a hitch, Panos grabbed another and kept right on playing.

“Crazy For My Baby” a Chicago blues tune with great rhythm by Willie Dixon, featured on Ford’s album, Made To Last, was yet another classic rhythm stomper and the band rocked it. The band completely in sync, Ford played another jaw-dropping guitar solo. At that point, mesmerized by the talent on stage, I wondered if some of the audience members didn’t know who the great Robben Ford actually was. The theater, part of a school, was filled with people in their thirties and early forties, not the usual age group for a blues show. The woman next to me kept checking her Apple watch, something that didn’t exactly enhance my experience as the screen lit up each time.

Always a cheerleader, I clapped and whooped louder.

Eventually the audience got on board and gave Robben Ford the appreciation he deserved with a standing ovation after his final number. He and the band performed, “Fool’s Paradise” as the encore, a slow, blues and breezy number with jazz overtones. It wowed everyone.

For more information on  Robben Ford: