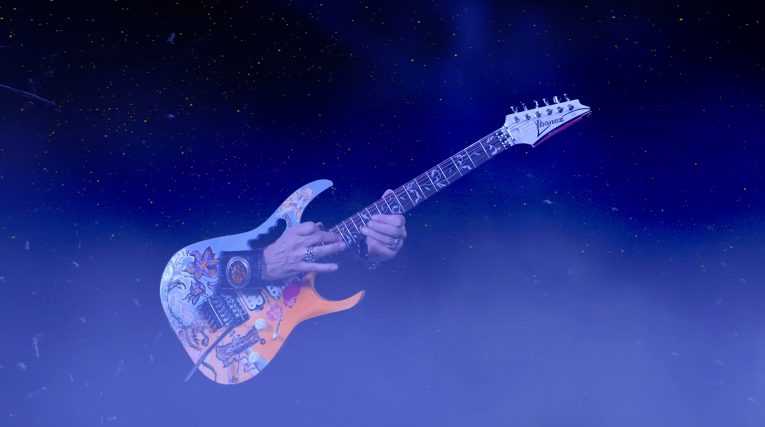 Steve Vai has released a music video for “Dark Matter” via his Official YouTube Channel SteveVaiHimself today.  View the video below Vai teamed with Blackmagic Design, Moai Films and director Lukas Colombo on the video, with Moai Films producing.  “Dark Matter” is one of the songs from Modern Primitive, a collection of previously unreleased material delivered in tandem with Passion and Warfare 25th Anniversary Edition by Sony Music Entertainment and Legacy Recordings.

Long known as one of the top guitarists in the world, Vai has won three Grammy Awards and worked with artists such as Frank Zappa, David Lee Roth, Whitesnake, and a myriad of others.  Vai’s Passion and Warfare album is considered one of rock’s landmark albums.

In producing his newest music video, Vai wanted to do something special. “I wanted to create something that not only looked other worldly, but was also shot uniquely as well,” Vai said.  “The idea was to create an alien type landscape where each band member was filmed at a different speed and then brought together in various shots.  I had to learn the song backwards!  There are all these little complexities, which is a fun challenge, but it’s almost like wearing a straight jacket and trying to run a forward marathon with eyes only in the back of your head.”

Moai Films brought in VFX Supervisors Bruce Jergens and Nick Torres to help guide the design. The VFX team combined 2D and 3D elements to create the unique environments. “We wanted to have a completely alien environment,” said Torres, “with tall spires as mountains and a glassy still ocean with a fast rolling fog on top.”

Vai, who hosted the Big Mama Jama Jamathon — a 53 1/2-consecutive-hour event at Musicians Institute in Hollywood to benefit non-profit foster care and adoption agency Extraordinary Families — with guests such as Dave Navarro, Moby, Orianthi, Al Di Meola and Dweezil Zappa, Sept. 28-30 will continue to have a busy fall season.  Vai will perform his own compositions with the Alabama Symphony Orchestra (Carlos Izcaray, Conductor) in Birmingham, AL at UAB’s Alys Stephens Center on Nov. 2, before joining Zakk Wylde, Yngwie Malmsteen, Nuno Bettencourt, and Tosin Abasi in the supergroup Generation Axe for a 32-date tour of North America, beginning November 7 at the Fox Theater in Oakland, CA.

“The Generation Axe show is a unique performance of five fiercely talented guitar players coming together to create a 6-string extravaganza that is sure to amaze and delight,” Vai said.

Each Generation Axe tour stop will include a variety of collaborations by the five players, including everyone performing together as one cohesive band with a rhythm section including Pete Griffin (Dweezil Zappa, Stanley Clarke, Edgar Winter) on bass, Nick Marinovich (Yngwie Malmsteen) on keys, and JP Bouvet on drums.  Vai, Wylde, Malmsteen, Bettencourt and Abasi will perform songs from their various catalogs and join forces on some well-known songs (as well as probably a few unexpected, unearthed gems).  Special VIP packages are available.  For more information:  www.generationaxe.com

Fans can pre-order Generation Axe’s forthcoming release, The Guitars that Destroyed the World:  Live in China on CD and vinyl, along with autographed copies, signed guitars, merch bundles and much more at https://www.pledgemusic.com/projects/generation-axe