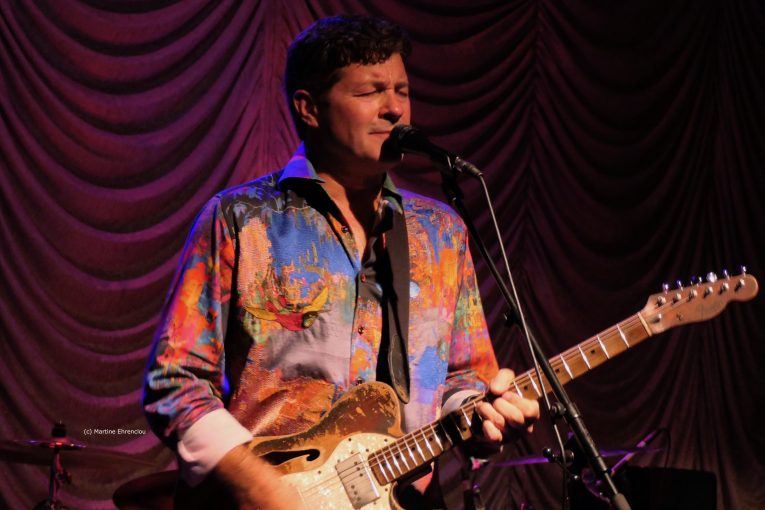 With a capacity of 280, I considered myself lucky to see blues guitarist, singer-songwriter, Tab Benoit, in such an intimate setting. We’d reserved a table so we could see the stage. Little did I know that 2/3 of the venue was standing room only. Envision a mosh pit but reversed in size with tables lining the back walls behind the standing area leading up to the stage. I didn’t know how this was going to turn out. The venue was new to me.

Guitarist, singer-songwriter, Eric Johanson kicked off the evening with tunes from his latest album, Burn It Down, recorded on Whiskey Bayou Records. With the rhythm master himself, Tab Benoit on drums and Corey Duplechin on bass, Johanson performed his brand of blues-rock and roots music, a fresh and contemporary spin with dark, brooding overtones. He is a stellar guitar player, with a dark, dirty sound, often with distortion that reminded me a bit of Gary Clark Jr.

By this time, I’d realized that standing at the stage in the mosh pit of sorts, was the only way to go for a good listening experience and to see the band up close. Crouched by the side of the stage, I was grateful to have the option of being steps away from the performing musicians and I understood then that this was part of the appeal of Saint Rocke. If you arrive early enough, you can in fact get so close to the artists that you can easily merge with the performance.

Which I did. Being that close was thrilling.

Next up was the second Benoit protégé, Jeff McCarty, and who also recorded his album on Whiskey Bayou Records. What a voice. A total surprise as I’d never heard of him before. Talk about pipes and soul. This guy threw himself into each tune, understanding how to connect with the audience and deliver a great performance. With Benoit again on drums, McCarty interacted with the crowd, feeding off their excitement, performing tunes from his album, Step Out. McCarty’s sound has an R&B/rock vibe with great rhythm. This singer has it going on, a Southern Rock/soul singer whose sweat and grit had carried him from Louisiana and into the hands of Tab Benoit, and to share stages with George Jones, Carrie Underwood, Kelly Clarkson, and more.

The band took a break and it wasn’t until then did I notice the TVs lining the walls of the venue and how the audience now had their eyes glued to the baseball game. Which I understood, because after all, the hometown team, the Los Angeles Dodgers, were playing in the World Series playoffs. I checked in on my husband and friends who I’d abandoned for the mosh pit and found myself in an entirely different world with the crowd thrusting their hands in the air and yelling when the Dodgers hit a home run.

When Tab Benoit appeared on stage with his trademark Telecaster Thinline guitar, jeans, and colorful shirt, all eyes turned back to him. I’d waited several years to see Tab Benoit live and I wasn’t going to miss a thing so I maneuvered myself back through the tight crowd of people to my spot by the side of the stage. Members of the blues trio took their places on stage, this time with Tab Benoit front and center.

Tab Benoit is a true entertainer with vocals packed with passion and pain. His downright killer guitar chops dazzled the audience on several of his hit songs, “Shelter Me” “Medicine”, “Night Train” “Nice and Warm” “Dirty Dishes” and more. The crowd, spanning in age from 20’s to 60’s, swayed and danced to Benoit’s music. At one point I made my way back to our table, and took in Tab Benoit and the crowd from another vantage point. There were older guys in the back, singing along with Benoit, some letting loose with bent knees and outstretched arms as if they were performing the songs themselves. 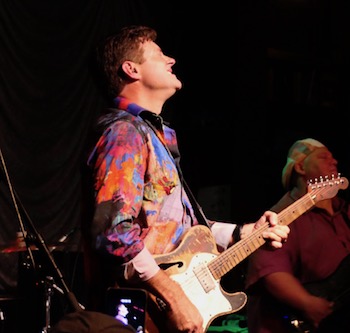 I then realized that this was the church of Tab Benoit. It’s no wonder he won the BB King Entertainer of the Year award, among others. He told interesting stories and funny jokes. He had the audience in his hands and has some kind of way of commanding a room of his loyal blues fans.

At one point in the evening he said to us, “The Blues is a dying art form. That’s why you’re here, right? To listen to real music.”

Benoit continued, all with his Southern drawl. “There’s a lot of fake music out there. We want real music. That’s what we’re trying to do with Whiskey Bayou Records.” He explained that with his record label, he records and produces like they used to. “We play one song and record. And if you can’t cut it, you’re fired.”

Again, the crowd laughed with Benoit.

Chuckling himself, Benoit cut in and said, “Nah, but the second time if you can’t do it then you’re fired.” He continued, “The next song we’re going to play is on one of my records, but I don’t know which one, ‘cause I don’t listen to them.”

Everyone in that place laughed. We loved him for that.

Benoit then launched into his song, “Darkness” from his albums, Legacy: The Best of Tab Benoit and Night Train To Nashville. This song cuts to the core, beautiful in its longing and poetry of love lost. Benoit gave himself over to this song of heartache, and the crowd sang with him once the first chorus chimed in. His guitar solo was a work of art really. Soulful, moving and melodic. He is some player, knowing how powerful it is to play less, rather than filling every bar with notes.

Benoit made that guitar sing, and personally, I think you have to experience that live. This Southern bluesman has a rare feel on guitar, and he plays it with passion, his music touching deep places. It was all about making his fans feel something, rather than a showman showing off. Being able to make a guitar moan is one thing, but to feel that while playing it, is something else altogether.

Pulling us out of the reverie from the last tune, Benoit and the band launched into “Feel Alright,” a boogie, up-tempo number that recharged the energy in the room. I believe he followed that tune with, “Whole Lotta Soul,” a blues, swamp rocker, which extended into a full-on, impressive jam that lasted over seven minutes.

Benoit followed up that song with more humor. He let us know that the show was coming to a close and then said he wished he could play all night. I believed him. He mentioned that he hadn’t performed at this place in such a long time. “Southern California must have gotten further away from Louisiana since then,” and the expression on his face was playful, fun. He was having a good time too.

From blues, Southern blues, country with some twang, and even a blues-rock jam, Tab Benoit is something else. Someone to see live for sure.