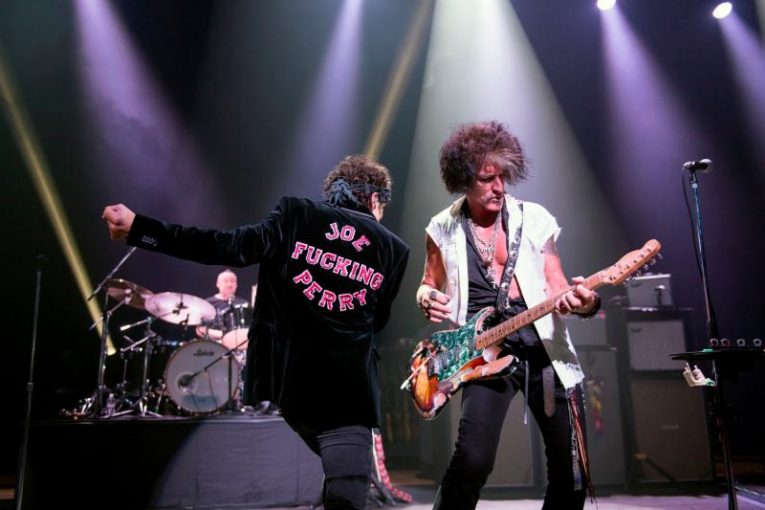 Following a guest performance during Billy Joel’s show last night at Madison Square Garden, Joe Perry, legendary guitarist and co-producer of Aerosmith,  is hospitalized after he experienced shortness of breath and was treated backstage by paramedics who gave the guitarist oxygen and used a tracheal tube to clear his airway before taking him to a hospital. This morning Perry remains in the hospital where he is alert and responsive. The Aerosmith guitarist will be unable to appear today at Rock And Roll Fantasy Camp in Florida and apologizes to those attending. Perry is expected to return to the road later this month.

UPDATE: According to Billboard, Joe Perry let his fans know he is feeling much better. Perry says, “Doing well, thanks for all the love and support.”

Joe Perry just released a new single and video, “Quake”  from his soon to be released vinyl-only version of Perry’s Sweetzerland Manifesto (Roman Records.) The video features Perry along with his guitar and amp, firing up alongside the lyrics and dancing couple who embody the tune’s freewheeling spirit.

Perry is expected to return to the road later this month. Check tour schedule here http://joeperry.com

Along with choice cuts from his catalog of solo records, Joe Perry will perform rarely played Aerosmith classics from the band’s early records including “Toys in the Attic,” “Get Your Wings and “Rocks” among others. Sweetzerland Manifesto marks Joe’s sixth solo album and is made up of 10 new tracks except for the cover of “Eve of Destruction” with Joe on lead vocals and Johnny Depp on drums. The album features guest appearances from a long list of Joe’s friends, colleagues and rock and roll icons. Highlights include “Aye, Aye, Aye” which Joe co-wrote with the track’s vocalist, Robin Zander and three collaborations with David Johansen, who sings “I Wanna Roll,” Haberdasher Blues,” and “I’m Going Crazy and many more.

We wish Joe Perry a speedy recovery and send him our best wishes.

Throughout his career, the electrifying lead guitarist of Aerosmith–America’s Greatest Rock & Roll Band–JOE PERRY has achieved permanent iconic stature in the pantheon of rock. He has helped to drive his band, over the course of four decades, to sales of more than 150 million albums, critical acclaim, four Grammy Awards (one of which includes the guitar-based instrumental “Boogie Man”) and induction into the Rock and Roll Hall of Fame. JOE PERRY’s work with Aerosmith has resulted in an unending array of accolades and honors. Beyond their Grammy Awards and Rock and Roll Hall of Fame induction, other key milestones over the nearly 50 year history include: 12 MTV Video Awards; two People’s Choice Awards; six Billboard Music Awards; eight American Music Awards; 23 Boston Music Awards; and an Academy Award nomination for Best Song, “I Don’t Want to Miss a Thing” (from the soundtrack to Armageddon).