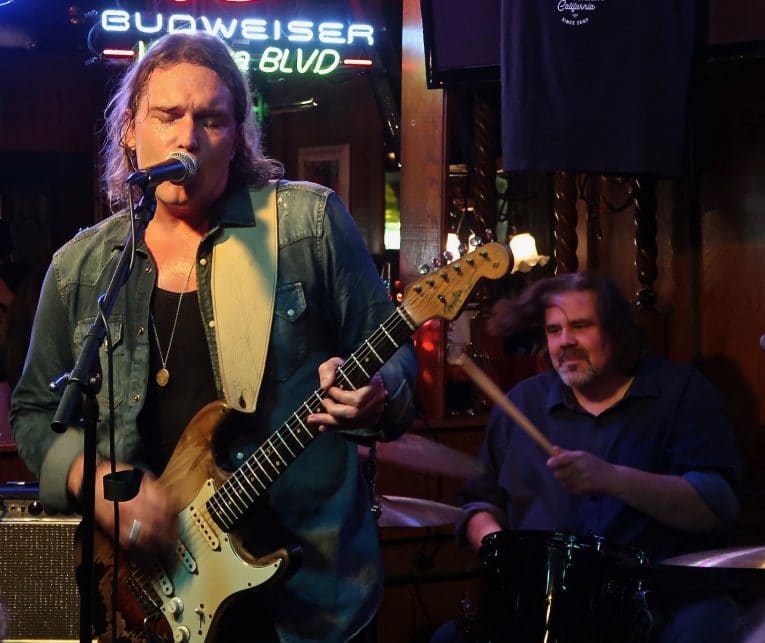 Many don’t like to brave the Los Angeles highways on New Year’s Eve, even for a concert. But we were going to see Philip Sayce at the Maui Sugar Mill in Tarzana, CA on December 31st and I wouldn’t have missed it for the world. That’s how good a guitar player, singer-songwriter Philip Sayce is, along with drummer Michael Leasure and Fred Mandel on keyboards.

This was music royalty.

Pulling into the mall parking lot of the Maui Sugar Mill, most wouldn’t guess that some of the absolute best and legendary musicians are brought in specifically to perform on weekends and Monday nights by Blues promoter, producer, guitarist, Cadillac Zack, who’s been doing this since 1992, much to the delight of Blues fans and musicians alike.

This small, intimate venue was jam-packed with people, the room charged with energy. You could feel it around you, with people having come from all over to see the great Philip Sayce. Two people next to us at our table a few feet from the stage, had driven almost 100 miles to see the Canadian musician who has performed, toured and recorded with Jeff Healey, Melissa Etheridge, Uncle Kracker and more. As a solo artist, Sayce has released eight albums, his latest being Scorched Earth in 2016. Philip Sayce is known as a virtuoso rock and blues guitar player, singer and songwriter.

With Fender Stratocaster in hand, Philip Sayce appeared on stage, dressed casually but with a bit of an edge, along with drummer Michael Leasure and keyboard player, Fred Mandel. Eyes alive with excitement, Sayce greeted the crowd and asked, “Are you ready for some blues?”

After thanking Zack for putting this show together, Sayce and the band launched into two and a half hours of some of the best blues and rock that rattled the rafters of the Maui Sugar Mill Saloon.

Opening with  the rock tune, “On The Road Again” from his album, Influence, Philip Sayce gripped the audience immediately with dazzling guitar licks and rock star vocals. A musician with this kind of fire power would have to be backed by a drummer like Michael Leasure (Edgar Winter, Water Trout) and a keyboard player like Fred Mandel (Alice Cooper, Pink Floyd, Cheap Trick, Elton John, Queen.) The three of them put on a performance that no one in that audience will soon forget.

But it was more than world class musicianship—Sayce is a dynamic performer, all raw emotion and energy, giving himself over completely to the music. If there is one word to define that, it would be authentic. Watching him play and sing, I sensed something different, something rare, something down to earth in the way he performed. No wizardry, no Oz—it’s all him front and center. You combine that with monster guitar, vocals and a powerful stage presence, and you have one extraordinary artist and frontman. 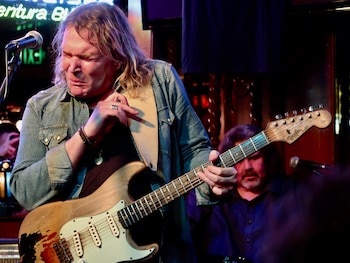 This trio knocked it out of the park for the entire set. There was some kind of magic happening on that stage and to see it up close and personal, instead of at a stadium or amphitheater, was absolutely thrilling.

Sayce and the band sped full throttle into the next tune by Freddie King, “You Can Run But You Can’t Hide” and the night took off like a speeding train—that’s how intense and hard charging this band was, and just as smooth and in sync.

Lighting fast finger work on guitar with deep seated feel, Sayce rocked out with both control and wild abandon. On “Who Knows,” which flowed into a 9-minute slower rock jam, the song showcased his formidable vocal chops. Coupled with six-string guitar bends and muscular guitar vibrato, Sayce simply killed it. Using guitar effects to enhance certain solos, his guitar work was not only masterful but deeply soulful.

Michael Leasure on drums was so good I could hardly believe it. Having never seen him play live before, it was exhilarating to watch this kind of mind-blowing, emotional drumming. He and Sayce were so in sync, it was as if we were witnessing two masters who had played together for decades. They were that locked down tight, together with the third maestro, Mandel on keyboards. The music took over for each of them, almost like they had entered a new dimension of sound and space.

To break up the intensity, Sayce began with a slower paced instrumental, “Aberystwyth,” a song he named for the town he was born in. He made his guitar sing, groan and growl, coaxing beautiful tones from his Strat. The song brought to mind images of ocean landscapes from the west coast of Wales.

At this point, I took in the crowd around us. People standing behind the tables had moved in toward to the stage, cramming in to get a better view. It was a sight to behold, this mass of people leaning toward Sayce and the band, arms outstretched with phones high in the air to capture on video some of the magic that was transpiring on stage.

Now close to the keyboard player, Philip Sayce launched into the groove-based blues-rocker, “Beautiful.” Rhythm was the essence of this number. Sayce dug into the groove on guitar and vocals on a song that surely was a seduction when it was written. Vocally, he hit the high notes perfectly with only the aid of a good ear. Falsetto like that is hard to come by. Leasure held court on drums, his arms ripping the air with drumsticks, hair flying around his face.

One of the many highlights of the evening was the Hendrix influenced tune, “Angels Live Inside” from Sayce’s album, Peace Machine. He introduced the song by saying, “I’m going to cut these guys loose on this song,” referring to Mandel and Leasure.

With interesting chord progressions and a hard rock feel, this tune featured Sayce once again ripping it up on guitar, letting loose on a solo with grunge effects. As with each of the tunes performed that night, Sayce surrendered to the music, channeling emotion into his playing with no outside distraction. It was as if he simply engaged and something locked into place. And from that place, whatever it is, comes other worldly musicianship with an edge.

Mandel then performed an insane solo on organ—inspired to say the least. His hands moved up and down on the keys, rhythmic and syncopated, totally in sync with Leasure’s drumming. Having played on some of the biggest albums in rock history, Mandel nailed an organ solo that completed the trifecta of superb musicianship on that stage.

During the same song which turned into a full on jam, Michael Leasure began his solo with a change in tempo. Both feet working the drums, hands drawing drumsticks through the air, Leasure threw his whole body and spirit into it. This drummer gave us the drum solo of our lives. Seamlessly the band moved back into the song with Sayce back on guitar and vocals.

The performance was electrifying. The crowd went crazy–clapping, whooping and hollering.

Thanks to 1AnitrasDance for the great video.


After the requisite “Auld Lang Syne” at midnight, Sayce wished us all a happy new year. He and the band then performed a rocked out version of “Cinnamon Girl” by Neil Young which then bled into the Beatles’ tune, “I Want You (She’s So Heavy.)” While playing his guitar, Sayce moved into the crowd from the stage, making his way into almost every area of the club to reach the people. How he did that with so many standing behind the tables, I don’t know, but he delighted the entire audience with his showmanship.

Before the set was over, Sayce once again introduced his bandmates and left us with an important message to be kind to each other. Then he and the band stormed into another rocker, “I’m Going Home” from his album,  Influence.

Philip Sayce, Michael Leasure and Ed Mandel ushered in the New Year for us with a show that’s still with me now. I wasn’t alone in my gratitude to these stellar musicians and to Cadillac Zack for putting it all together.

For more information about Philip Sayce: