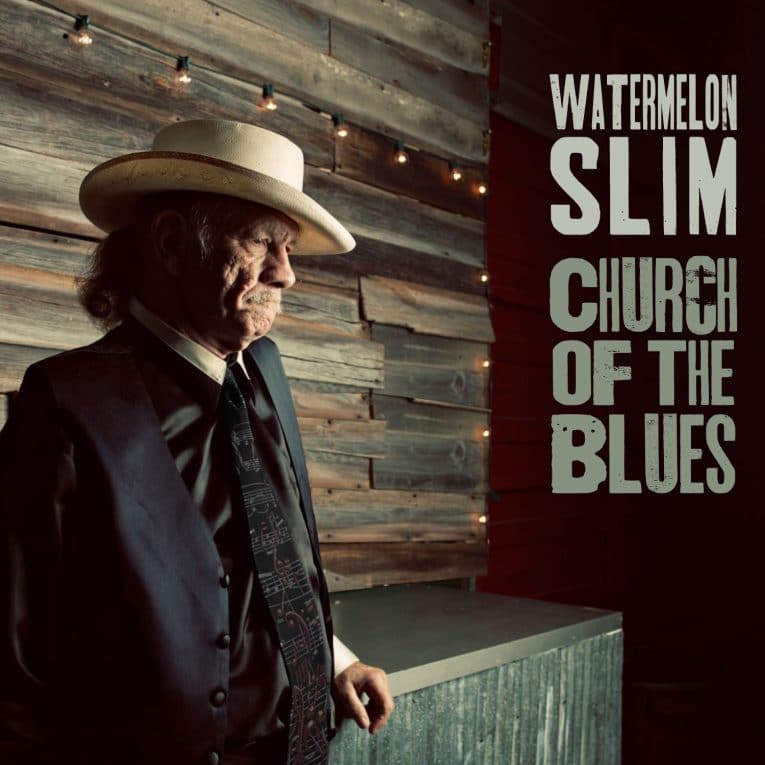 Sometimes the best way to start a new year is to go a bit old school. You won’t do better here in 2019 than Northern Blues’ January 25th release of Watermelon Slim’s Church of the Blues. In fact, you’ll want a front row pew.

This fourteen song collection by the venerable blues veteran, Watermelon Slim, is a sweet seven and seven cocktail; half originals and half covers, all well-crafted and approached in Slim’s unique style of slide guitar, soul-deep harmonica and honest vocals. Backed by the stalwart rhythms of Brian Wells’ drums and John Allouise’s spare and steady bass, and accompanied by some very special guests, Slim further cements his status as a bonafide living legend. Listen in as he uses some of the oldest traditions in the Blues to get you up-to-date on everything that is happening now, in his heart, in his head and in the world around him.

Special guests include quite a lineup: Bob Margolin on guitar, Sherman Holmes on vocals, John Nemeth on vocals, Red Young on keys, Nick Schnebelen on guitar and slide, Joe Louis Walker on guitar, Albert Castiglia on guitar, and more.

You won’t find a more traditional Blues subject than a penitent sinner’s worries about his final judgment, and “St. Peter’s Ledger” delivers. In between a litany of confessions, Slim’s hot slide breaks hint at the worry that even now, said sinner might not be ready to repent completely. He expounds on more earthly woes on “Tax Man Blues.” Given his many decades as a laborer and truck driver, you know he is speaking from personal experience when he looks at all those deductions from his hard-earned weekly pay.

The production gets a bit slicker and the sound a lot bigger on McKinley Morganfield’s classic “Gypsy Woman.” Propelled by a tight and tasty horn section and some standout guitar playing from guest Bob Margolin, this fat, strolling Chicago Blues-inspired tune also includes one of the best harmonica breaks you’re likely to hear anywhere this year. This tune alone is worth the price of the album. The horns stick around to add some additional swing to “Post Modern Blues.” Slim’s unique, buzzy slide tone is the star of “Get Out My Life Woman,” another classic lament about that girl who doesn’t love you anymore, but still refuses to let you go.

The classic soul-sway of “Mni Wiconi – The WaterSong” is a disguise for a straight-up protest song and timely environmental call-to-arms. Further proof (though none was needed,) that these classic structures and tones have something important to say to today’s audiences. Far from preachy though, the heartfelt slide break tells you exactly where this song is coming from. Slim and the band then lighten things up with “Me and My Woman,” a toe-tapper about the kind of difficult relationship that today’s Facebook denizens would describe as “It’s Complicated.” Next up is a fearless run at the roots-deep “Smokestack Lightning” that Slim attacks with the kind of confidence that only comes from decades of earned legitimacy. The pain and menace sounds pretty real to me.

Another personal Blues that keeps it legit, the conversational “That Ole 1-4-5” finds Slim telling his tale in his typically honest terms; “I’ve had me some blessings and many hard lessons,” and as always, the songs are never an excuse for the solo. The instrumental breaks here feel like necessary extensions of the feelings he’s expressed in his lyrics, which is a Blues as the Blues can get. And just when you think it can’t get any deeper, Slim uncorks “Hollar #4,” a positively subterranean Blues hung on nothing more than a heartbeat thump and his low, moaning holler, because nothing else is needed. Feel this one deep in your ribcage as Slim professes, in language as simple as it is raw, his truth. By the time his harmonica break slips in to punctuate these truths, you’ll be questioning your own priorities. The relentless and syrupy rhythms of “61 Highway Blues” represent Slim’s take on Mississippi Fred McDowell’s classic, which he makes his own with that unique slide style and his intimate, conversational vocals. The band is off to the races, chasing Slim’s rollicking central riff on “Too Much Alcohol” which, as you might expect, sounds like he isn’t quite ready to “take the pledge” just yet.

Don’t be deceived by the upbeat swing of “Charlottesville (Blues for my Nation.)” This is a devastating indictment of where this country finds itself in 2019, told by a guy who has been around long enough to see how far we’ve fallen from our collective idea of ourselves. The tune expresses, in no uncertain terms, the real “traditional values” generations of Americans have defended and fought for. Much like the earlier “Mni Wiconi” this isn’t just a song, it is a call-to-arms louder than a blast from a Civil Defense siren.

Closing with a funny, almost novelty tune like “Halloween Mama” with its goofy Farfisa organ riffs and joke-filled lyrics might be an odd choice for such a raw and direct collection, but it feels like typical Slim; managing to subvert your expectations while still delivering the goods. As any performer with decades of experience will tell ya: Have you say, for sure, but it is always a smart move to leave an audience smiling.

Sometimes the best way to start a new year is to go a little old school. If you agree with me then you’ll want to add this powerful album to your January heavy rotation.

For more information on Church of the Blues by Watermelon Slim: