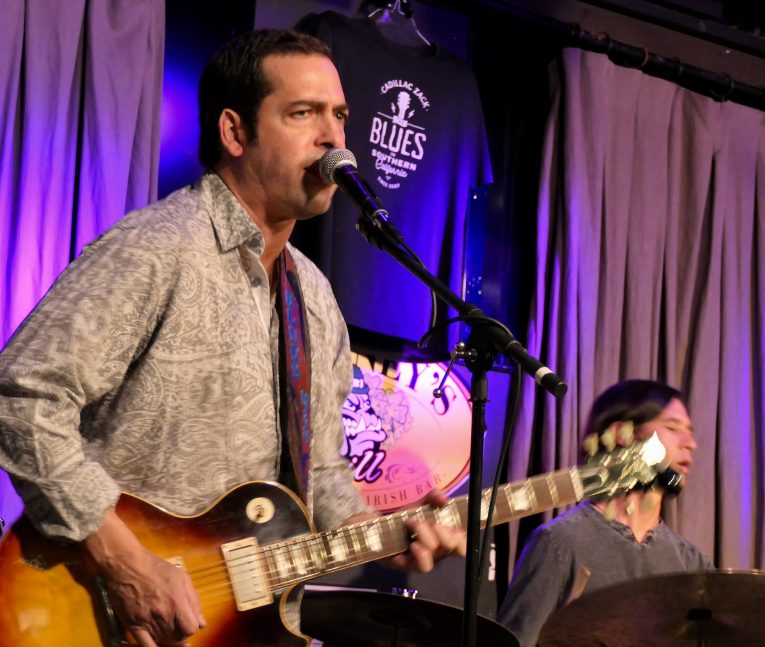 As part of his “Titans Of Blues-Rock Series,” Blues promotor Cadillac Zack brought the phenomenal blues-rock guitarist, singer, Albert Castiglia to Malainey’s Grill in Long Beach, CA on February 24, 2019. And what a show it was.

Nestled in a beachy mall overlooking the ocean, this intimate venue doesn’t look like it would have some of the best blues around on Sunday nights, but it does thanks to Cadillac Zack.

Opening for Albert Castiglia, The Byrom Brothers kicked off the evening with some funky, blues and rock. What a delightful surprise they were. With Monty Byrom on guitar and vocals, his brother Tanner Byrom on drums, Wil Anderson on bass and Chris Neufeld on keys, they performed catchy, rhythmic tunes, one of which Monty Byrom co-wrote with Beth Hart. With several albums on major record labels, this is one tight and talented band.

The venue was packed tight with people eager to see the great Albert Castiglia, known for rocking the blues with visceral, muscular guitar riffs, full bodied, soulful vocals and all around great tunes. I’d waited to see Castiglia for some time now and was thrilled to be witnessing one of the great players of our time.

“Woman Don’t Lie” powered up the evening from Castiglia’s latest album, Up All Night. A rocking blues number that jumpstarted the night of superb musicianship from Castiglia, bass player Jimmy Pritchard, and drummer Brian Menendez.

Albert Castiglia is one helluva guitarist and singer with dazzling intensity and feel. It’s one thing to play lightening fast solos, and another entirely to be at one with the guitar and music. Hand-picked by Junior Wells to play in his band and to do a tour of the world, this gives you an idea of just how rooted in blues Castiglia really is. He’s also performed and collaborated with a host of greats such as Pinetop Perkins, Melvin Taylor, Ronnie Earl, Ronnie Baker Brooks, Sandra Hall and more.

With plenty of “wah” on his guitar, Castiglia and the band launched into “I Been Up All Night,” a tremendous blues-rock tune from his album of the same name. A monster guitar player, Castiglia’s vocals are bassy with just enough rasp.

By this time the dance floor was packed with people of all ages, mostly upwards of 45. Some completely let loose with dips to the floor, karate-like moves and swinging hips. Had they attended Woodstock and never lost their zest for great music with outstanding musicians? They were so into the music, down to interacting with Castiglia on stage. You don’t often see people ages 50 to late 70’s rocking out on the dance floor.

“Quit Your Bitchin’” is just as it sounds—a slower blues tune with a bite. Sung and performed with passion and grit, Castiglia punched out the lyrics and ripped notes on his Les Paul. This 12-bar blues allowed Albert to make his guitar sing and whine. He seemed to be feeling it too and graced us with some humor that the song definitely called for. His guitar solo was downright beautiful—still edgy and intense but with soul and great groove.

As the evening progressed, Castiglia got funnier, making jokes and cracking up the audience. He’s a good entertainer, human with some stories to share. One was about watching The Honeymooners tv show with his dad, which then led into the next song, “Hucklebuck.”

Castiglia is a powerhouse on stage. He doesn’t move around a lot, but there’s tremendous energy in his singing and guitar chops. After a number of songs such as “Chase Her Around The House” and the Willie Dixon cover, “I’m Your Hoochie Coochie Man,” he was fully in his element and scattered more jokes and funny comments in between songs.

And in a more tender moment, Albert revealed that his daughter loved Etta James and that he’d written an instrumental version of “I’d Rather Go Blind” for her. I don’t know how many people caught it as the venue was heating up with drinks, talking and laughter, but the song was so beautiful and moving with sustained notes and pauses between the riffs. Talk about tone and feel. This was stunning.

Closing out the show, Castiglia and the band performed “Going Down Slow,” one of my favorite songs of the night. A rocked out rhythmic version of the blues standard, it had a Led Zeppelin feel with a descending bass line and an innovative arrangement. Albert sang it with gusto and soul.

Albert Castiglia and his band are a must see. For more videos of the show see here.

For more information about Albert Castiglia: