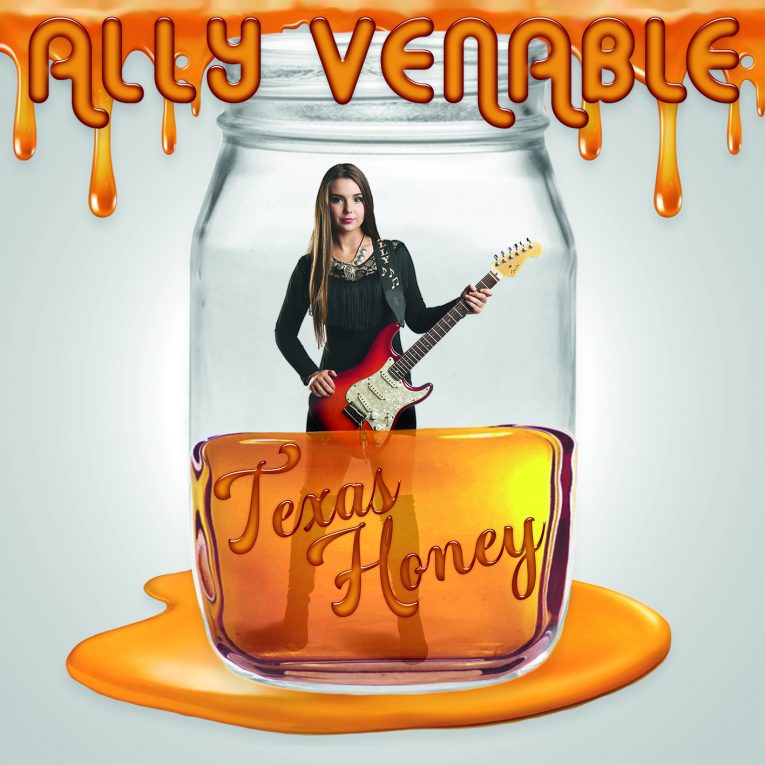 East Texas’ own Ally Venable releases her third album, Texas Honey on March 22nd via Ruf Records. The East Texas legend-in-the-making stuck with her usual volatile power trio configuration for most of this 11-track collection, but there are also a few well-placed guest appearances by the likes of keyboardist Lewis Stephens and guitarists Mike Zito and Eric Gales.

As I’ve probably written too many times before, a power trio really only works if all three players can keep up with each other, and each fill their third of the sonic spectrum. Drummer/Percussionist Elijah Owings is as rock-solid as he is versatile, and when teamed with Bobby Wallace’s full-throttle bass, the rhythm section definitely equals more than the sum of its parts, locking down the songs and giving Venable’s guitar room to run.

With album opener “Nowhere To Hide,” Venable draws listeners in with a strutting groove and a lead break feisty enough to match her vocals. She stays feisty even on a done-me-wrong song like “Broken” that finds our hero heart-broken sure, but taking on her share of responsibility for letting a bad love continue to that ugly end she always saw coming. Her love-warrior spirit is fully back and intact for the title track. “Texas Honey” finds Venable clearing a space for herself and making her stand, with what will surely prove to be a career-defining track.

Guest Mike Zito brings his guitars (and back-up vocals) to the slow-swaying and regret-filled torch song “Blind To Bad Love.” Once again proving that a Texas girl doesn’t stay down for long, the badass-ery comes roaring back on “Come And Take It” with an assist from Eric Gales, who trades vocal and guitar lines with Ally in yet another powerful look at the complications of love powered by a relentless blues/rock rhythm. As if to prove that the guest guitars are all very nice, but no crutch, Venable and the band have their way with a cover Stevie Ray Vaughn’s “Love Struck Baby,” blasting joyfully through it, in all its honky-tonk glory.

Mike Zito’s deft slide guitar work returns on the brooding “One Sided Misunderstanding,” which, once again, finds our girl not knowing where she stands with a boy she clearly could do better than, as pain and confusion abound in the lyrics and lead runs. Next up “White Flag” is anything but a sonic surrender. Raucous and unrestrained, the fat power chords stomp out the rhythm heavy as a T-Rex fight while Venable throws down the verbal gauntlet and sneers her way through another take-no-prisoners solo. You can’t get more Texas Rock than “Long Way Home.” In what might be another career-defining track, this tune is clearly written to move a crowd in a live setting and be more-than-a-little radio friendly. Start the song off small before building, and then building some more, throw in a sing-along chorus and a spicy, reverb-drenched solo and you’ve got a tune big enough to fill arenas.

All this album-spanning sass, snark and sneer feels surprisingly legit in a player who is still so young, and is an important next step for any musician who is “discovered” at an extra-early age. If a player wants to have a career after they’ve outgrown their “young gun” hotshot guitar-slinger status, they better take the time to develop some song craft and songwriting chops and figure out what they really want to say. Cross Venable’s established tough-walkin’ Texas thing with the sly lyrical sense, sonic exploration and equally-earned snark of Liz Phair at her best, and you’ll get a gem like “Running After You.” With just a few tweaks of the EQ, this track would work anywhere from the sickest underground rave to the main stage at the Nebraska State Fair.

Venable closes Texas Honey strong by putting her own unique stamp on a classic that has been covered by everyone from Bessie Smith to Johnny Cash. “Careless Love” seems to be Ally’s homage to those musical giants, and to the fans who love them, many of whom are hoping like hell Venable’s the one who is going carry their music on.

She’s got it from here.

For more information about Texas Honey by Ally Venable: