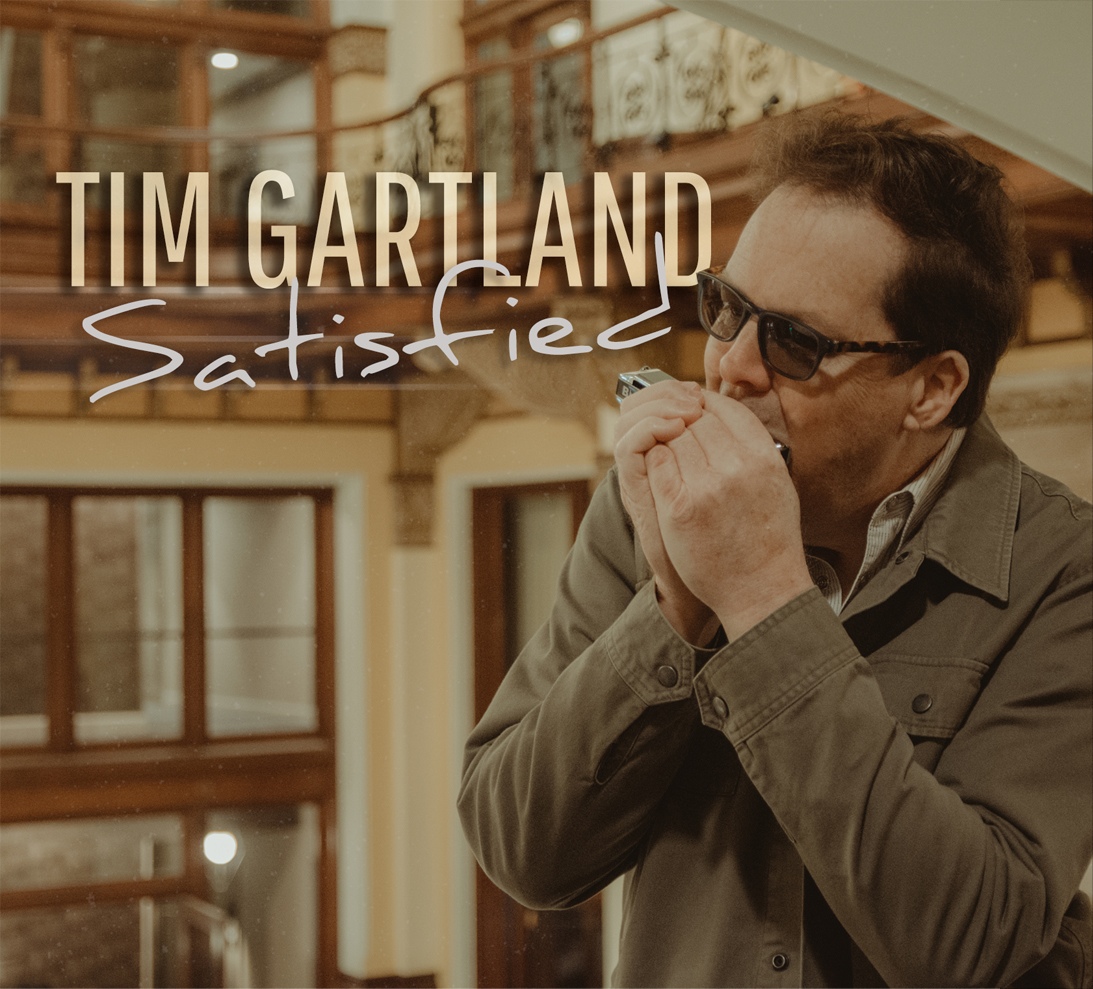 Harmonica heavyweight Tim Gartland will be releasing his fourth solo record Satisfied through his Taste Good Music label on April 12th. The ten-song collection of original songs is chock-full of his usual charm, humor, bottomless baritone vocals and, of course, immense harp chops.

As you can imagine, a guy who has climbed to the top of the blues scene in at least three cities of residence; Chicago, Boston and now Nashville, would have little trouble assembling a killer band to help him carry his new songs to the people. With drummer Jack Bruno (Tina Turner, Joe Cocker) and Steve Mackey (Wallflowers, Delbert McClinton) on bass, the rhythm section is dialed in from the get-go. Guitar duties are split between Tom Britt (Vince Gill, Jonell Mosser) and Robert Frahm (Blues Warriors) both sharpshooters who know how to inject some extra mojo wherever it is needed. The sound is filled out by keyboardists Tom West (Duke Robillard, Susan Tedeschi)  and Kevin McKendree (Brian Setzer) as well as some head-turning backing vocals by Wendy Moten.

Tim Gartland wastes no time setting the tone with opening track “Drinking for Two.” A good time, two-steppin’ tune about drinking away a bad break-up, told in his deep welcoming voice and commanding harmonica tone and style. He keeps the vibe light but makes the message a bit more serious on “Don’t Make More Trouble,” offering good advice on how to make this wobbly world a better place. Always generous, Gartland makes room for lead breaks from guitar and keyboard before he seals the deal with his harp on the run to the fade-out. “Blues for Free” is a lament both contemporary and older than the blues itself. Anchored by an organ riff that rolls under the whole affair, and elevated by some sweet backing vocals, this one manages to sound familiar and new at the same time. Honky tonk piano and a Chuck Berry shuffle power “Can’t Paint A Prettier Face,” a classic ode to that girl who can turn every head at the dance. Garland’s inventive lyrics fold like origami into this toe-tapper.

Landing in the middle of the album are perhaps the showcase tunes of the bunch. A timeless theme combined with a classic tempo and progression sets a clean table for Gartland’s warning to the potential heartbreaker standing before him in “You Best Think Twice.” This is followed by title track “Satisfied,” the most persuasive argument you’re going to hear for the simple life this year. Running through both songs his harmonica never fails to add to his message whether hopeful or melancholy. Expect to hear every blues singer, guitarist and/or harp player you love clamor to cover this pair of aces.

Tim Gartland and the band switch gears on the sly and slow “Walk On.” His harmonica cuts through the mix especially on this one as he explores his bottomless bag of harp tricks. His inventive songwriting, evident in the understated, almost conversational call-and-response chorus, adds to the already abundant charm. A buoyant reggae shuffle adds a dreamy quality to “Why Does the Room Begin to Sway.” The ode to the goddess spotted from across the bar will burrow deep in your ear thanks to the loose-but-tight keyboard flourishes and angelic backing vocals. In another lyrical tour de force, Gartland breaks your heart with a tale of good love gone bad in “Artifacts,” a full-on torch song that the entire band leans into, hard.

An unapologetic Gartland throws down the gauntlet on closing track “Don’t Judge Me.” With defiant lyrics for the haters but plenty of love and room for give-and-take between harmonica and guitar, this closer is a reminder to all that, in addition to his undisputed harp mastery, there is a formidable songwriting talent not-so-hidden behind that honey-smooth voice and all that easy charm.

For more information on Satisfied by Tim Gartland: