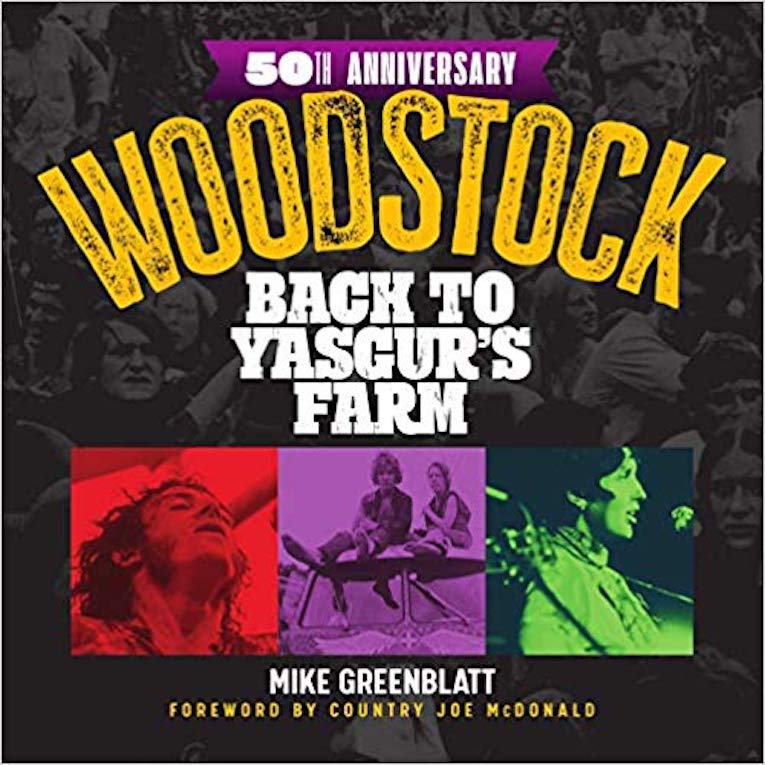 Celebrating “the greatest peaceful event in history,” Woodstock 50th Anniversary: Back to Yasgur’s Farm (Krause Publications) by Mike Greenblatt out July 1, 2019, offers a dazzling and compelling front-row seat to the most important concert in rock history, an implausible happening filled with trials and triumphs that defined a generation.

Author and Woodstock attendee Mike Greenblatt brilliantly captures the power of music’s greatest performers such as Jimi Hendrix, Janis Joplin, Joe Cocker, Santana and the Who, while sharing stories both personal and audacious from the crowd of a half million strong who embraced not only the music but each other.

The year was 1969. Richard Nixon was in the White House. Neil Armstrong was on the Moon. And revolution was in the air. In that backdrop, 500,000 young people gathered on a mid-August weekend in upstate New York for the promise of three days of peace and music. What they experienced at the Woodstock Music and Art Fair was something far greater.

The book published features a Foreword by Country Joe McDonald, whose rousing solo acoustic version of “The Fish Cheer/I-Feel-Like-I’m-Fixin’-To-Die Rag” was one of the most memorable performances at Woodstock. Readers will enjoy interviews with such rock icons as Graham Nash, Carlos Santana, Joe Cocker, Richie Havens, Country Joe McDonald, Edgar Winter, members of Jefferson Airplane, Creedence Clearwater Revival, Sly & The Family Stone, Canned Heat, Sha Na Na, co-host Chip Monck, fans and countless others. In addition, all 32 performances at the festival are showcased.

Equal parts circus and surreal, Woodstock 50th Anniversary: Back to Yasgur’s Farm tells a transcendent tale of a musical and mythical moment in time.

Advance Praise for Woodstock 50th Anniversary
“Straight from a long-haired hippie who experienced all that Woodstock had to offer — the beauty, the mud, the music and the cultural eccentricities — Mike Greenblatt has carried Woodstock deep within his soul ever since. Fifty years later, he writes with charming alacrity about that weekend, his memory on fire, lighting up the personal details of what occurred at this once-in-a-lifetime communal concert event.
— Pat Prince, editor, Goldmine magazine

“Mike Greenblatt’s long-awaited debut book on Woodstock— filled with his own hilarious memories and impressive interviews and research— is fascinating and dazzling. It’s definitely the definitive book on the wild festival fifty years ago that rocked America.”
— Susan Shapiro, New York Times bestselling author of Lighting Up, Unhooked and The Byline Bible

About The Author
All Mike Greenblatt has done in life is listen to music and tell people about it, be it as a New York City publicist, editor or freelance journalist. It’s been five decades of chronicling rock ’n’ roll in all of its permutations. Whether sitting front row at Woodstock, flying with Hank Williams, Jr. in his private jet, driving around the Jersey Shore with Bruce Springsteen, getting angrily thrown against a backstage wall by Meat Loaf, or being locked in a dressing room with Jerry Lee Lewis threatening to kill him, Greenblatt’s voice has sung the praises of rock loud and long.

Greenblatt has interviewed Elton John, the Eagles (where he extemporaneously interviewed Joe Walsh at side-by-side urinals deep within the bowels of Giants Stadium), Paul McCartney, Blondie, The Allman Brothers, Waylon Jennings and hundreds of others.

He lives in Easton, Penn., with his music-teacher wife and their two rescue beagles.

For more information about Woodstock 50thAnniversary and Mike Greeblatt: