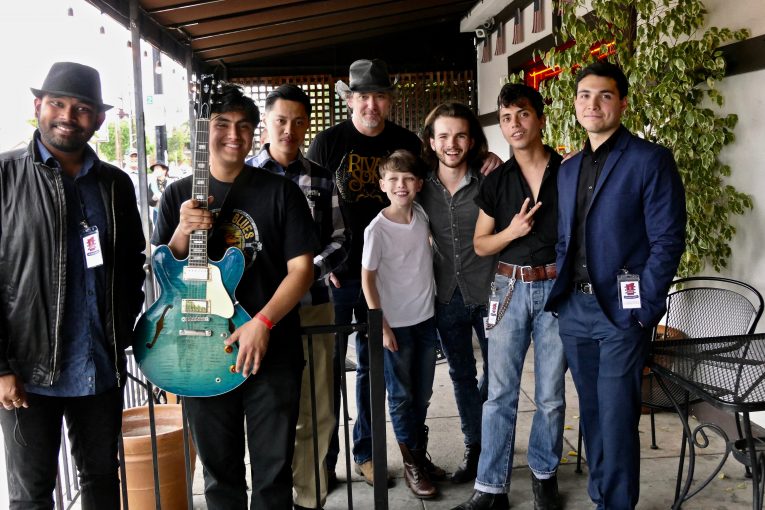 Ever been to a blues guitar competition? Neither had I. And guess what, it’s a blast. What an evening of fun the 6 String Showdown Blues Guitar Competition (regionals) turned out to be on Sunday, May 26th at Joe’s Great American Bar & Grill, Burbank, CA.

Presented by The New Blues Festival and Grandstand Jam, the 6 String Showdown Blues Guitar Competition, Season 2, L.A. County Regionals, featured 16 guitar players who competed for a new Tagima Stratocaster, cash and also the chance to battle it out against three other regional winners at the New Blues Festival, Sept 1st in Long Beach, CA with the hope of being crowned the Best Guitarist in Southern California.

What better way to spend a Sunday than watching talented guitarists, ranging in age from 12 (yes, 12) to middle age. It was a great way to support keeping the blues alive and the guitar players.

Joe’s Great American Bar & Grill was jam packed. The audience ranged from late teens and 20’s to upwards of 50. You don’t see that very often at blues shows. You also don’t often see young guys playing the blues. The blues is alive and well, I’d say. And if you doubted for a minute the health of the guitar in music, your faith would be restored by this event.

The gregarious MC, Kenny Williams, host of the Laguna Blues Show, kicked off the event by jamming on guitar with the house band on stage to give the audience examples of blues styles, from Chicago blues, slow blues to funky blues. He explained the rules, which included a life size colorful wheel front and center on stage, that once spun, determined blues style and key for each pair of competing guitar players.

Part of the excitement was that neither guitarist knew which blues style or key they would be playing in until they arrived on stage and spun the wheel. Winners were judged on 1/3 showmanship, 1/3 technical merit and 1/3 audience response.

First up were Andy Vimar and Jesse Ward. The wheel landed on Chicago blues in the key of E and they were off and running with the strong, supportive band to back them. Andy Vimar won the first round. Blessed with technique, style and a lot of soulful playing on his red Gibson 335, he almost made it to the end of the competition. 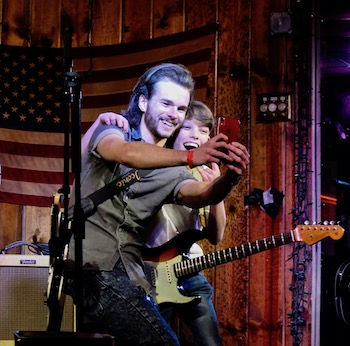 There’s always fascination with very young guitar players: Kyle, a 15-year-old guitar player who was pretty amazing for his young years, and a 12-year-old, Austin, who was so good he blew the doors off the place. Austin’s mother happened to be seated near us and when asked how long he’d been playing guitar, she said two years. When a 12-year-old has the tone and feel of a much older, more experienced player and learned how to do that in two years, you know something else is going on with that young-old soul.

Punctuated with humor, Kenny Williams engaged the competing players in conversation on stage. The colorful wheel was spun again and it landed on slow blues in the key of C. Austin competed against Ryder Green, a 20-year-old killer player with more than his share of tone, feel and melodic blues licks. Ryder won that round. By the end of the set, he and Austin (nearly half his height) were best buddies, and honestly, Austin seemed to be having the time of his life.

Among the other uber-talented players were Ambarish Nag who told me that he’d moved here from India to attend The Musician’s Institute, his graduation being next month. When I asked him how he’d gotten into the blues, he confessed that he’d listened to Buddy Guy, B.B. King, and Eric Clapton since he was a child. With outstanding guitar chops, Ambarish won a few more rounds and eventually lost out to Ryder Green.

A few of the rising stars who made it to the last segment were Eric Shen, Andy Vimar, Ryder Green, and Johnny Agundez. To watch all of them perform, backed by the band, was a real treat. No matter what style or key was called out (a lot of slow blues in different keys, as the day would have it) they tore up that stage. To be 20 years old, or thereabouts, and hold their own against some real quality players, while still enjoying themselves, was fun, if not inspiring to watch.

David Dot Hale, executive director of the 6 String Showdown and also of Blind Lemon Peel fame, responded to everyone’s good natured groans about the spinning wheel repeatedly falling on slow blues. He explained the integrity of the show and that it wouldn’t be fair to the contestants to change the circus-like wheel to land more frequently on other styles. Frankly, I don’t think anybody cared. It was just exciting to see young and older guitar players with great skills and spontaneity perform in an atmosphere of competition.

It was all in good fun and the bottom line was keeping the blues alive and supporting the guitar players. The competition could have had a very different feel and tone if not for David Hale, media director Rick Snyder, MC Kenny Williams, stage manager Stoney Gurrola, and volunteer coordinator, Adrianne Harwell. The energy in the room was of excitement and everyone pulling for the players. Not one negative comment in the whole four hours.

The next segment featured Andy Vimar and Eric Shen in the ring. Fantastic, both of them. And because they tied, Williams announced a “Sudden Death” competition between the two in the style of funky blues. The contestants’ parents and friends now closed in on the stage, dancing and jumping up and down.

Johnny Agundez, also a young twenty-something, playing an ocean blue Gibson 335, had great guitar chops and a sense of true showmanship. He seemed to love performing, and the crowd. He kept winning against other talented players, a smile on his face every single time. 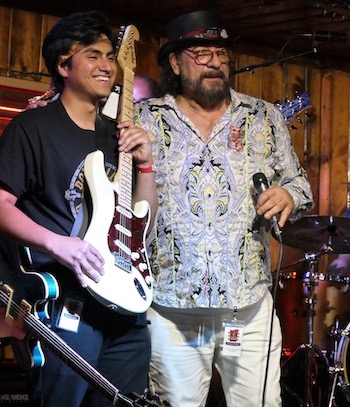 The final round was Johnny Agundez and Eric Shen, with Agundez taking the prize. The room flooded with whoops and hollers. Agundez was presented with a new Strat by Williams, and his promise to interview him, Eric Shen and more on his radio show. Agundez goes on to compete against the other three Southern California regional winners at the New Blues Festival in Long Beach, CA.

If you haven’t attended one of these guitar competitions, I encourage you to do so. Check the schedule for the 6 String Showdown Blues Guitar Competition and get yourself to one of the final events. You won’t regret it.