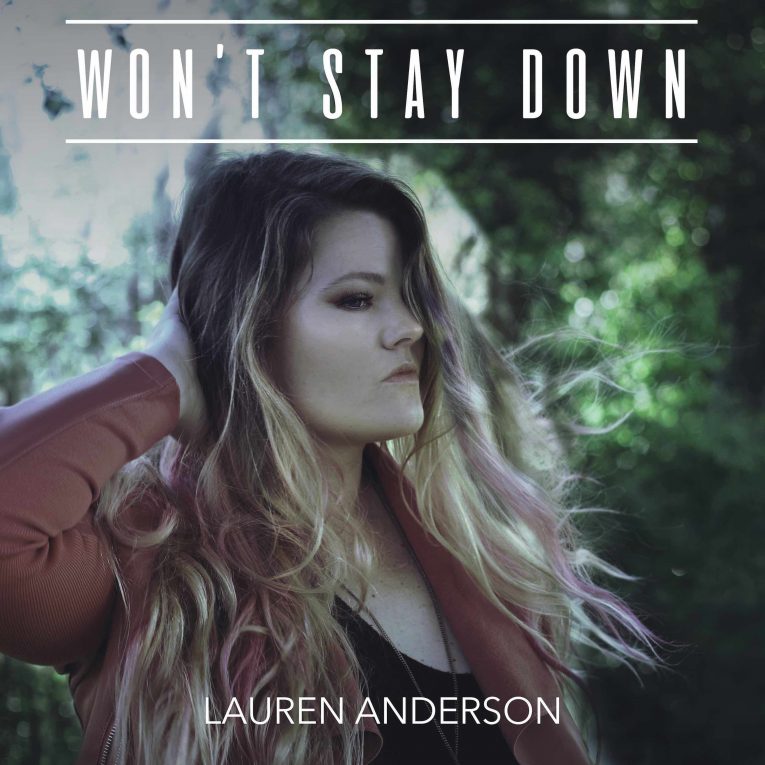 Lauren Anderson had recently returned home from a trip to Los Angeles, a trip involving meetings with music industry executives, vocal rehearsals, record contracts, and ultimately a whole lot of empty promises, when she began writing songs for her third EP, Won’t Stay Down. She’d been playing shows since 2014, mixing her blues-rock roots with elements of Americana, soul, and country music. She loved the work, but she’d grown frustrated with the industry, particularly the demands thrust upon her as a female artist. Back in her adopted hometown of Nashville, she started writing new material about strength, endurance, and female empowerment, drawing on her own artistic journey for inspiration and gluing everything together with her bluesy belt of a voice.

Anderson first started playing music back in the Midwest. Raised in Chicago, she began taking lessons at an early age, starting with piano as an 8-year-old and followed by classical voice lessons as a teenager. A member of several choirs, she brought her love of singing to college, where she eventually landed a master’s degree in Music Therapy from the University of Kansas. The goal was to turn her own musical appreciation into something charitable, something that could help others, and she furthered that goal by playing her own shows as a solo artist, bringing her music to as wide an audience as possible.

Her audience grew steadily over the years, from the 2014 release of Anderson’s debut EP, Do & Hope, through 2015’s full-length Truly Me and 2017’s The Game EP. Along the way, she earned a handful of accolades. including being named the 2015 Female Vocalist of the Year by the Midwest Music Awards, as well as a first-place finish in the 2018 Wing Dang Doodle Competition, and proudly watched The Game crack the Top 50 of the Billboard Blues chart for five weeks straight. After moving to Nashville in early 2017, she established herself as one of the city’s beloved blues musicians, with a monthly residency at the Bourbon Street Blues and Boogie Bar and a handful of gigs across the Bible Belt.

With Won’t Stay Down, Anderson stakes her claim as an ever-evolving songwriter whose music modernizes and reinterprets the bluesy, boundary-breaking females who came before her. On “Cake,” she turns the 12-bar blues format on its head, lacing the arrangement with blasts of brass and funky guitar. “I wanna my rock & roll career, I want my Hollywood premiere,” she sings, making no apologies for the desires of a road warrior who’s paid her dues and has come to collect. On the soulful title track, she refuses to be silenced, howling her melodies alongside a mix of organ and fiery fretwork. “You can push and pull me,” she taunts the world at large, refusing to let it get the best of her. The EP closes with the triumphant boogie rock of “Wild and Free,” where Anderson celebrates the thrill of feeling unrestrained and unlimited.

Written and largely self-produced by Anderson, Won’t Stay Down is a battlecry from a songwriter whose supersized voice and sharp, personal songwriting have reached a high-water mark. With one foot planted in the territory of her influences and the other pointed in an unexplored direction, she straddles the border between blues, soul, and guitar-driven rock & roll, finding her own sound somewhere in the middle.