Review: The Allman Betts Band Down To The River 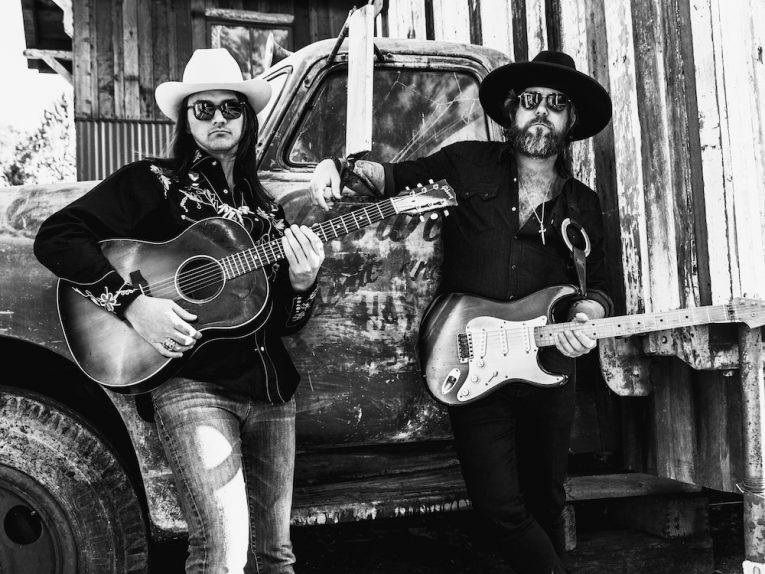 By Mike O’Cull
The Allman Betts Band is proof that sometimes blood lines matter. Centered around the progeny of three original members of The Allman Brothers Band, the group’s powerful debut album Down To The River, which greets the world June 28th, 2019 on the BMG imprint, is arguably the first record of modern Southern Rock ever released. This isn’t just another bunch of long-haired guys mixing blues, rock, and country influences. Instead, it’s a new sound built on the genre’s original foundation and the DNA that created it. The Allman Betts Band writes songs we haven’t heard before, infused with the drive and spirit of the 21st Century. The group picks up where the Allman Brothers left off, sets its own course, and makes fresh, new music that can barely contain the music and emotion flowing through its veins.

Devon Allman (guitar, vocals) and Duane Betts (guitar, vocals) are the sons of Gregg Allman and Dickey Betts, respectively, and they began their partnership at the Gregg Allman tribute concert at The Fillmore in San Francisco. The night was a passing of the torch to a new generation and a sign that it was time to make something new out of the lessons from the past.

Putting producer Matt Ross-Spang (Jason Isbell, Margo Price, John Prine) at the helm, the band recorded at the famed Muscle Shoals Sound Studios in Alabama the real way. The Allman Betts Band tracked nine songs live, as a unit, to two-inch analog tape. No computers or digital editing were employed. As a result, this debut effort is packed with cohesive performances, outstanding tones, and the feel that only comes from humans playing together in a room. Like the great records of the past, each track captures the sound of something actually happening, not the sound of an audio sculpture crafted in binary code.

On top of all of this, the songwriting on Down To The River is uniformly excellent. From the live count-off of the opening track “All Night,” listeners are treated to a combination of energy, human touch, and tight compositional skills. Melodies rule the day, dynamics ebb and flow, and every second of music means something. “Shinin’” features the kind of twin guitar harmonies that were such a huge part of the Allman Brothers sound but goes its own way as a song, and grooves on its own pocket. It’s the kind of song Gregg and Duane might write if they were young men in the present day.

The title track, “Down To The River,” is moody, slinky, and shows that Allman Betts can handle soulful, low-key vibes just as well as the up and rocking material. Devon’s vocals carry the same weight as his father’s did and he knows how to lean back and let the song do the talking. “Autumn Breeze” contains a bit of gentle psychedelia, more beautiful guitar harmonies, and a natural-feeling build of intensity over it’s more than eight-minute length. The band expands and contracts wonderfully before winding up in the same delicate headspace in which it began.

One of the album’s most transcendent and unexpected moments is the piano, vocal, and slide guitar cover of Tom Petty’s “Southern Accents.” The song is a quiet meditation on what it means to be a Southerner and is especially moving in these hands. It adds the kind of outside context to the record that didn’t exist in the original Allman period. It took 20 years of distance from that time for Petty to write it and now, 30 years since then, it delivers the kind of emotive knockout punch thrown by icons like Hank Williams, Tom Waits, and Johnny Cash. Including it here is a stroke of brilliance.

The Allman Betts Band is the next-generation real deal. Most acts trying to do this style now come off like tribute bands but these players have it in them from the chromosomes up. It’s what allows Allman, Betts, and Oakley to grow and stretch Southern Rock into today’s world in a way that’s authentic and personal.

Music at this level is about a lot more than playing and singing. Intention, spirit, and non-verbal understanding are crucial to making a band like this matter. The Allman Betts Band is in a unique position right now with BMG behind it to touch enough people with this music to change the landscape of the global music scene for the better. Down To The River is the best rock album thus far in 2019 and has the potential to be a game-changer. Highly recommended.