Review: Gov’t Mule ‘Bring On The Music Live At The Capitol Theater’ 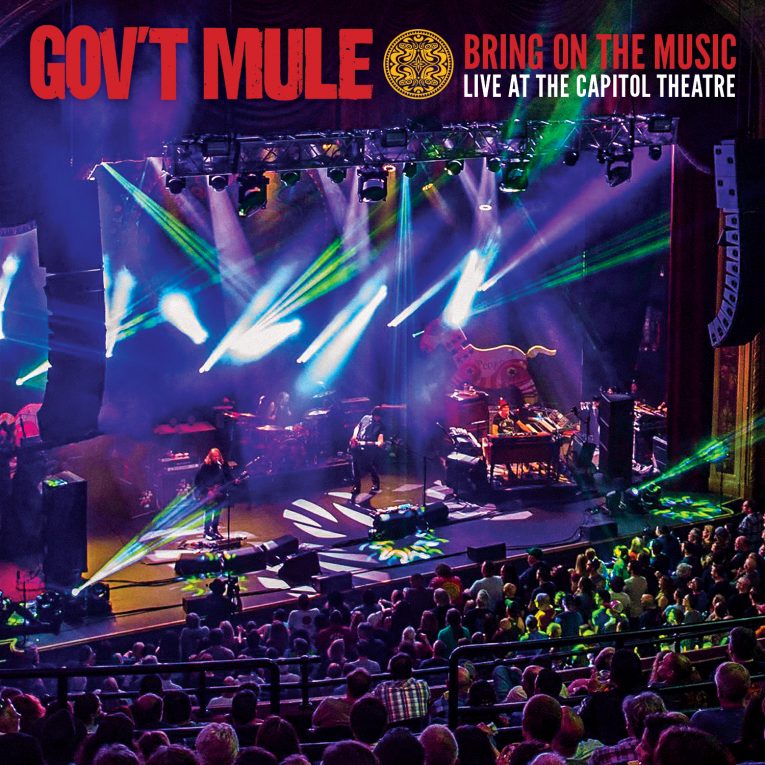 By Mike O’Cull
Jam band extraordinaire Gov’t Mule has a brand new live album called Bring On The Music – Live at The Capitol Theater dropping June 28th, 2019 via Provogue / Mascot Label Group that does an outstanding job of capturing the vibe and energy that’s kept the band near the top of the hippie heap for so long. Recorded at The Capitol Theatre in Port Chester, NY, on April 27th and 28th, 2018, Bring On The Music finds The Mule in top form on a stage that has given the group many amazing nights over the years. The set will be available in differing formats, including CD, vinyl, digital, and DVD, which will be released July 19, 2019. Of course, the packages all contain unique track listings from each other, so please keep in mind that we’re discussing the double CD set here today.

These four comprise a muscular, flexible unit that’s dynamic, groove-obsessed, and able to command any stage with authority. Haynes has also been part of The Allman Brothers Band and The Dead, which gives him all the jam cred it’s possible to amass and he displays the type of skill and passion here that have made him loom large over the American rock scene.

Bring On The Music opens with a moody reggae take on The Staple Singers’ “Hammer and Nails” that steadily increases in intensity and focus as it unfolds. Haynes swings hard for the fences with dramatic performances on both vocals and slide guitar and the rest of the band matches him step for step. Gov’t Mule staple “Thorazine Shuffle” follows and raises the rock quotient considerably, contrasting light and heavy sections like an American Led Zeppelin with a Southern flavor. The whole band expands itself during the instrumental bits, then contracts back beneath Haynes’ voice and Uni-Vibe-drenched chord fills. Danny Louis also shines here with an energetic synthesizer solo.

“Broke Down on the Brazos” is more riff-heavy rock that will hit you right in the chest. The bass and drum groove absolutely kills and Haynes just keeps unwinding his practically limitless guitar vocabulary. He is one of the finest soloists playing today with a highly-developed sense of phrasing that never requires over-the-top shred tactics to maintain interest. He also gets some of the best Gibson guitar tones in recent memory all the way through these tracks and they will make even hardcore Fender fanatics want a Les Paul.

“Endless Parade” gives fans a taste of the mellow, bluesy side of the band and gets an immediate response from the crowd. Haynes’ vocals are laid-back and soulful and his downtempo soloing on the back half of the song is especially sweet. There’s also some conversational guitar and piano interplay during these moments that’s enjoyable and unpredictable. The crowd can be heard shouting encouragement to the band during these quieter times and it’s obvious they were hanging on every note. You will, too.

By the time they get to “Trane > Eternity’s Breath > St. Stephen Jam,” The Mule is flying high and fully warmed up. The group is playing like one single person by this point in the night and the musician’s close-knit musical kinship is powerful enough to sweep you away. Outside jazz-ery gives way to rock and then to Southern soul, only to heat right back up again. It’s the kind of experience no computer could match and shows how culturally relevant and human live music can still be.

The title track, “Bring On The Music,” closes out the record in a thoughtful way, with its introspective lyrics and a chorus that evokes the concert ritual and the connection between musicians and fans. Gov’t Mule digs in to leave all it has out on the stage and Haynes gives himself to the audience fully, finishing the track with a Zen-like emptiness in which nothing more needs to be said.

Bring On The Music is an absolutely exhilarating set of live music by one of rock’s most capable and resilient bands. Gov’t Mule puts a harder edge on the jam band sound than the Allmans or Dead and owns its turf in that scene like a boss. Dial this up in your headphones and your attitude will adjust itself.

Pre-order link for Bring On The Music-Live At The Capital Theater by Gov’t Mule.