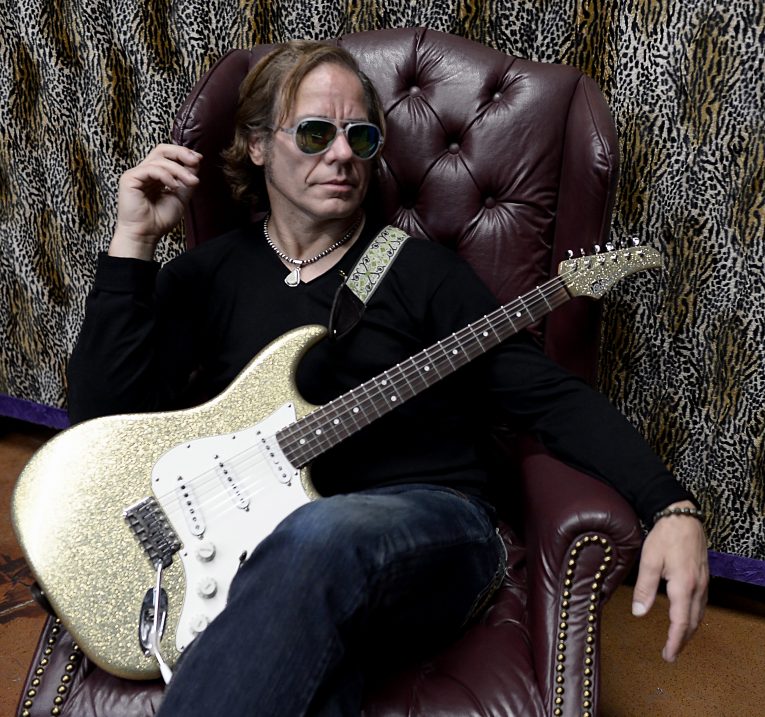 There is no shortage of outstanding blues-rock guitarists out of Texas, and guitar slinger, singer-songwriter Chris Duarte is no exception. He blew away an audience at the South X Southwest convention in the early 1990s and rose to public consciousness as a gifted guitarist with a sound comparable to Stevie Ray Vaughn. Yet Duarte is a student and master of many musical genres that goes far beyond blues rock, mixing in punk, jazz, and metal. He calls it “ferocious blues” or “punk blues.”

The legendary Duarte is called a road warrior as he plays more than 150 dates a year and has headlined major festivals and clubs throughout the US, Canada and Europe. He is constantly evolving as an artist and none of his live shows are alike. With a catalog of 15 albums, he has no lack of material to draw from. Duarte is also known as a sorcerer of tone, a master at channeling sounds of great musicians of our past, but his own sound is completely recognizable. Duarte was kind enough to talk to us by telephone.

Kevin Porter: Tell me how you got into playing guitar. I understand it was by seeing “Fiddler on the Roof.”

Chris Duarte: When I was a kid, on TV, it was like the network debut of “Fiddler on the Roof,” and to tell you the truth, I’ve told this story so many times, I don’t know if it’s evolved, but these are the things I remember. There’s this one scene where the fiddler is silhouetted on the roof, and he scrapes out that “Fiddler on the Roof” theme. It just hit me that this is so awesome and it’s so cool. I held onto that until school started later on that year. I wanted to get in the band, and I went up to the front and I said, “I want to play violin.” And they said, “No, we have too many violin players, try clarinet.” I went back home and told my mom about what they said. My mom, a musical student, started imitating these annoying lines that a clarinet can sound like, and she said, “No, you’re not doing clarinet. Forget it.” But, as the story goes, the seed had been planted. I wanted to do something in music. My older brother had a guitar, and I was constantly picking it up. My mom bought me a guitar, and the rest is history.

CD: Yes. With the Beatles songbooks, it was pretty easy. The chords were right over the lyrics or the words, so I put it together that this is where the chord changes are made. You play the chord right here when you sing this line. It just made sense to me.

KP: Tell me about some of your early influences or inspirations as you were learning to play. Some of the reading I did about you, you seemed like you had a lot of influences. You had the blues, you had some prog rock stuff. What inspired you early on?

CD: Well, in the beginning, of course, it was the Beatles. As my tastes evolved, I started to listen to Black Sabbath and metal. That kind of took over for a while. When I started playing in bands, the bands that were playing around town were quasi-blues bands. These were bands that had metal influences, but they still kept their blues influences. We sort of developed a sound listening to Howlin’ Wolf, Muddy and all of those cats. Before we knew it, we were pretty much a blues band. I could pick out all of the metal stuff, and I could sound pretty good. But when I started picking out all the blues stuff, I didn’t sound so great. I just started working on it. I’d play a Black Sabbath album and say, “Yeah, I got this. I got this.”  And then I’d play Muddy Waters and say, “I don’t sound anything like what’s coming off the record. And, I’ve got to work on this.” I had to really work at it. I wish it came naturally to me. Very few things came naturally to me when it came to playing blues.

KP: I was really struck when you said that some of the old jazz guys like John Coltrane, Charlie Parker were influences. Tell me how the early old jazz guys influenced your playing.

CD: It’s just their dedication to the instrument, dedication to yourself, and dedication towards your sound. Their dedication to finding a higher level of playing…to being that unique voice out there. That’s what I have always strived for. I think a large part of music has a psychological and philosophical part to it. It is nirvana that you are trying to reach. There’s a lot of cats out there that are just fine with mowing the lawn, so to speak. But that’s not what I’m here to do. I’m here to try and further my craft and to try to play better than I did the night before. That’s what gives me solace because I’m still out there trying to get better. That’s my goal in life, not just to get better and better, but to have more peace with myself for my accomplishments and my efforts toward reaching that nirvana in music.

KP: I know you tour a lot. What do you like most about playing live?

CD: It’s the spontaneity of it. The look on people’s faces when you’ve managed to pull something off that you didn’t even think that you were going to be able to do. That’s where all those years of practicing and working on those mundane exercises pay off. People are looking at you in awe—”God, did you just hear that?” You can’t help but sort of be happy with yourself or proud that you pulled off that musical moment. You’re connecting with people too, and that’s an unbelievable thing. When people say, “I was having the worst day of my life and I came in and heard you play and it was so unbelievable. I can’t believe that you moved me so much in the last hour or so, and everything is right now in the world.”  You gave them happiness. You made them search out for something, and you changed their life even if just for a few seconds. That’s unbelievable to me—I’ve walked into strangers’ lives and changed their lives for just a few moments.

KP: Looking at your Facebook page, I see you do a fair number of house shows, and that you ask your fans to find you places to play, do house concerts, what have you. Tell me about that. It must be pretty gratifying to have fans arrange concerts for you.

CD: I think what it is, I mean besides the fact that “oh, this is so cool, I’ve got Chris Duarte here in my living room,” it’s the thought that somebody would offer me up like that to their friends is high praise, indeed. I take it as high praise. I want a great experience for him and his friends. Every experience is a little different, but that’s how I approach it.

KP: From a business perspective, it fills in some open dates, too.

CD: Exactly. If we can fill in the shows here and there, and the money looks pretty good, I’m totally down with it.

KP: So, your last record was The Fan Club? Are you working on a new one at the moment?

CD:  I’m sort of gathering songs here and there. I’m working on new material with this singer-songwriter named Beth Lee, and I’ve been playing her gigs as well. It’s a big challenge for me because it’s a totally different beast, and I’m finally starting to get a handle on some of the songs.

KP: Are you trying to write with her or think of songs for her? How are you approaching that?

CD: Yeah, all of the above. I know it sounds cliché-ish, but yeah, I want to try and write love songs, you know, with or without her. Just what the world needs, more love songs.

KP: Well, McCartney would say that.

CD: (Laughs) exactly. I think if I have that formula or that ability to write a love song as good as Paul McCartney, then I will take it.

KP: Other than gathering songs for your next record, what’s on the horizon for you? I know you’ve got another tour coming up. Anything else?

CD:  Playing live is what I love to do. I just want to keep playing in front of people and honing my skills. And, of course, it takes a long time.

KP: Well, I mean, you get a little better every day, right?

CD: That’s the gist of it. I want to keep getting better.

KP: Well, Chris, I really appreciate you taking the time. And, I certainly wish you all the best with your upcoming tour and the songs you’re working on.

CD: Okay, sounds cool, man. Thank you so much, Kevin.

For more information on Chris Duarte: