Review: Toronzo Cannon ‘The Preacher, The Politician, Or The Pimp 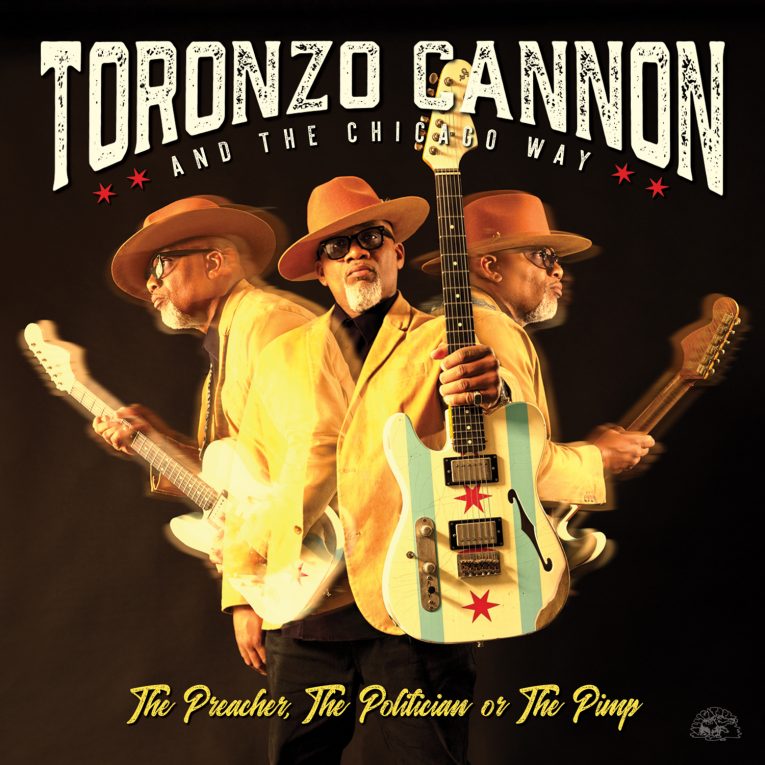 Chicago’s Toronzo Cannon, a smoking hot guitarist, vocalist, songwriter, and city bus driver, has a brand new record called The Preacher, The Politician Or The Pimp that emerges September 20th, 2019 on Alligator Records. Cannon is a longtime part of the Chicago blues community who has risen through the ranks of the always-competitive Windy City circuit over the past twenty-odd years. Cannon is one of the best songwriters working in roots music today and has a talent for writing compelling new material that speaks to modern listeners about modern topics that still rocks the house. The Preacher, The Politician Or The Pimp is his most powerful effort to date and is a definitive statement about what the term “contemporary blues” actually means.

Cannon was born in Chicago in 1968, and grew up in the shadows of the notoriously tough Robert Taylor Homes housing projects. He began soaking up the blues as a kid standing on the sidewalk outside of the now-legendary Theresa’s Lounge and was too young to get in to catch stars like Buddy Guy and Junior Wells who played there. He began playing guitar at age 22, soon discovering his natural talent on the instrument. He started with reggae but was soon drawn back to the blues. He soaked himself in the music of Buddy Guy, Albert Collins, Hound Dog Taylor, B.B. King, Albert King, Freddie King, Jimi Hendrix, J.B. Hutto, and Lil’ Ed and forged a muscular guitar style that was his, alone. From 1996 through 2002, Cannon played as a sideman for Tommy McCracken, Wayne Baker Brooks, L.V. Banks, and Joanna Connor, becoming a full-time solo artist in 2003.

Toronzo comes out swinging from the jump on The Preacher, The Politician Or The Pimp, starting the party with the intense “Get Together Or Get Apart.” It’s a tough-minded track about love gone wrong and immediately treats listeners to Cannon’s screaming guitar licks. His manner of phrasing is highly individualistic and Cannon isn’t shy about playing things his own way. Too many blues players fall short of putting their own stamp on the language of the genre but Cannon quickly asserts and keeps his own musical identity.

The title song, “The Preacher, The Politician Or The Pimp,” is a big helping of biting social commentary wrapped up in a track heavily influenced by the sounds of vintage soul music. Cannon’s lyrics call out the three characters named in the song, asking hard questions and giving uneasy answers. He acknowledges that all three are one and the same, each one selling dreams for money most folks don’t have to give. This is the kind of song the blues world needs more of, the kind that expresses the realities of life in these times. Cannon doesn’t cling to the vocabulary and sentiments of the post-WWII world, which blues purists are sometimes too fond of. Instead, he speaks to the audience directly in front of him and delivers a cut full of wisdom and social relevance.

“Insurance” is a Jimmy Reed-type shuffle about the realities of obtaining health care in the USA. Again, Cannon takes on a relevant topic that gives a lot of modern music fans the real-life blues. The groove is subdued but the lyrics hit hard and will resonate with a wide swath of people. Also, Cannon becomes perhaps the only bluesman in history to write a song containing the word “colonoscopy,” which really catches one by surprise the first time through. “Stop Me When I’m Lying” is a humorous song about some of life’s truths discussed over a great New Orleans groove. Cannon is just as strong a songwriter and vocalist as he is a guitarist and his balancing of his gifts is what makes this song and the entire album a cut above.

The MLK-inspired “The Silence Of My Friends” uses a sanctified gospel feel to confront the questionable people in our lives and hits the mark dead on. Toronzo turns in some beautiful, restrained lead guitar here but the force of this one is his message that silence only helps evil to grow. He puts forth some real Truth on this song and also shows us the smoother side of his vocal style. “Ordinary Woman” is an upbeat, jazz-inflected minor key shuffle with excellent lyrics and some fine piano work from Roosevelt Purifoy, who plays piano and organ on the entire album. Other high-impact moments on this set include “The First 24” and the gut-punching final track “I’m Not Scared,” which bravely deals with the issue of domestic violence.

Toronzo Cannon is an amazing guitar player who teaches us again that blues music is about the words and stories it communicates much more than it is about endless soloing. His songs are the stars on The Preacher, The Politician Or The Pimp, even though his guitar skills are as good or better than anyone out there. Cannon is the total package as a musician and never loses sight of the big picture.

Is this the best blues record of 2019? Quite possibly.

For more information on The Preacher, The Politician or The Pimp by Toronzo Cannon: