Review: Giles Robson ‘Don’t Give Up On The Blues’ 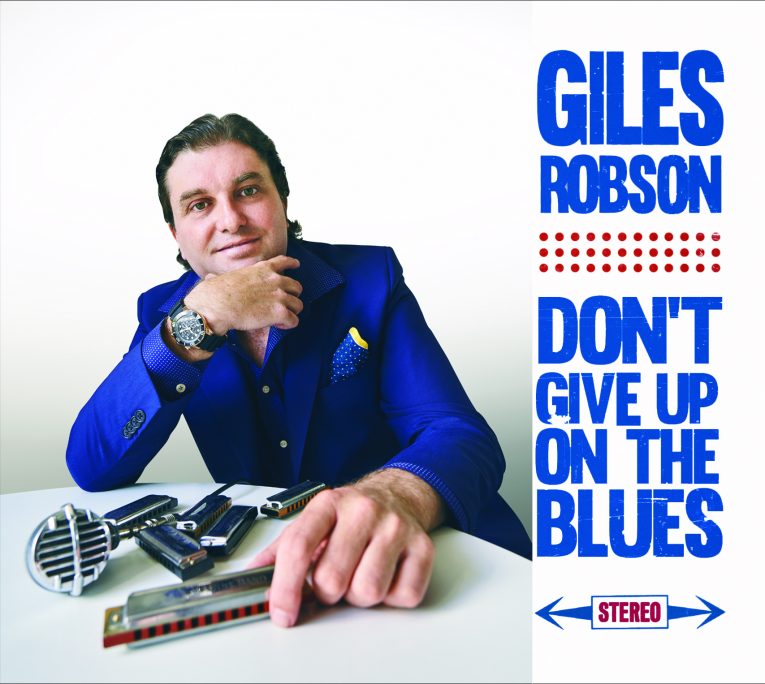 UK blues harp star Giles Robson makes his US recording debut with his new album Don’t Give Up On The Blues, which hits the ground on this side of the pond September 20th, 2019 on the American Showplace Music label. Robson is a Blues Music Award-winning artist who is widely considered to be one of the finest living blues harmonica specialists. He’s only the third UK artist to win a BMA, the other two being Eric Clapton and Peter Green. Robson has become a headliner in Russia, Spain, France, Italy, and everywhere else European fans love great blues music.

Don’t Give Up On The Blues marks Robson’s entry into the American music scene as a solo artist and he clearly means to have his way with it. Backed by BMA-winning keyboardist Bruce Katz and his blistering band, the record is a collection of 12 roof-raising original tracks that walk an entertaining line between classic and contemporary blues. Katz, Robson, and Ben Elliott co-produced and did an excellent job capturing Robson’s live vibe and roadhouse warrior presence. The tracks all groove hard and are full of many freewheeling, unforced performances from everyone involved. All of the musicians put their own modern energy underneath the timeless influences they’re invoking and the end product is an outstanding blues record without any dead spots.

“Land To Land” opens the record with a strong signature riff shared by Robson and guitarist Aaron Lieberman and a tough medium-speed pocket. From the first notes he blows, Robson becomes part of that pocket with the band rather than floating on top of it like many other harp players do. It makes all the difference. Whether riffing or soloing, Robson stands tall in the groove and plays off of the others in the most wonderful way. His vocals are gruff and engaging and suit his style well. The track simply works and Robson keeps turning this deceptively simple-sounding trick throughout the album.

The title track, “Don’t Give Up On The Blues,” is a crisp rumpty-rump shuffle that affords Robson some space to stretch and develop his licks while lyrically preaching on the healing power of this music. Katz’s pumping piano really propels the song and serves as a good textural contrast to Robson’s fat harp sound. “Damn Fool Way” is a tom tom-driven Bo Diddley beat topped with lyrics telling the story of a repentant man who knows he lost his love by acting the fool. It’s an emotive and hypnotic song and Robson turns in some of his best playing on it.

“Fearless Leaders” is a low-down slow blues that offers some hard-nosed social commentary along with the music and Robson handles it well, wondering out loud if it’s us or those in charge who are the bigger fools. Expressing these kinds of present-day sentiments does much to keep the blues relevant, prevents it from becoming “museum music,” and should be encouraged. It keeps the blues off of life support in a much more profound way than rewriting fifty-year-old songs ever will. Other can’t-miss cuts include the funky “Hey, Hey Now” and the epic slow-burn closing song “Way Past Midnight.”

Giles Robson is a huge talent whose reputation will only grow in the next few years. He has a gorgeous harp tone, an individual style, and writes better songs than many of his peers. Blues fans should expect to hear a lot about him in the near future because Don’t Give Up On The Blues is going to kick open some doors.

For more information on Giles Robson: