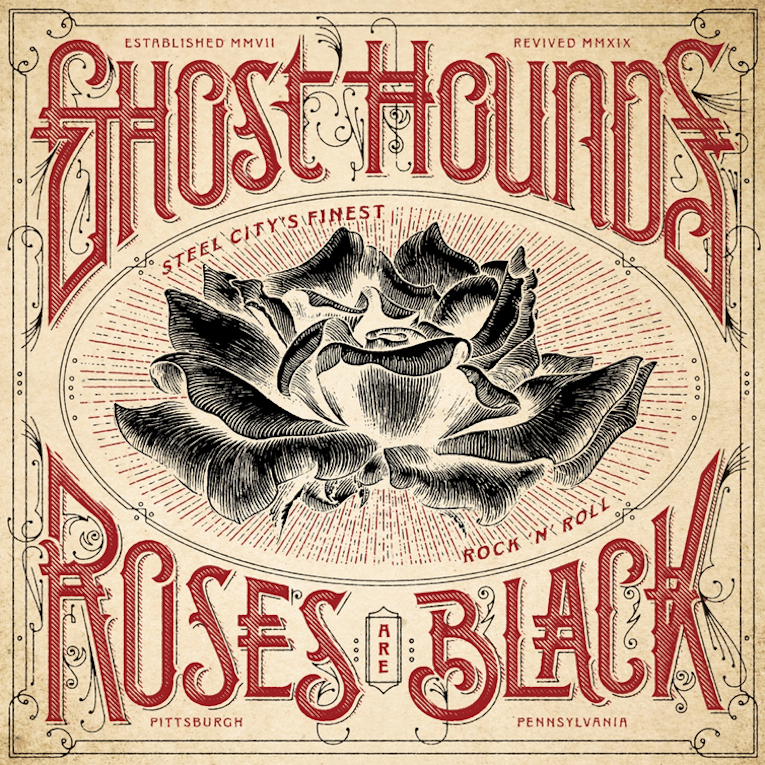 The band is on tour with ZZ Top this month and will play Bob Seger’s final performance November 1st.

On the heels of an opening performance with the Rolling Stones this summer, and the announcement of upcoming performances with ZZ Top and Bob Seger, Pittsburgh rock band GHOST HOUNDS has announced details of ‘Roses Are Black,’ their new album out November 5th, 2019.

Watch The Band’s Live Performance Video of “Fire Under Water.”

Ghost Hounds is a rock ‘n’ roll band at a time when the world needs more of them. The band’s new album recalls the universal appeal of rock’s ‘70s heyday, but with a fresh, crackling energy crafted by Tull, and voiced with fluid power by vocalist Tre’ Nation. The band’s gritty sound reflects the blue-collar heritage of its hometown of Pittsburgh; a versatile outfit whose music fits in an Iron City barroom or a stadium — such as the one in Maryland where Ghost Hounds opened for the Rolling Stones in July. There’s plenty of energy and rock ‘n’ roll abandon, along with tight playing and intricate songcraft.

“I think it’s a direct reflection of my own eclectic music tastes,” Tull says. “The Rolling Stones are my favorite band of all time, so a lot of this is inspired by the Stones. They fell in love with American blues. They have great country songs. Those things all appealed to me. Having all those different voices is important, and that’s what I want our band to have too.”

‘Roses Are Black’ certainly celebrates that diversity across its 12 tracks. “Bad News” spreads the good word of Ghost Hounds’ return by throttling up into some 12-bar fury, echoed later on in “Push That Rock Up the Hill” and “We Roll Hard.” “Skin in the Game” reflects that Stones love Tull speaks of, while “Black Rose” and “Fire Under Water” are classic rock tunes and “Almost Loved You” would sound at home in Nashville’s Bluebird Cafe. The group’s softer and soulful side is just as potent on tracks such as “When Your Shadow Touches Mine,” “Til It’s Gone” and “Second Time Around,” and Ghost Hounds’ treatment of “Devil Woman” shoots the Cliff Richards’ original through with high-test adrenaline, including biting guitar solos.

‘Roses Are Black’ represents an exciting new chapter in Ghost Hounds’ nearly 15-year story. Tull initially formed the band during the mid-2000s in Los Angeles, releasing a self-titled, Nile Rodgers-produced album in 2009. The group disbanded as Tull’s focus shifted elsewhere — starting a family and guiding his Legendary Entertainment to success with films such as the Christopher Nolan/Christian Bale Batman trilogy, the “Jurassic World” series, “Straight Outta Compton,” “The Hangover” and many more, along with comics, digital media and other ventures. But after selling Legendary in 2016, Tull still had the desire to, in the words of one of his songs, “push that old rock (and roll) back up the hill.”

As the release of ‘Roses Are Black’ approaches, Ghost Hounds’ new lineup – Tull, guitarist Johnny Baab, bassist Bennett Miller, drummer Blaise Lanzetta and powerhouse vocalist Tre Nation – are looking forward to making their case back on the road. “All of these songs to me just come alive in the band’s performance,” Tull says. “We tracked every song live, and we wanted this to be, in some ways, an old-fashioned record, where you can listen to the record and then go hear the band and say, ‘Yeah, that’s the song I heard.’ There’s nothing we can’t pull off live.”