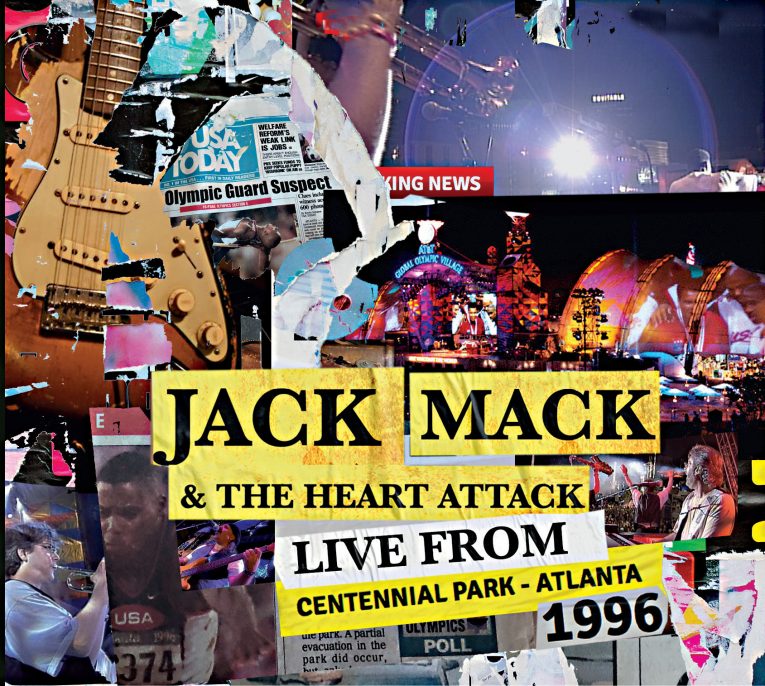 Jack Mack & The Heart Attack’s new live album, Live From Centennial Park – Atlanta 1996, documents the most famous/infamous set the high-energy soul band has ever played in its 40 year history. Released December 6th, 2019 on SSR Free Roll Records, the record brings to life the 11-song set Jack Mack played at the 1996 Olympics in Atlanta, Georgia that was cut short by the explosion of a pipe bomb in an act of domestic terrorism captured on live TV.

The album is released in conjunction with the new film Richard Jewell from director Clint Eastwood and producer Leonardo DiCaprio via Warner Brothers about the wrongly-accused suspect in the crime, released  December 13, 2019 in the USA. The film features two of the band’s performances, the Staples Singers’ “I’ll Take You There” and the band’s original song, “I Walked Alone.”

Often called “The Hardest Working Band in Soul Business,” Jack Mack & The Heart Attack have become known as one of the greatest dance/party bands in the world and lay down an epic R&B sound in the Stax/Volt, Motown, and Muscle Shoals traditions. These tracks are all about soul-drenched vocals, a tight rhythm section, Hammond organ licks, and a hot-to-the-touch horn crew that has raised roofs all over the planet. Vocalist TC Moses is an outstanding frontman who can instantly get any audience up and moving and he and the band were at the top of their form that humid July night in Atlanta. No one could have predicted what was about to happen as The Heart Attack rocked almost 40,000 concert goers and one of the greatest parties ever was quickly transformed into a grimly significant moment in American history.

The set goes hard from the jump and opens with the ultra-funky “(We Got) More Soul,” a brief-but-strong track that serves notice to all within earshot that the fun has begun. The groove engine of drummer Alvino Bennett, bassist Tim Scott, guitarist Andrew Kastner, and keyboardist John Paruolo flexes hard while The Heart Attack Horns soar over the top. The live context shows just how powerful this band is and the audience is clearly fully engaged with their performance.

“Breakin’ Down The Walls” keeps the funk flowing and delivers the socially relevant message that “given love, every child will grow strong.” Just hearing this band play live is an experience in rhythmic bliss and it’s easy to get lost in its deep pockets and dance yourself into a tizzy. The band’s extended version of The Staples Singers’ immortal “I’ll Take You There” is transcendent and is one of two Jack Mack cuts featured in the Richard Jewell film.

The Heart Attack continues to blaze through its show, taking those assembled to school, church, and back home again with a mix of originals and covers. They drop what must be the only version of James Brown’s “Sex Machine” to incorporate the Olympic Games theme, take off with their own “Livin’ It Up,” get down on Reverend Al Green’s anthem ‘Take Me To The River,” and deliver a 12-minute medley of Sly and the Family Stone classics including “Simple Song,” “Stand,” “I Want To Thank You,” and “I Want To Take You Higher” that is simply brilliant.

The band’s final song is the sweet R&B original “I Walked Alone” that’ll also be in the Richard Jewell film. They just finish the song and the crowd’s applause is washing over the stage when the recording is abruptly cut off by the blast of the bomb. That’s where the record ends and the terror begins. We don’t get to hear anything past that point and that’s just as well. The news footage is out there online if anyone who didn’t see it as it unfolded wants to view it. Live From Centennial Park – Atlanta 1996 lets us hear and recall the best moments of that fateful night, the moments that were life-affirming and soul-stirring right up to the point where everything came undone. Jack Mack & The Heart Attack should be proud to put this recording out into the universe and let people hear the amazing show that preceded this tragic event.

For more information on Live From Centennial Park and Jack Mack & The Heart Attack: