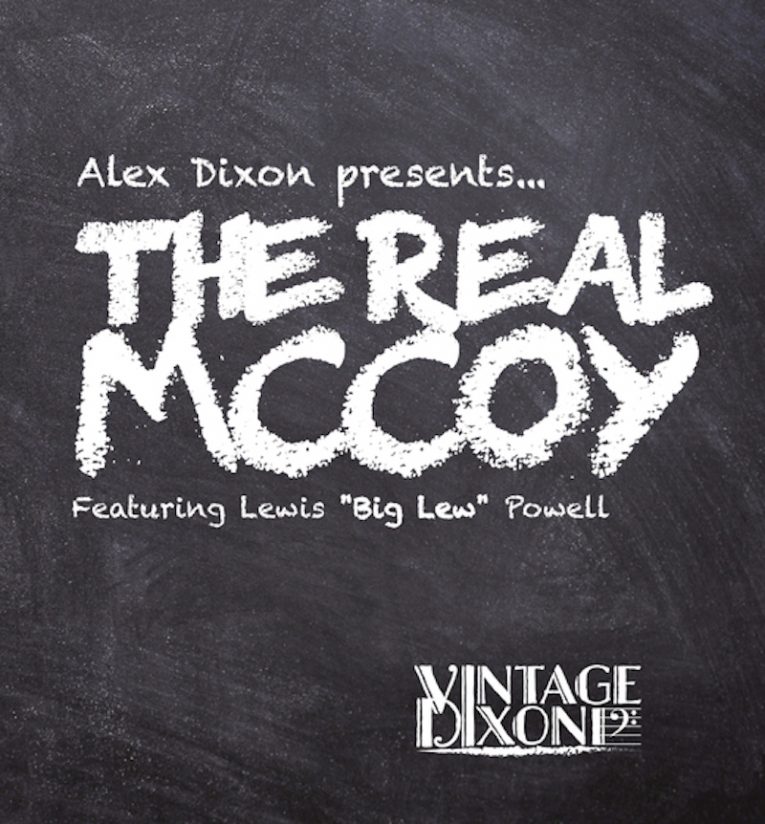 Alex Dixon, Grandson of Blues Titan Willie Dixon, Delivers The Real McCoy out March 2020 and releases single, “Nothing New Under The Sun.”

LOS ANGELES, Calif. — Extending a blues tradition that runs deep in his blood, Alex Dixon —producer, bassist, pianist, and grandson of the late master songwriter, producer, singer, and instrumentalist Willie Dixon —returns to the roots with his new album The Real McCoy, due from his label Dixon Landing Music in March 2020.

The album, which will be available on CD and LP and via streaming services, will be preceded by the leadoff single “Nothing New Under the Sun.” The track is released on January 7, the date on which “Hoochie Coochie Man,” the Muddy Waters classic written by Willie Dixon, was issued in 1954 by Chicago’s Chess Records.

True to its title, The Real McCoy — which introduces lead vocalist Lewis “Big Lew” Powell — is a no-nonsense, straight-ahead Chicago blues opus featuring a lineup of second- and even third-generation blues talent. Steve Bell, son of the late harmonica wizard Carey Bell, is featured on harp, while Alex Dixon’s 13-year-old daughter Leila makes her vocal bow on the single.

Listen to “Nothing New Under The Sun” below

The collection also features harp ace Sugar Blue, who famously collaborated with the Rolling Stones on “Miss You,” their No. 1 hit of 1978; veteran Chicago guitarist Melvin Taylor; and guitarist Joey Delgado, whose string busting has powered East Los Angeles’ Delgado Brothers for more than three decades.

The Real McCoy comprises new original songs written or co-written by Alex Dixon, and four songs penned by Willie Dixon over the course of his storied career: “Groaning the Blues” (recorded by Otis Rush for Cobra Records in 1957); “Howlin’ for My Darlin’” (written with and cut by Howlin’ Wolf for Chess in 1959); “Spider in My Stew” (a hit for Buster Benton on Supreme Records in 1973); and “When I Make Love” (essayed by Margie Evans on Willie Dixon’s own Yambo Records in 1973).

Alex Dixon says of the forthcoming album, “We were trying to go for authenticity, and I wanted to showcase some of the things that I learned from my grandfather and make the album I’ve always wanted to do.”

Born in Chicago and raised there by his grandparents Willie and Marie, Alex played for — and was schooled by — the blues royalty he met in his grandfather’s home.

He recalls, “I got to meet Muddy Waters, and people like Johnny Shines and Johnny Winter — they’d just come by the house. When I was five or six years old, I would play my piano at the house, and my grandfather would kind of show me off, and say, ‘Hey, play this Little Brother Montgomery-style.’ Little Brother Montgomery taught me how to play ’44 Blues.’ Lafayette Leake was my piano teacher. If people say I’m too rock ‘n’ roll, I’ll tell them, ‘Well, my piano teacher played on “Johnny B. Goode.” My grandfather played upright bass. I’m both rock ‘n’ roll and blues.”

Naturally enough, the younger Dixon professionally took up the music he played as a youth after he moved to the Los Angeles area with his grandparents in 1984.

“I’ve been playing blues for the last 30 years, mostly as a songwriter,” Alex says. “I wrote songs with my grandfather; one of them called “Study War No More” was included on his 1989 album, Hidden Charms, which won a Grammy Award for Best Traditional Blues Album.

Alex went on to produce an album with Chicago blues vet Cash McCall and his own set of blues-rock-styled material. The impetus for The Real McCoy came after he met Lewis Powell during the 2015 Chicago Blues Festival, where the birth centennials of Muddy Waters and Willie Dixon were celebrated. Powell was then playing with singer Nellie Travis, who sported her own cross-generational connection to the Dixon family: She was the protégée of Koko Taylor, who had a signature smash hit in 1965 with Willie’s “Wang Dang Doodle.”

Alex says of Big Lew, “I knew he could sing, but I wasn’t sure then what my next project was going to be like. But we started to talk, and we realized we had a similar passion when it came to the blues and what we wanted to do. We went into the studio to see what he could do, and I realized that this was going to be the right guy for me — and a guy that nobody would ever see coming, because nobody had ever heard him sing.” 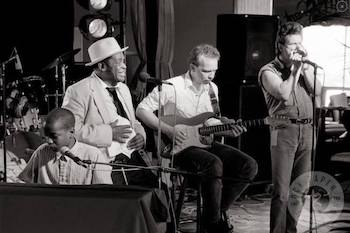 When sessions for The Real McCoy began at EastWest Studios in Hollywood, Alex turned to old friends from the Windy City blues scene. He says, “I’ve known Steve Bell since I was 11 years old — we grew up on the South Side together. Sugar Blue is on there also. I’ve known those guys for a long time. Melvin Taylor is a phenomenal guitar player. We had a studio on the South Side of Chicago called the Blues Factory, and he used to come around when he was a kid and jam with us.”

The result was a project that lives up to its title by successfully recapturing the vigour and ebullience of the greatest Chicago electric blues recordings, and by harkening back to lessons learned directly from one of modern blues’ legends.