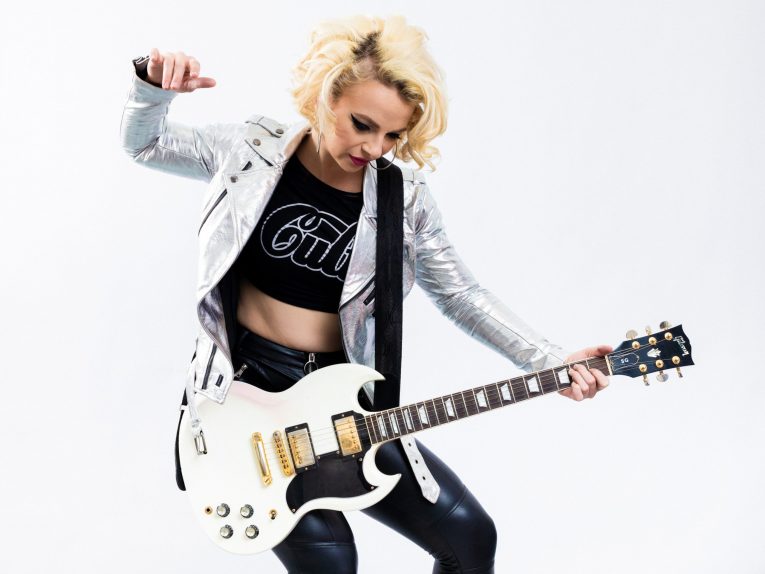 Fish’s incendiary live performances have been mesmerizing audiences all over the world. With her latest release Kill Or Be Kind, the edgy roots rock/blues album, recorded at Royal Studios in Memphis, produced by Grammy winner Scott Billington, she is now fully in the contemporary blues/roots spotlight.

Samantha Fish is considered one of the hottest blues rock guitarists around with high marks from Joe Bonamassa. Guitar World recently voted Fish as one of the “Top 10 Blues Guitarists” in the world.

Samantha Fish released a new radio remix of “Watch It Die,” the second single from her latest hit album, Kill Or Be Kind out now via Rounder Records. Remixed for radio by Grammy-nominated Romesh Dodangoda (Bring Me The Horizon, Motorhead, and more.) Check out the new single below. How can you improve on an already dramatic, hit song by Fish? Romesh did just that with reverb, more present vocals and music, and a different mix with Fish’s voice sounding better than ever. This song is badass.

Listen to the radio remix of “Watch It Die”

You released your album ‘Kill Or Be Kind’ last year to critical acclaim. What was it like to work with Scott Billington and Steve Reynolds?
I greatly enjoyed the experience of working with Scott and Steve. I really had an opportunity to stretch creatively. They both had great input and direction for this album. I felt really comfortable.

What was your favourite part about recording the album?
Probably going back to Memphis, I love it there. Royal studios is rich with history. The albums that were made there are just timeless. It’s a lot to live up to. I also really enjoyed being the only guitar player. That’s a first for me in all the albums I’ve done. A move, I felt, was long overdue. I got the opportunity to stack and layer guitar parts. The whole experience just felt good.

Why did you choose ‘Kill Or Be Kind’ to be the album title?
The title track is a love song, and a somewhat bitter one. It addresses the duality of love and hate in a relationship, focused more towards the end. I felt the message could be a little more universal. It felt timely. The world we live in, we can make it better by the actions we take. It’s all about what you’re willing to put out into the world.

Is there an overall theme to the album?
There are a lot of love songs. Matters of the heart. Beyond that, there is a common thread of growth and coming of age. Standing up for yourself, and even confronting yourself.

Music Radar recently named you as one of ‘The 10 Best Blues Guitarists in the World Today’. How does it feel to be part of that list which is dominated by men such as Chris Buck, Joe Bonamassa and Eric Gales?
It feels kind of crazy honestly. Those guys are monster players, and I’m so proud to be listed amongst them. I feel like I’m just trying to find the right things to say at the right time. I think having representation for women on these lists is so important for up and coming players. I feel honoured to be considered.

This isn’t the only nomination you’ve received – more incl. OffBeat Magazine’s Best of
the Beat Awards and Blues Music Awards – and have now a festival with your name on it
– The Samantha Fish Cigar Box Guitar Festival. What does this all mean to you?
It means I’m busy all the time! The festival went really well, and we’re looking forward to announcing next year. I run a record label with my manager called Wild Heart Records. I’ve been producing and putting out albums for the last couple years. The awards are really nice, it’s like a pat on the back and reassurance that your work is being noticed.

You are back on tour in the UK in February & March after your very successful tour in 2019. What are you looking forward to the most?
I just love touring in the UK. I always look forward to the fans. The bigger venues. Bringing our new album across the pond. This time I’m bringing Nicolas David with me. He’s one of the Wild Heart artists. I produced his last record, “Yesterday’s Gone”. I’m excited to change up the line up and do something really special for our fans in the UK.

What makes the UK special to tour in?
It took a long time. The music fans are particular and have high standards, they are “in the know”. It makes sense when you think about the volume of high-quality music that has come from there. I love the history. I love the people. To finally start having a foothold there, it’s better than winning any award.