A Virtual Cinema Release of ‘Up From the Streets: New Orleans The City of Music’ Starts May 15th 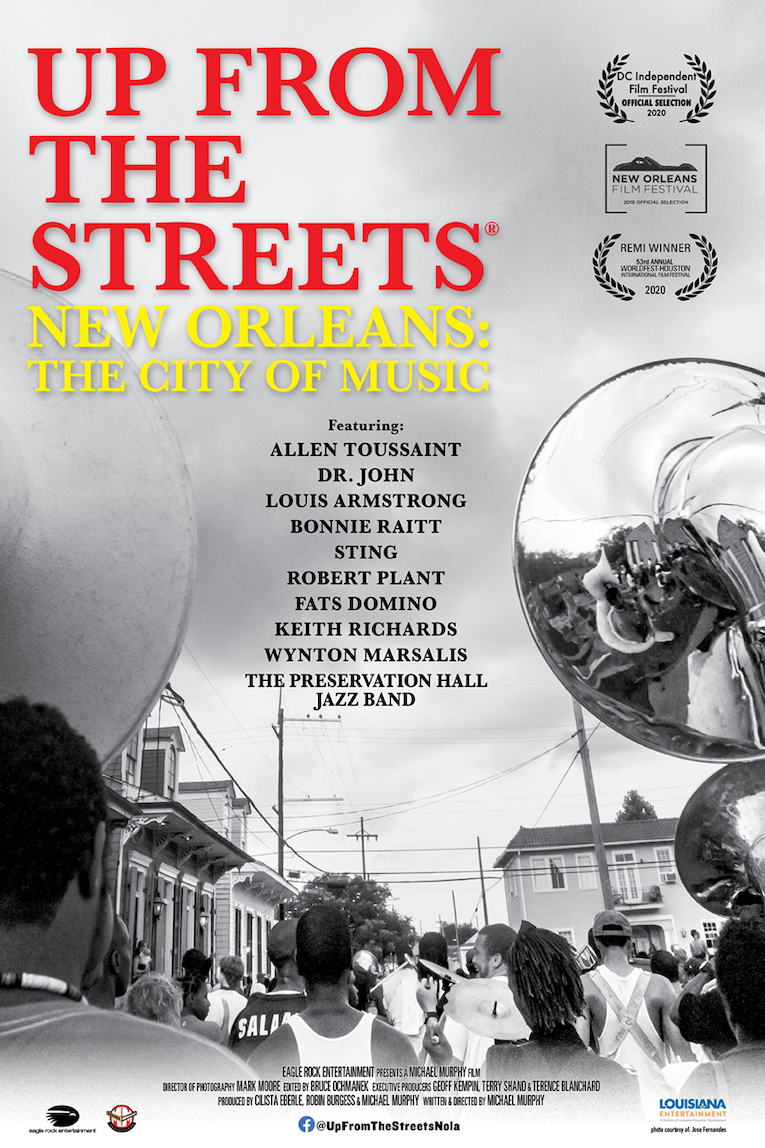 Starting May 15, Eagle Rock Entertainment and Michael Murphy Productions will present a virtual cinema release of the celebrated New Orleans documentary Up From The Streets ®: New Orleans: The City of Music. In an effort to assist the brilliant musical artists of New Orleans, a portion of the proceeds from each $12 “ticket” sale will be donated to The New Orleans Jazz & Heritage Foundation’s Jazz & Heritage Music Relief Fund — a statewide relief initiative supporting Louisiana musicians who have lost income amid the COVID-19 pandemic.

Viewers will be able to buy a ticket to the film from one of their local cinemas and watch the film at home, while supporting their favorite independent movie theaters as they practice social distancing and self-quarantine. Over 50 theaters nationwide are participating. The order will be good for 7 days, and the viewer will have 72 hours to finish the film once they have started watching it. Virtual cinema tickets will be available here.

Watch The “Up From The Streets” Trailer

Originally premiering at the 30th Annual New Orleans Film Festival in October 2019, Up From The Streets explores the unparalleled, historical musical heritage of New Orleans. Produced and directed by Michael Murphy and hosted by Oscar-nominated and six-time Grammy-winning jazz trumpeter / composer Terence Blanchard – Up From The Streets dissects the evolution of the city’s music, from early innovations in Jazz through R&B and Funk. Archival and newly filmed performances by such legends as Louis Armstrong, Fats Domino, Allen Toussaint, Dr. John, The Neville Brothers, and, of course, The Preservation Hall Jazz Band are weaved between conversations with such impactful New Orleans musicians as Branford Marsalis, Wynton Marsalis, Harry Connick, Jr., Mannie Fresh, and Dr. Michael White, as well as commentary by Robert Plant, Keith Richards, Bonnie Raitt, and Sting. “Anyone interested in the culture and music of New Orleans will love this film,” states Terence Blanchard. “The resilience of the people of New Orleans reflects the story of America.”

An intricate study and celebration of a quintessential cultural epicenter, Up From The Streets ®: New Orleans: The City of Music is a definitive look at one of the most influential components of American music.

Additional support is provided by the City of New Orleans “Embrace The Culture” series utilizing resources to activate art through virtual experiences.