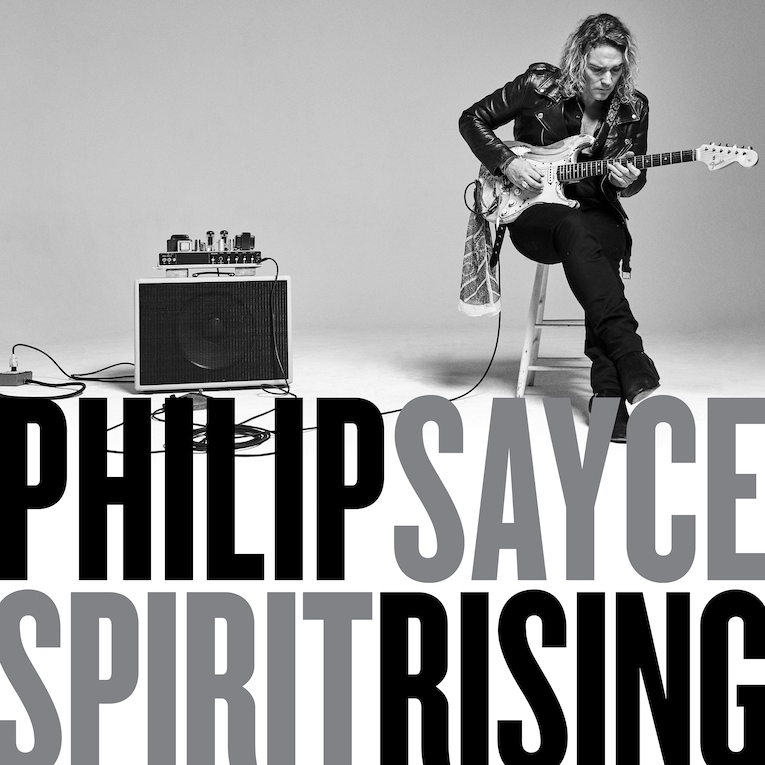 Philip Sayce comes out swinging on his brand-new record Spirit Rising, a hot-handed, career-making effort that drops April 24th, 2020 via Warner Music Group. Sayce is an immensely talented guitarist and vocalist with a mind-bending blues/rock style that invokes the giants of the past while simultaneously bringing the idea of rock music into the present and beyond. The record covers a ton of stylistic ground and genuinely expresses all that Sayce is and does. This time out, he worked with songwriters including Richard Marx, the L.A. writing team/band Distant Cousins, and Toronto’s Gavin Brown and Maia Davies, resulting in an album that seamlessly moves from blazing guitars to deep soul music. Through it all, Sayce brings listeners the kind of thrills that lead to stardom.

Sayce began his ascent as a protégé of the late Jeff Healy at the end of the 1990s in Toronto. After touring internationally with Healy’s band, Sayce moved to Los Angeles and began a four-year run with the great Melissa Etheridge. He finally went solo in 2009 and built up a large and enthusiastic fan base in Europe, touring the continent with major stars like Deep Purple and ZZ Top. Putting in all this work brought him to the attention of Warner Music Canada in 2015 and the rest is history. Sayce has since grown to be an artist that’s impossible to pigeonhole and one who attracts new hardcore fans with each new release and performance.

Spirit Rising kicks off with bold and brash guitar freestyle “Warning Shot,” which is 50 seconds of notes, noise, and quasi-psychedelic bravado that more than lives up to its title. This leads into the fiercely rocking “Fits Me Good,” a heavy blues-influenced cut full of hot licks and tough-toned vocals. Sayce instinctively knows when to hold back and when to go for the gusto and he makes the song hit a new gear when he stomps on the gas. He continues with the mid-speed “Black Roller Coming,” an atmospheric rock song that sits somewhere between ZZ Top and Soundgarden. Sayce is unafraid to let his inspirations mix and mingle with his personal musical concepts and that fearlessness powers up this track and the entire album.

On “Once,” Sayce shifts into a beautiful clean-toned mode that combines Hendrix and Beatles DNA with his own energetic lead playing and soulful vocals. It’s a short song but Sayce’s expressiveness makes it one of the album’s best selections. These softer moments are often mishandled by lesser talents but Sayce shines brightly in this more delicate situation. “Give Me Time” is a cool soul tune with a touch of Joe South to it that really lets Sayce put his vocal skills to the test. He soars over a tight pocket that supports him perfectly and makes the whole band sparkle.

“One Foot On The Gravel” is a heavied-up tale of hard living and self-destruction set to a beefy 7#9 groove. The full line is “one foot on the gravel and one foot in the grave” and it’s definitely Sayce’s “Hellhound On My Trail” moment. It acknowledges the darkness inside and surrenders to it, making it as frightening lyrically as it is musically. Sayce puts down some of his most intense playing on the record here and it gives listeners a glimpse into the ragged edge of his soul.

Spirit Rising is a stunning release that shows us a reinvented Sayce pushing hard to realize his immense potential. He displays the strength, style, and songs needed to strike rock and roll pay dirt and the sheer artistry to make it look easy. If the best guitar record of 2020 is what you seek, you’ll find this one near the top of the list. Get after it.