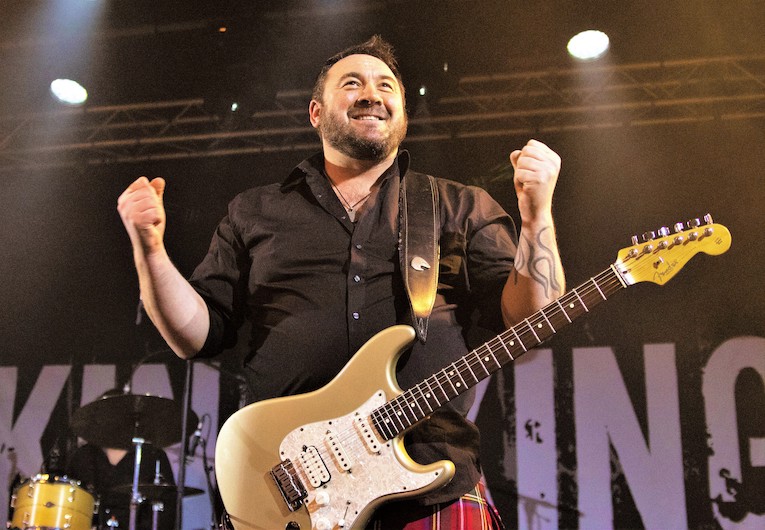 British blues-rock sensation and multi award-winning UK band, King King, has released four studio albums, one live album and two EPs. Their latest Exile & Grace, received critical acclaim. This is one rockin’ group with plenty of soul and swagger and is led by singer/guitarist Alan Nimmo. Stevie Nimmo of the Nimmo Brothers, recently joined the band. Listen to King King’s new single “I Will Not Fall” below. The band will be releasing a new album in the Fall and will tour the UK in October 2020 and February 2021.

Rock and Blues Muse touched base with Alan Nimmo, frontman for King King.

Rock and Blues Muse
Those of us who know The Nimmo Brothers’ music, are excited about Stevie Nimmo joining King King. What brought you to the decision to bring in Stevie now? What are your plans for his role in the band going forward?

Alan Nimmo
I have felt for a while now that the band could use another guitar and an extra backing vocal as the progression of the live performance and the song writing has risen in the last year or so. I pride myself on my personal connection with our audience, it’s a huge part of King King’s appeal and as the live show and the songwriting got more and more complex I wanted to make sure that that connection was never compromised. There’s also the added vocal strength in that my brother and I have a real special chemistry together both on and off the stage so it’s going to make the live shows even more special for the fans watching… when it came to making the decision about bringing another player in to the band there was no other choice than Stevie. In fact, if it wasn’t him, it wouldn’t have been anyone!

Rock and Blues Muse
Your new single “I Will Not Fall” is from your upcoming album. Can you tell me about it? Your concept for it and when it will be released?

Alan Nimmo
I never try to think too much in to purposely having a theme for an album… I wrote about how I’m feeling at that time and I suppose how I was feeling when we were writing this one was a sense of worry about the state of our world (which as it turns out is quite apt.) and at the same time I was dealing with some closer to home issues with wanting to make a point of staying strong and positive… finding a renewed passion for my art and holding up a proverbial “Stop” sign to people and parts of the industry who have it in their nature to take advantage of others for their own gain and stifle your growth!

Rock and Blues Muse
In press information you are quoted as saying, “I reached a stage that I wanted to regain control of my life, career and future. I made several changes within the band and people surrounding the band. That was a lot of changes at one time. It was a daunting feeling, but they were important decisions that had to be made.”

Can you tell me about that? What prompted you to make the decisions you did?

Alan Nimmo
I will say that from the most positive point of view regarding the band… it’s sound and it’s future. The changes made were for the better of King King and for me. The lads that have come in are spectacular guys, great musicians, and even better friends so all of that mixed together, as people will see when they watch us playing just makes for a great sound and a great time! There were no fall outs with previous members in fact… Lindsay Coulson our old Bass player for example is one of, if not my closest friend, and he has been there in the background since he left helping with the new changes, offering help and advice to me and to the other lads and encouraging the success of the band as it moves forward. I truly thank him for that.

Rock and Blues Muse
You are performing with Kenny Wayne Shepherd Band for Planet Rock’s ‘Rocktober’ in October 2020. They are a great match for your music.

Alan Nimmo
It’s amazing to be doing another festival alongside KWS. I’ve been a fan of his since his first album was released all those years ago. He’s one of the finest guitarists around and a great guy, too! He’s got a great band with him and Noah, his vocalist, is an amazing singer and another cool dude! I really look forward to seeing them at Rocktober! Fans who will be attending this are in for a real treat!

Rock and Blues Muse
This might sound like a silly question, but some of our followers/subscribers noticed that you weren’t wearing your kilt on the image for your “I Will Not Fall” single. Your kilt has been part of your signature look. Are you keeping it?

Alan Nimmo
Ha ha! Yes, don’t fret good people! The kilt is here to stay for the foreseeable future anyway! I don’t wear the kilt in my everyday life and to be honest, on the day that those photos were taken… the kilt was in the wash!!

Rock and Blues Muse
COVID-19 pandemic has been so tough on everyone. What are you up to now since you can’t be on the road just yet?

Alan Nimmo
Yes, it is a tough time for all of us now with the pandemic, but this is a problem that the whole world has, and it is bigger than the music business. Of course it’s tough financially as well as mentally and physically too for those poor souls suffering from the virus and especially for the key and frontline workers in hospitals, care homes and other vulnerable places. Our heart and best wishes go out to those who are face to face with this on a daily basis!

For the rest of us, we have been asked to sit at home with our families, go out and get a bit of exercise and keep a healthy distance from one and other when we’re out getting our shopping!!! It’s not much to ask in order to save your own and other lives is it? We’re just preparing for the upcoming tour dates in the hope that they’ll go ahead as planned and preparing for the release of the new album in the Autumn! This with the task of looking after family and pets is what life is now, pretty much the same, but just without the touring!

Listen to “I Will Not Fall”

King King’s new single “I Will Not Fall” is available on all streaming platforms here.