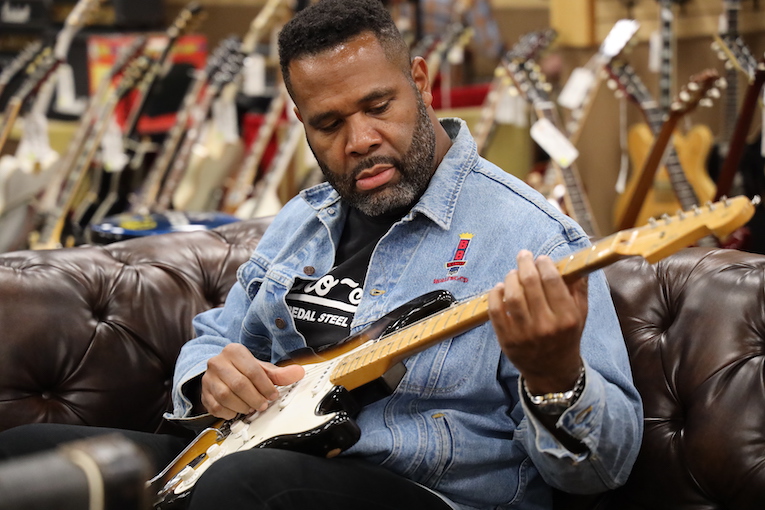 Widely considered one of the best Blues guitarists in the world, Kirk Fletcher has earned the respect of critics, peers and fans across the globe. He is a four-time Blues Music Award and 2015 British Blues Award nominee. As lead guitarist for The Fabulous Thunderbirds for four years, he has also performed with a variety of well-known artists including Joe Bonamassa, The Mannish Boys, Charlie Musselwhite, Cyndi Lauper, Michelle Branch, Doyle Bramhall and collaborated with blues greats such as Pinetop Perkins, James Cotton, Hubert Sumlin, and Robben Ford.

Fletcher is a unique and dynamic guitar player, singer-songwriter, who blends contemporary blues, soul, gospel, rock, and jazz. His latest album, Hold On, was nominated in 2019 for a Blues Music Award in the “Contemporary Blues Album” category. With five solo studio albums to his name, Fletcher has also played guitar on so many other artists’ albums, there are too many to list here.

Martine: Your album, Hold On, is an outstanding album. Great Blues, R&B, gospel, jazz, rock and funky rhythms. Can you tell me about it?

Kirk: Hold On is a collection of songs I wrote myself mostly. It was a record I had to make. I had to prove to myself I could do it by myself. It was an album of reflection over my life and how I felt about things. And I was so lucky to find two musicians that were willing to go with me–Jonny Henderson on organ and Matt Brown on drums. I wanted to write songs and present them in a classic organ trio format but not play jazz really. The environment was so easy to work in and I feel you can hear that on the record.

Martine: That definitely comes through. Your instrumental “Dupree” on Hold On really grabbed me. It’s a tribute to one of your heroes, Cornell Dupree. Please tell me about how you came to write this song.

Kirk: I wrote that main riff standing in front of a mirror!! Hahahahaha! I do that from time to time. It’s good practice to play in front of a mirror. I just thought of some groove he might play in the key of E and wrote a B section. And we finished the structure in the studio with the guys. Any way I can pay respect to Cornell Dupree I will. 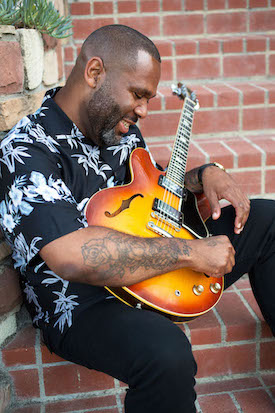 Martine: You live in Switzerland but make it out to the U.S. several times a year. You play/perform with Josh Smith and Joe Bonamassa when you come here. Any projects in the works  with either of them?

Martine: You must have a blast playing with Josh Smith. When I interviewed him, he spoke so highly of you. What’s it like playing/performing with him?

Kirk: Me and Josh are like brothers and we have a lot of musical background in common so we relate age-wise and influence-wise. And he is absolutely amazing guitar player! We have this bond. He gets me and I get him. We are also different too so that’s a good mix.

Martine: You also performed with Joe Bonamassa in live shows and his live albums Muddy Wolf at Red Rocks and Live at the Greek. Tell me about that.

Kirk: Those experiences were just amazing. Joe is a dear friend, and we went out and had a great time. He treated me like a king.

Martine: Do you have plans for another solo album?

Kirk: I have a new record coming out later in the year.

Martine: That’s exciting. Tell me about it.

Kirk: My upcoming record was recorded over Christmas holidays last year in L.A. My direction for the new record was to make a “Blues” record my way. I wanted to combine a lot of things I love. There was a time in the 1980’s when blues musicians like Robert Cray, Fabulous Thunderbirds, and a lot more were making fantastic blues based records with a pop edge to them production wise. I kinda wanted to take a bit of that and combine it with some leaner Chicago blues. So, we have a Blues record first and foremost. It’s about half & half originals and covers. I called on my buddy Richard Cousins to help me co-write a couple songs. And I do covers by AC Reed, Juke Boy Bonner Sonny Boy Williamson and Chris Cain. And it has other surprises on it too.

Martine: Can you tell me how you got into the Blues?

Kirk: Honestly, I can’t remember an exact time, because Blues always seemed to be around. Blues is so connected with gospel and soul, I always thought of it in the same way. I heard my mom talk about Blues artists she heard growing up in Arkansas. People like Muddy Waters B.B. King, Bobby Bland and so on. When I got a little older and heard some of these people it made so much sense to me. I loved it so much. I would say what really changed my life, was seeing Albert Collins at 13 or so.

Martine: Who are your major Blues influences?

Kirk: That is a hard question to answer, but the many periods of B.B. King, Chicago Blues from the late 40’s to the 70’s. Then you have that mixed with the Texas players and West coast players. And the Texas players that moved to the West Coast (hahahaha!) like Johnny Guitar Watson, T Bone Walker.

Martine: How did you become such an outstanding guitar player, and not just technically good but with such feeling?

Kirk: Awe, thank you. I feel that my playing comes from many years of editing out the stuff I don’t want in it. I don’t feel I’ve gotten technically better per se, but I feel I can connect to my heart and feelings easier. I guess I don’t take it that seriously. But I do take music serious and my love for it.

Martine: With the COVID-19 pandemic, it has affected the music industry in a drastic way.What are you doing musically with your time right now? How are you coping with not touring?

Kirk: I’m in a funk sometimes and I listen to music to heal me. I think of why I play music in the first place. Because I love it!! I put on an Earl Hooker record the other day and I got so excited by the sound. It’s hard, and yes, all touring is postponed. I’m going to finally wrap my head    around home recording and write songs.

Martine: What are your plans musically going forward in light of the pandemic?

Kirk: To play more Blues and write songs in that genre more. It’s where I live most comfortable.

For more information about Kirk Fletcher: