Single Premiere: “Devil’s Hostage” by Too Slim and the Taildraggers 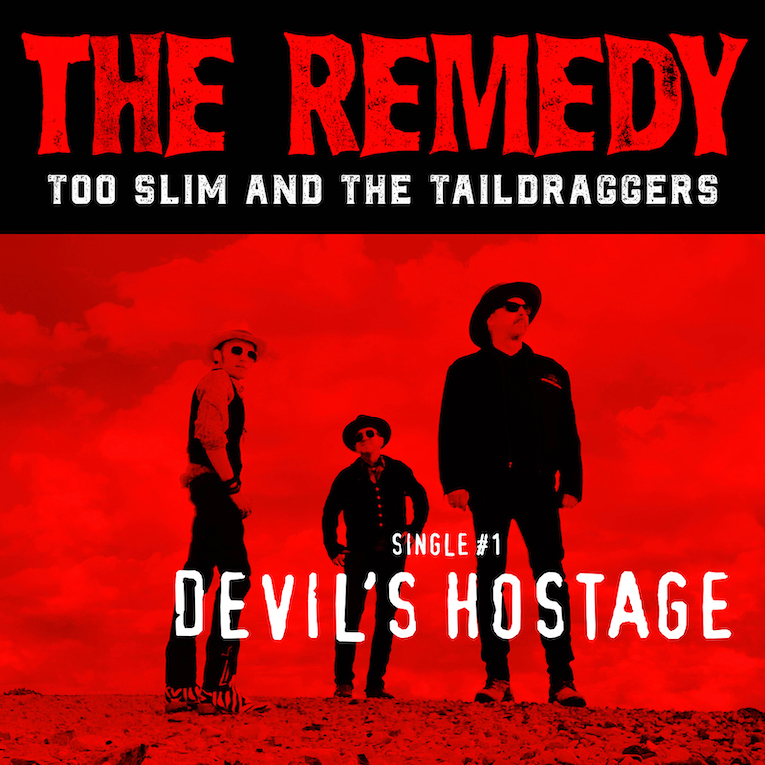 Too Slim and the Taildraggers

We are very pleased to premiere “Devil’s Hostage” by contemporary blues rockers and multi-award winners Too Slim and the Taildraggers, from their upcoming album, The Remedy, out July 17 via Vizztone/Underworld Records.

And this is one red hot blues/rock single. Not surprising considering Too Slim and the Taildraggers’ last album, the highly acclaimed High Desert Heat.

“Devil’s Hostage” is a down and dirty blues/rock number with Tim Langford’s raspy, soulful vocals and slinky guitar riffs. Hints of Billy Gibbons surface on this tune but it’s deeply rooted in Too Slim and The Taildraggers’ own unique style. Awesome song if you ask me.

Tim “Too Slim” Langford says, “When I was writing this song, I remembered once reading a story that if you are given a gift and didn’t use it, it would be taken away from you. The story was in regards to any kind of special talent whether it be… being able to play a musical instrument or sing, paint, write etc. When I decided I wanted to play guitar I was obsessed about it. I would practice all night after school. I would fall asleep with the guitar and just wanted to be the best. The title “Devils Hostage” kind of created an image and story in my head, a kind of Robert Johnson devil at the crossroads story. So when I started the lyrics I thought how music is a gift and that if a person was given a talent and used it wisely, that they could have the life they imagined.”

Langford continues, “In the blues and rock world, people who have these gifts often end up being sidetracked by things that distract them from their original goal, which was to master their craft that they felt so passionate about. I felt that my life followed a similar path. I originally just wanted to be able to play the guitar the best I could, and emulate the people I looked up to for inspiration. I felt that once I reached a certain level of skill, that I also fell prey to the demons of the music business and lost my way at some point. I wanted fame, money, sex, drugs and rock n roll, as the saying goes.

The song is a semi biographical story about myself I guess. I felt I was given a gift, and eventually took it for granted. I made mistakes along the way. I learned the lessons the hard way, and finally felt I had sold my soul to the devil. I had sacrificed my family, morals, and health along the way. Eventually you hit a bottom and have to ask God for forgiveness for not staying true to the gift he had trusted you with. Another tale of Sin and Redemption I suppose.”

Listen to “Devil’s Hostage” Below

From Spokane Washington, Tim “Too Slim” Langford is a monster guitarist and unabashed blues-rocker. He has won multiple awards for Best Guitarist, Best Slide Guitarist, Best Songwriter and he and the band are in The Hall of Fame in three Northwest Blues Societies.

The Remedy is the follow up to the band’s highly acclaimed High Desert Heat, which was nominated for a 2019 Blues Music Award in the Blues-Rock Album category. Too Slim and the Taildraggers have 14 studio albums and five live albums and are highly acclaimed as an outstanding band.

Recorded in Nashville at Taildragger bassist Zach Kasik’s Wild Feather Recording studio The Remedy, produced by Too Slim and the Taildraggers, features ten new original songs and a cover of the Elmore James classic “Sunnyland Train.” There’s lots of big guitars plus some well-placed banjo, slide guitar, and serious harmony vocals from the band — the continuing evolution of the Taildragger sound. The new release ranges from straight ahead Blues to Blues Rock and Americana. Also featured are guest appearances from some of the band’s favorite harmonica players – Jason Ricci, Richard Rosenblatt and Sheldon Ziro.

Too Slim and the Taildraggers high energy blues/rock has been thrilling audiences for years. The band’s ever evolving musical direction keeps fans riveted to their music, to their outstanding musicianship and live performances. The band is made up of Tim “Too Slim” Langford on guitar and vocals, Jeffrey “Shakey” Fowlkes on drums, and Zach Kasik on bass and vocals.

Too Slim and the Taildraggers Online